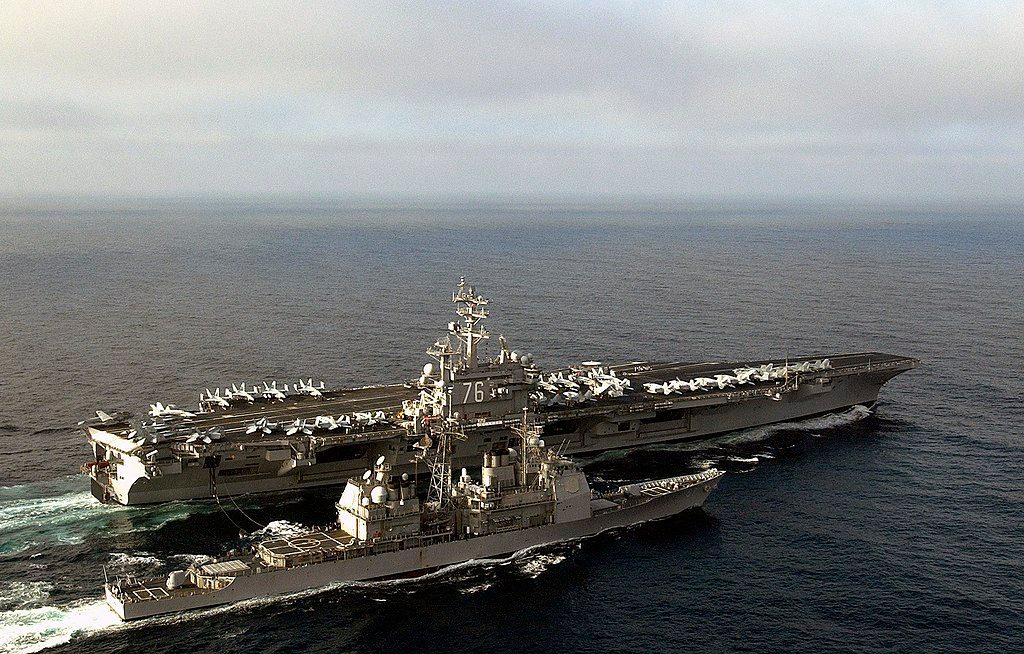 HONG KONG – A US aircraft carrier and its strike group have returned to the South China Sea after a port call in Singapore, deploying in the disputed region as tensions with China rise over a possible visit to Taiwan by congressional leader Nancy Pelosi.

Officials with the US Navy’s Seventh Fleet confirmed the deployment of the USS Ronald Reagan to the vital trade route but did not comment on questions about tensions over the trip by Pelosi, speaker of the US House of Representatives.

“USS Ronald Reagan and her strike group are underway, operating in the South China Sea following a successful port visit to Singapore,” Commander Hayley Sims said in a statement to Reuters. Sims added that the Reagan “is continuing normal, scheduled operations as part of her routine patrol in support of a free and open Indo-Pacific.”

When asked for comment, China’s foreign ministry said the US was once again “flexing its muscles” in the South China Sea with the Reagan’s sailing.

“It is clear from this for everyone to see who is the biggest threat to the South China Sea and the Asian region’s peace and stability,” Chinese foreign ministry spokesman Zhao Lijian told a regular briefing on Thursday, July 28.

News of the deployment of the Japan-based carrier comes as Beijing and Washington trade diplomatic blows over Pelosi’s visit, reportedly due to take place next month after being postponed earlier in the year. Pelosi has not confirmed the possible trip.

US Defense Secretary Lloyd Austin said on Wednesday he had spoken with Pelosi and given her a security assessment but any comments about a trip she might make to Taiwan would have to come from her office.

Tensions over democratically-ruled Taiwan are expected to be discussed when US President Joe Biden and Chinese President Xi Jinping hold their fifth phone call, which could take place as soon as Thursday.

China has issued stern warnings to US officials about Pelosi’s possible visit to Taiwan, a Chinese foreign ministry spokesman said on Monday. Beijing considers Taiwan to be part of its territory and has never renounced using force to bring the island under its control. The Reagan strike group had been operating in the South China Sea earlier in the month before heading for a five-day rest stop in Singapore at the weekend.

Singapore-based security scholar Ian Storey said he would expect Chinese vessels to shadow the strike group, based on recent actions as well as the latest tensions.

“Most of the time those interactions are safe and professional, but there’s always a risk they could get too close and spark a confrontation, said Storey, of the ISEAS-Yusof Ishak Institute.

US officials on Tuesday accused China of increased “provocations” against rival claimants in the South China Sea and said its “aggressive and irresponsible behavior” meant it was only a matter of time before there was a major incident or accident. – Rappler.com