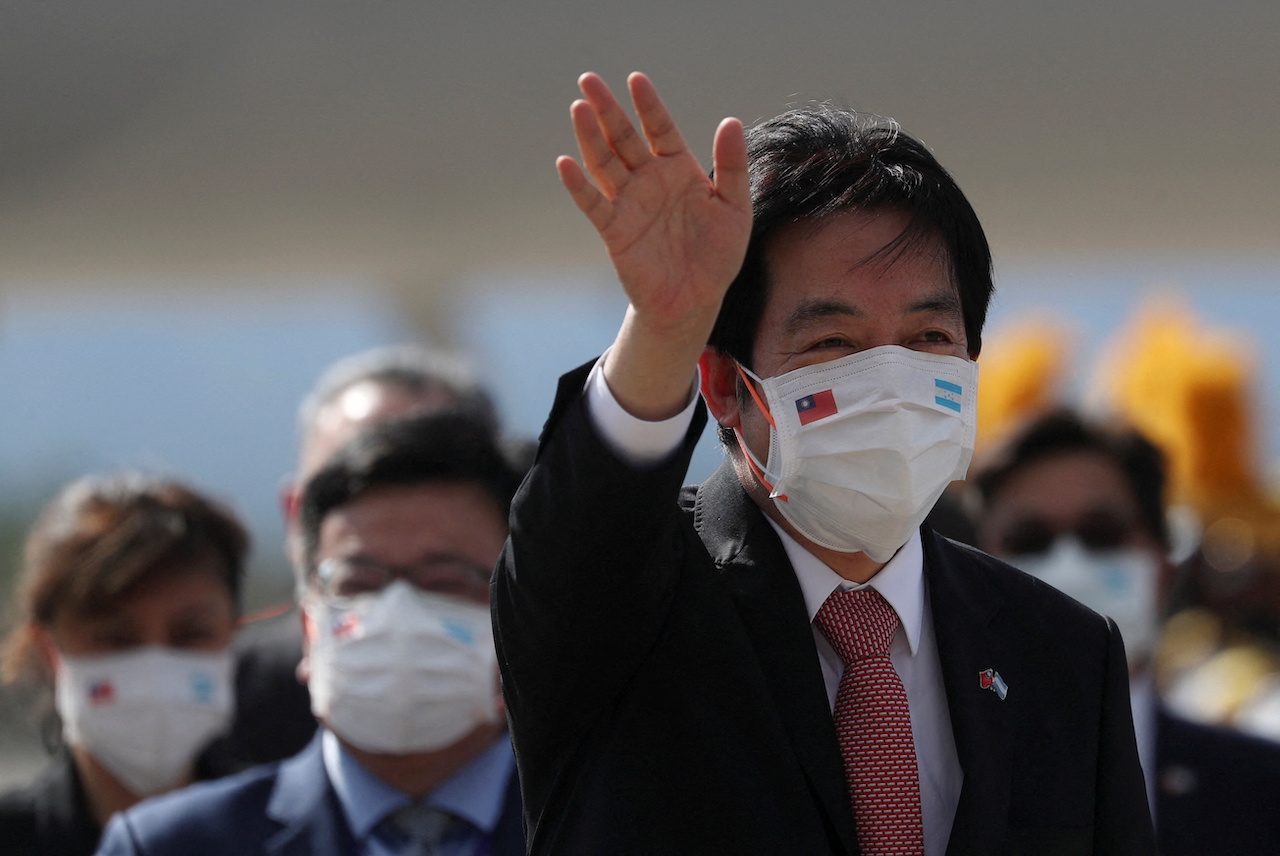 IN HONDURAS. Prior to his US visit, Taiwan's Vice President William Lai arrives to attend the swearing-in ceremony of Honduras' President-elect Xiomara Castro, January 26, 2022.

Facebook Twitter Copy URL
Copied
(1st UPDATE) Vice President William Lai, in thanking a US senator, says he was 'especially grateful to her last year when Taiwan was unable to obtain vaccines due to the China factor'

TAIPEI, Taiwan (1st UPDATE) – Taiwan Vice President William Lai used his final day in the United States to repeat an accusation that China blocked the island from obtaining COVID-19 vaccines last year, and to thank a US lawmaker for her role in donating the inoculations.

Last May, Taiwan President Tsai Ing-wen accused China of blocking a deal with Germany’s BioNTech SE for COVID-19 vaccines, after Beijing offered the shots to the island via a Chinese company just as Taiwan was dealing with a rise in domestic infections.

Beijing has angrily denied trying to stop Taiwan getting vaccines, and also offered Chinese-developed shots which the island rejected, citing safety concerns. China claims Taiwan as its own territory.

Speaking to the Illinois Democrat during a stop over in San Francisco while on the way back to Taiwan from Honduras, Lai offered his thanks.

Lai said he was “especially grateful to her last year when Taiwan was unable to obtain vaccines due to the China factor,” Taiwan’s presidential office said, citing the de facto US ambassador to Washington Hsiao Bi-khim, who is accompanying Lai.

“She not only actively advocated that the Biden administration should provide vaccines to Taiwan, but also personally went to Taiwan to announce that the United States would donate Taiwan vaccines.”

In Beijing, China’s foreign ministry said Lai’s accusation was “total fiction”, calling it a “malicious slandering and smearing of the true face of the mainland.”

But that was only after Taiwan’s government allowed major Apple Inc supplier Foxconn, as well as its high-profile billionaire founder, Terry Gou, along with Taiwan Semiconductor Manufacturing Co Ltd and a Taiwanese Buddhist group to negotiate on its behalf for the doses.

While Lai, a possible presidential candidate in 2024, was ostensibly abroad for the new Honduran president’s inauguration, he made good use of his time to engage in diplomacy with the United States, Taiwan’s most important international backer and arms supplier.

He briefly talked to US Vice President Kamala Harris while in Honduras, drawing Chinese anger, and on Friday had a virtual meeting with US House of Representatives Speaker Nancy Pelosi.

That hour-long discussion focussed on military issues including “the proper preparations Taiwan” should have to maintain security and stability in the Taiwan Strait, the statement said.

China has never renounced the use of force to bring Taiwan under its control. – Rappler.com