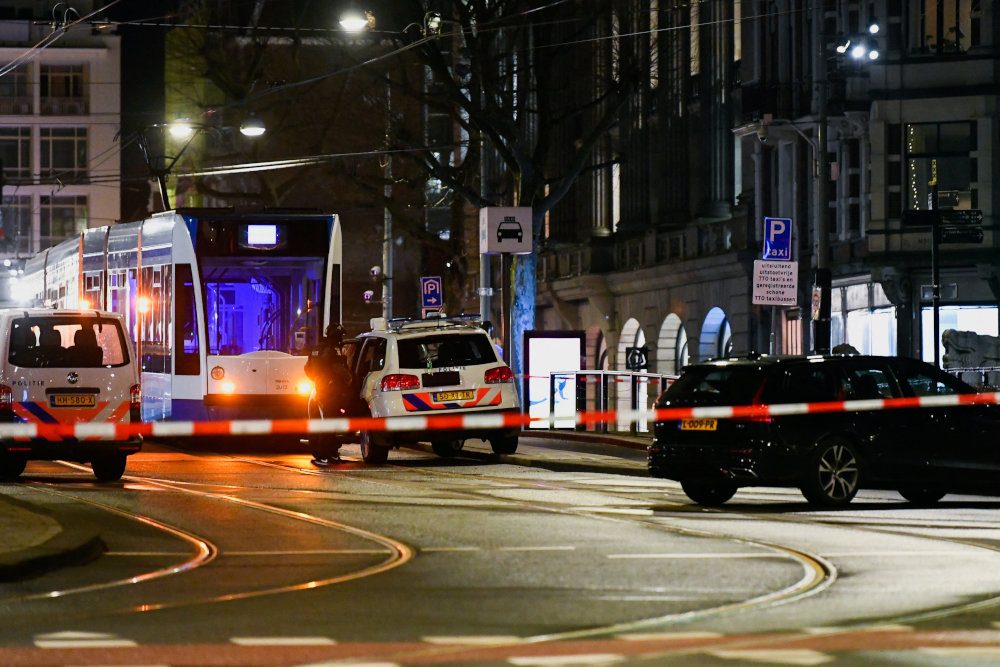 HOSTAGE-TAKING. A police officer stands next to a police vehicle near an Apple store in central Amsterdam during a hostage incident in the store, in Amsterdam, Netherlands on February 22, 2022.

Facebook Twitter Copy URL
Copied
Police arrest the suspected hostage taker, a 27-year old man from Amsterdam, after he ran out of the Apple store at the central Leidseplein square

AMSTERDAM, The Netherlands – Dutch police ended a hostage taking in an Apple flagship store in Amsterdam after a man armed with two guns held at least one person hostage for hours, police said on Wednesday, February 23.

Police arrested the suspected hostage taker, a 27-year old man from Amsterdam, after he ran out of the building at the central Leidseplein square, shortly after 10:30 pm (2130 GMT) on Tuesday.

“We managed to end the situation by hitting the hostage taker with a car when he ran outside,” police said on Twitter, adding that the man was being treated for serious injuries.

The man had carried a pistol and an automatic rifle, with which he fired at least four shots when police arrived at the square around 6 pm, Amsterdam police chief Frank Pauw told a news conference early on Wednesday.

The man, who had a criminal record, had contacted the police himself during the hostage taking, demanding a ransom of 200 million euros ($226 million) in crypto currencies and a safe passage out of the building, Pauw said.

“He threatened a hostage with a gun and threatened to blow himself up, so we took it very seriously”, Amsterdam newspaper Parool quoted the police chief as saying.

The situation ended when the hostage, reportedly a 44-year old British man, fled from the building when a police robot delivered water at the door of the store at the request of the hostage taker.

The hostage taker ran after the man and was quickly hit by the car.

“The hostage played a heroic role by forcing a breakthrough,” Pauw said. “Otherwise, this could have been a long night.”

During the evening, about 70 people were able to leave the store while the hostage-taking was going on. There were no reports of any other injuries.

The hostage taker was seriously injured, but able to speak when he was arrested, police said. – Rappler.com