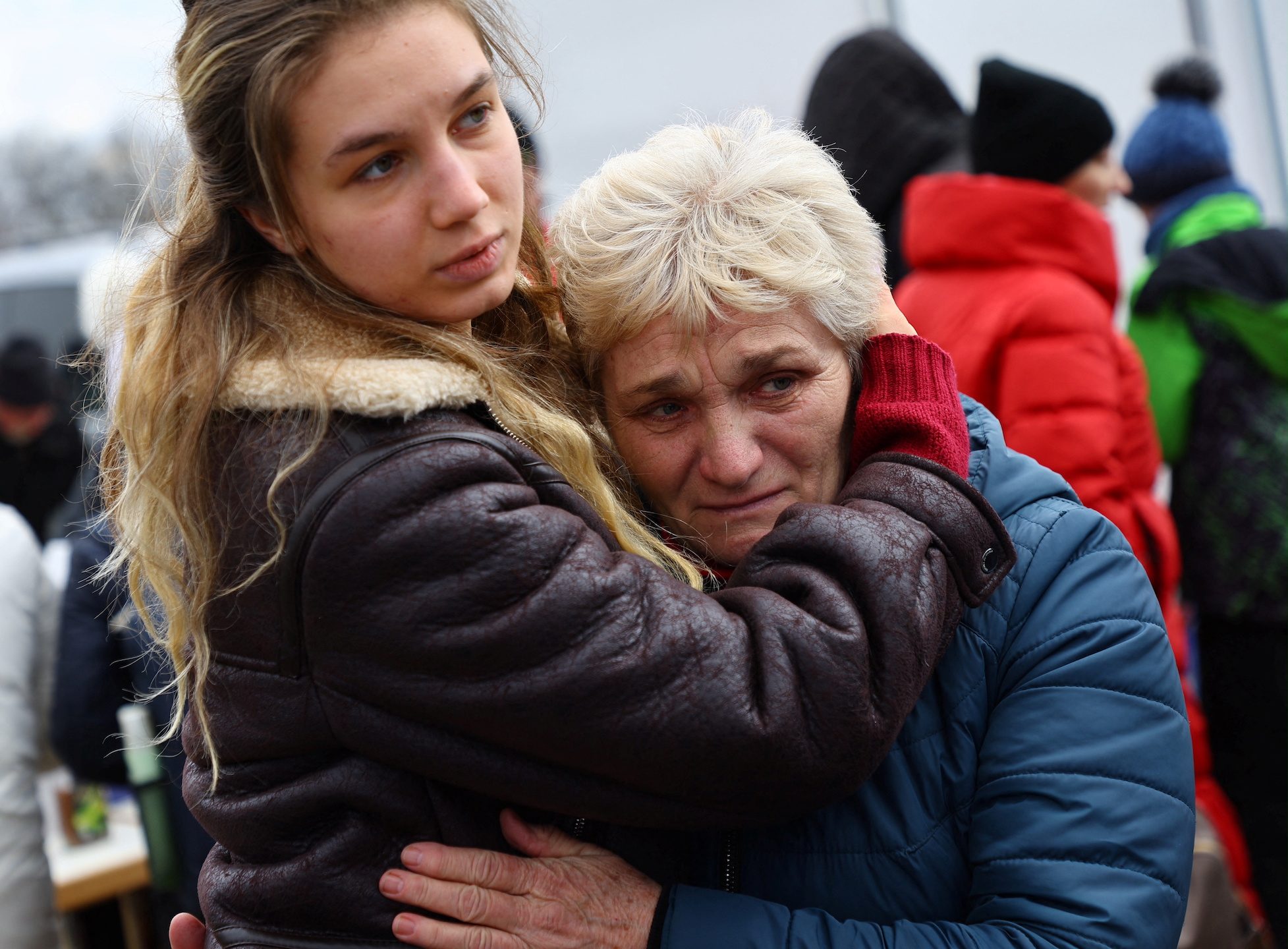 Katerina, living in Krakow comforts her grandmother Valentina, who fled from Krywyj Rih, after the Russian invasion of Ukraine, outside a temporary accommodation and transport hub for refugees, in Przemysl, Poland, March 8, 2022. REUTERS/Fabrizio Bensch

Thousands more Ukrainian refugees fled to central and eastern Europe on Wednesday, March 9, many with no contacts and nowhere to go, as host countries scrambled to accommodate them.

Since Russia invaded Ukraine on February 24, the number of refugees has probably reached 2.1-2.2 million, the head of the UN Refugee Agency (UNHCR), Filippo Grandi, said.

Most are women and children, as men stay home to fight.

So far, most refugees have gone to relatives, friends or contacts in the Ukrainian diaspora rather than to reception centers being set up by authorities, Grandi said.

“This is the best way for them to feel welcomed, to feel in a familiar environment and also have less burden on public services, frankly, which is very important for these countries,” he said.

But this was likely to change as more refugees arrive and more will need to stay in reception centers, Grandi said, adding: “We need to be realistic and we need to plan for that.”

Some signs of that trend are appearing at Przemysl, a town near Poland’s busiest border crossing that has become a transit hub for refugees.

“At the start, about 90-95% were people who had a place to go, now there’s many more people looking for a place to go and where someone will take care of them,” Mayor Wojciech Bakun told reporters, speaking in front of the train station where refugees arrive from Ukraine. “They don’t have friends or relatives.”

Alina Kondrashova, 33, a doctor from Krivoy Rog in Ukraine, who arrived in Przemysl on Wednesday with her three-year-old, mother, sister and her sister’s baby, was hoping to travel on to Estonia by bus.

“We don’t have family there, but my mother was born there during Soviet times and there’s a place to stay,” she told Reuters at the train station, where the temperature was -1 degree Celsius (30 degrees Fahrenheit) and snow fell.

Another arrival at the train station was Viktor from Makariv near Kyiv, a 64-year-old school security guard who said he did not know anyone in Poland. “I’d like to stay here in Poland andreturn when all of this ends,” he said.

In Romania, authorities in Bucharest opened two centers for Ukrainian children to play and do activities before they move on elsewhere with their families.

At the Siret border crossing, refugees continued to cross from Ukraine on foot and by car, most carrying backpacks and dragging suitcases. Some carried pets.

They are welcomed by volunteers offering hot drinks, food and a smile. Traveling by train remains free for Ukrainian refugees.

Further south, dozens of women and children crossed the Danube by barge from Orlivka in Ukraine to Isaccea in Romania, huddling in winter coats against the bitter wind.

Romanian firefighters helped them carry children and luggage to shore and into orange tents put up as shelter from the cold.

In Warsaw, Mayor Rafal Trzaskowski met with leaders of non-governmental organizations to find ways to meet what they described as the biggest humanitarian crisis the city faced since the end of World War Two.

In the central Polish city of Lodz, a regional agency asked people not to donate any more blood for now because it has had so many donations in recent days, but to come back later, when the supply is lower.

Back in Przemysl, signs were put up in shelters in Ukrainian, Russian, Polish and English encouraging refugees to think safety when taking a lift. “Take a selfie with the driver – if they refuse, don’t go with them” and “Avoid tired drivers”, some read.

Moscow calls its action a “special military operation” to disarm its neighbor and dislodge leaders it calls “neo-Nazis.”

Kyiv and its Western allies dismiss that as a baseless pretext for an unprovoked war against a democratic country of 44 million people.

The UNHCR is planning a cash programme for refugees that could help them pay rent in private accommodation. “It will start hopefully by this week in Poland,” Grandi said. “We will try to do this to complement what governments are doing.”

The United Nations’ plans are based on four million refugees arriving but Grandi said the number will likely have to be revised upwards.

More than 1.3 million people have crossed into Poland since the war began, while nearly 320,000 have crossed into Romania – more than half entering via non-EU member Moldova – and 153,000 having entered Slovakia, officials said. – Rappler.com