Leaving behind possessions and pets, Ukrainians flee to Poland 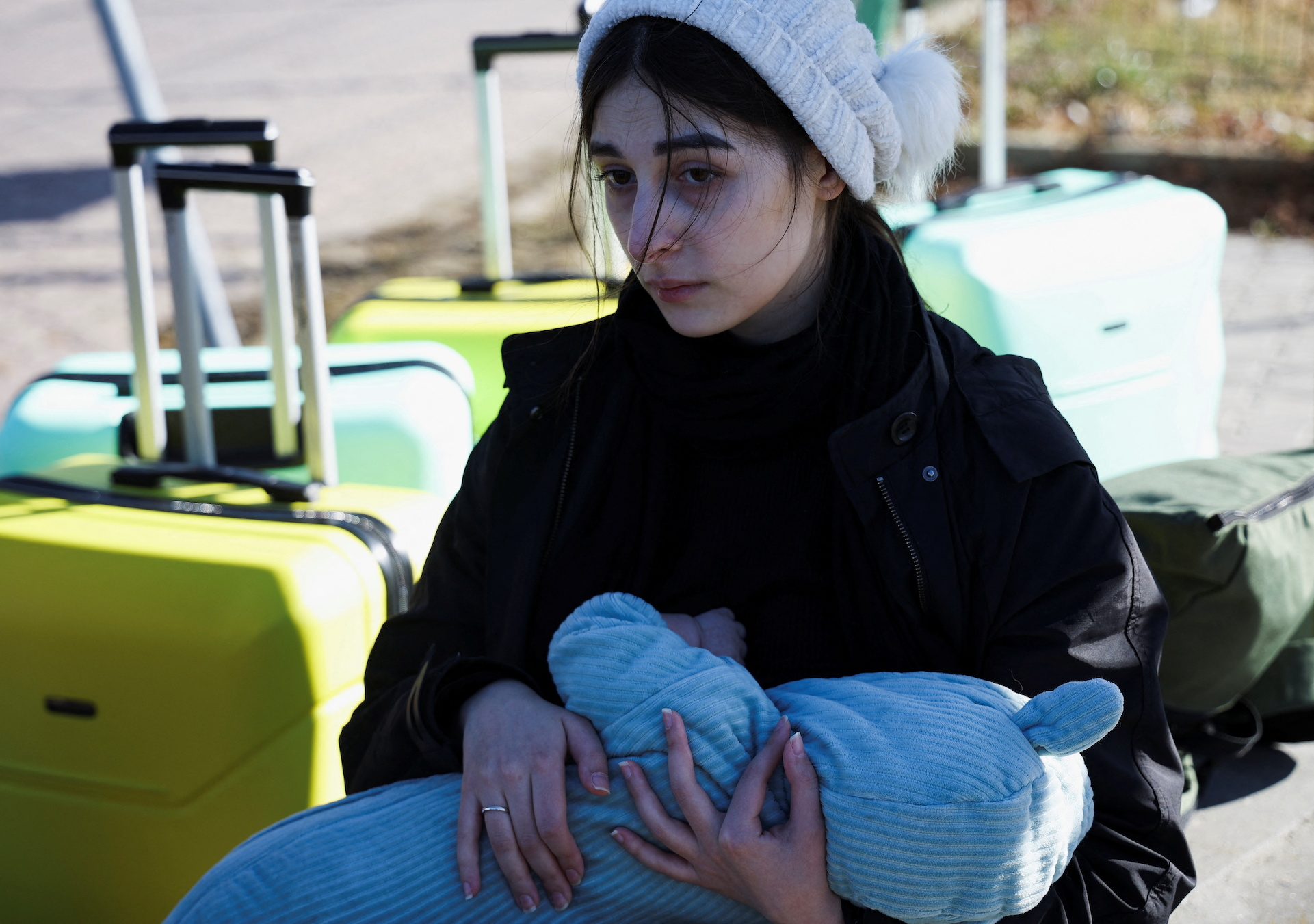 SEEKING REFUGE. A woman holds her child in her arms as she sits at the border crossing between Poland and Ukraine, after Russian President Vladimir Putin authorized a military operation in eastern Ukraine, in Medyka, Poland, on February 24, 2022.

Facebook Twitter Copy URL
Copied
Officials in European Union countries bordering Ukraine, including Romania and Slovakia, say there was no big influx of refugees for now, but local media and witnesses say foot traffic was increasing

MEDYKA, Poland – Ukrainians fleeing a Russian invasion have started trickling into Poland, with dozens arriving at the normally quiet Medyka crossing on Thursday, February 24, some carrying luggage and accompanied by children.

Officials in European Union countries bordering Ukraine, including Romania and Slovakia, said there was no big influx of refugees for now, but local media and witnesses said foot traffic was increasing.

Alexander Bazhanov fled his home in eastern Ukraine with his wife and young child, taking only what they could carry and walking the final part of their journey into Poland.

The 34-year-old technical manager from Mariupol, 113 km (70 miles) from Donetsk, decided to cross into Poland when he learned the war had started from a colleague.

“I don’t have any feelings other than that I am very scared,” Bazhanov said at the pedestrian border crossing, about 400 km from Warsaw. “I will visit my father in Spain but I don’t have any money and I don’t know how I will do that.”

Russian forces invaded Ukraine by land, air and sea on Thursday after President Vladimir Putin authorized what he called a special military operation in the east.

Central European nations that share a border with Ukraine have for weeks braced for an expected flood of refugees
searching for sanctuary within the European Union.

The Medyka crossing is largely used by people going shopping across the border or traveling for work.

Lines to enter the Polish border town grew during the morning. Some people said they feared Russia could push far into Ukraine.

“Everybody thought western Ukraine was safe because it was close to EU and NATO nations,” said Maria Palys, 44, who was traveling with her family and that of her brother. “It seems like it is not the right protection.”

Russia has demanded an end to NATO’s eastward expansion and Putin repeated his position that Ukrainian membership of the US-led military alliance would be unacceptable.

Putin said he had authorized military action after Russia had been left with no choice but to defend itself against what he said were threats from modern Ukraine, a democratic state of 44 million people.

News of the invasion spurred Olga Pavlusik and her boyfriend Bohdan Begey to rush to the border, leaving their dog at home in their town in western Ukraine. They have no destination in mind.

“Anywhere safe will be fine,” she told Reuters. – Rappler.com