A woman carries a cat as she and others arrive by buses from Nikolaev due to daily shelling, amid Russia's invasion of Ukraine, in Odesa, Ukraine, April 20, 2022. REUTERS/Igor Tkachenko

Facebook Twitter Copy URL
Copied
'Half a million of Ukrainian citizens were deported from Ukraine to the Russian Federation without agreement from their side,' says the head of the Ukrainian parliament's humanitarian committee

BRUSSELS, Belgium – Moscow has deported 500,000 people from Ukraine to Russia, a leading member of the parliament in Kyiv told European lawmakers on Wednesday, April 20, calling on the Red Cross to establish contact with those missing.

“Half a million of Ukrainian citizens were deported from Ukraine to the Russian Federation without agreement from their side,” said Mykyta Poturayev, the head of the Ukrainian parliament’s humanitarian committee.

Reuters could not independently verify the figure given by Poturayev, who did not give details or supporting evidence.

“Unfortunately there is no opportunity for now even (to make) contact with these people,” Poturayev told members of the European Parliament by video link.

Reuters has submitted a request for comment to the Russian Foreign Ministry.

Ukraine hopes to evacuate 6,000 women, children and elderly from Mariupol 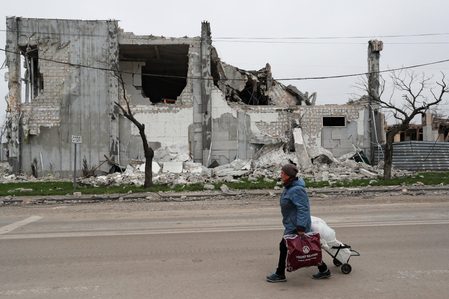 The 1949 Geneva Conventions, which define international legal standards for humanitarian treatment in conflict, prohibit mass forcible transfers of civilians during a conflict to the territory of the occupying power, classifying it as a war crime.

Moscow has denied intentionally targeting civilians since invading Ukraine on February 24 in what it calls a special military operation and says it is offering humanitarian aid to those wanting to leave.

A Russian government resolution on March 12 listed the whereabouts of 95,909 people across Russia who had left Ukraine, including the two breakaway regions Moscow has declared as independent entities.

A month later, the Russian military said it had rescued 138,014 civilians from Mariupol, as fighting intensified in the besieged city.

Poturayev said he was concerned about the fate of those Ukrainians he says were sent to Russia.

“We know about so-called filtration camps for Ukrainian citizens,” he said. “That’s one of the possible directions of Red Cross activity, at least to find these deported people and to understand what is going (on) with them on the territory of the Russian Federation.”

Alexandra Boivin, an official of the International Committee of the Red Cross, said her organization was talking to Russian authorities about possibilities to help these people.

“The question about whether we can confirm that people were forcibly displaced at this moment is one that I cannot answer… but it’s certainly an issue of concern,” she told the European Parliament’s debate. – Rappler.com