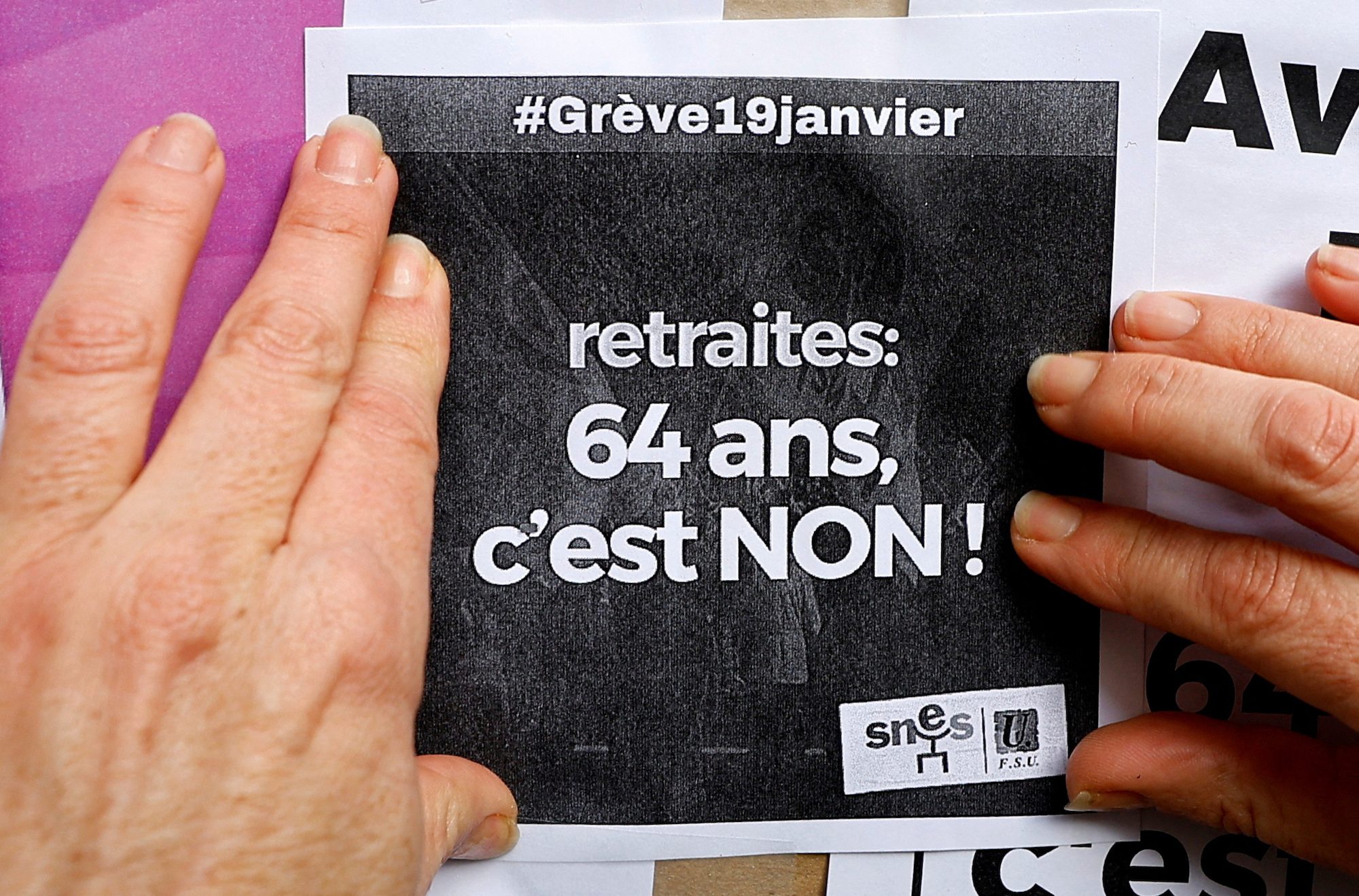 READY FOR PROTEST. A teacher sticks a slogan 'Pensions: No at age 64' on a placard in front of the high school Bristol in Cannes, ahead of a nationwide day of strike and protests in key sectors like energy, public transport, air travel and schools against pension reform in France, January 17, 2023.

Facebook Twitter Copy URL
Copied
The nationwide day of strikes and protests is not only a major test for President Emmanuel Macron, but also for the unions

PARIS, France – Trains will grind to a halt in France on Thursday, January 19, classrooms will be shut and businesses disrupted as workers walk off their jobs in an attempt to derail a planned pension reform that would see the retirement age pushed up by two years to 64.

The nationwide day of strikes and protests is not only a major test for President Emmanuel Macron, but also for the unions.

Opinion polls show French voters overwhelmingly reject a reform that the government says is vital to ensure the pension system does not go bust.

The challenge for unions, which are far less powerful in France than they used to be, is whether they can transform that opposition to the reform – and anger with a cost-of-living crisis – into a mass social protest that would last beyond Thursday and eventually get the government to back-track.

“Inflation, working conditions, pensions…(people) are fed up with all this and that’s why we think many will join us,” said Simone Legendre, a member of the CFE-CGC union that represents white-collar workers.

For Macron, what is at stake is his reformist credentials, both at home and with his European Union peers, as well as keeping public spending in check.

Pushing back the retirement age by two years and extending the pay-in period would yield an additional 17.7 billion euros ($19.1 billion) in annual pension contributions, allowing the system to break even by 2027, according to Labor Ministry estimates. Unions argue there are other ways to ensure the viability of the pension system.

Government spokesman Oliver Veran said the cabinet was “calm, determined” ahead of the strike and urged workers not to paralyse the country.

Unions have described the day as a starting point, with more strikes and protests to follow.

“What nobody can know, and even the unions don’t know is whether French people are cross enough to…block the country,” said Sciences Po professor Bruno Palier.

The reform still needs to go through parliament, where Macron has lost his absolute majority but is hoping to get it adopted with the support of conservatives.

Public transport will be severely disrupted on Thursday.

Only between one-in-three and one-in-five high-speed TGV lines will be operating, with barely any local or regional trains running, the SNCF rail operator said.

Some seven-out-of-10 primary school teachers have said they will strike, their main union said, while no refined oil products will be shipped from the TotalEnergies’ refinery in Dunkirk as refinery workers join the action.

“There’s nothing good in this reform,” said Rozenn Cros, in the southern French city of Cannes, as she and other teachers prepared for the strike, with banners including “No to 64.”

France’s hardline CGT union has threatened to cut off electricity supplies to lawmakers and billionaires, while the government said 10,000 police would be on the streets to try and make sure the protests do not turn violent.

Meanwhile, Macron and several of his ministers will be in Barcelona on Thursday for a meeting with the Spanish government. – Rappler.com