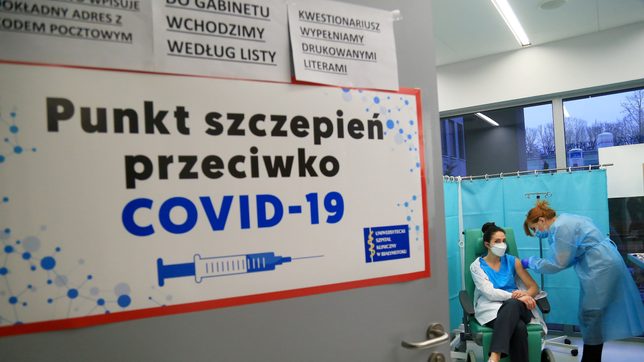 VACCINE IN POLAND. A paramedic administers a Pfizer-BioNTech COVID-19 vaccine to a woman at the University Hospital in Bialystok, Poland on January 4, 2021.

Poles rushed to sign up for COVID-19 vaccinations on Thursday morning, April 1, after the government unexpectedly opened registrations for people aged over 40 overnight, in a sudden shift that led to so many applications that an online system crashed.

Over 2 million Poles have so far received both shots of a vaccine, but the prime minister’s top aide, who has been put in charge of the vaccination program, said slower rates of registration among older Poles meant the government had decided to widen access.

“At the moment, we have registration open for all people over 60 years of age,” Michal Dworczyk told private radio station RMF FM.

“In the last two days, this registration for people over 60 years old has slowed down, so we decided to start the registration of people who reported their readiness to register in January,” he said.

He added that people aged 40 to 60 who had declared their readiness to be vaccinated had been sent referrals overnight.

Opposition lawmakers criticized the unexpected nature of the move.

“Dear ministry, such changes should be announced publicly at the time of launch! People shouldn’t find out about this from your reply on my Twitter,” tweeted left-wing lawmaker Adrian Zandberg.

Reuters reporters attempted to register after 0700 GMT for vaccinations, but the online system had stopped working.

Dworczyk said at a news conference that the registration of 40 to 59-year-olds would be suspended for a few hours to correct a technical glitch.

The nation of 38 million people is in the grip of a damaging third wave of the COVID-19 pandemic, which has pushed its health service to its limits, with some regions close to running out of ventilators. – Rappler.com