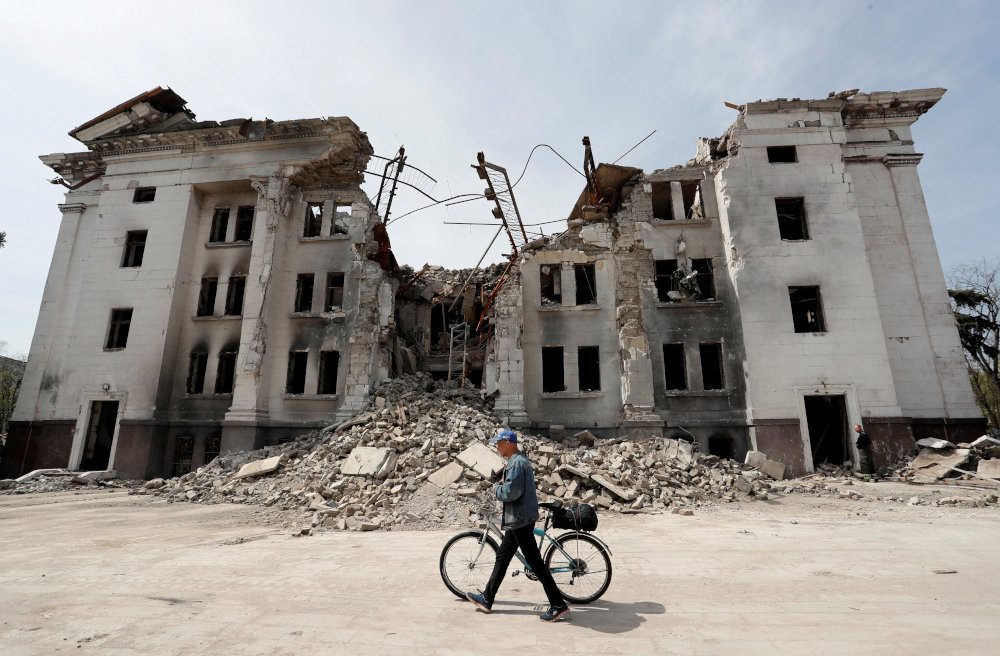 MARIUPOL'S DESTROYED THEATER. A view shows a theater building destroyed in the course of Ukraine-Russia conflict in the southern port city of Mariupol, Ukraine April 25, 2022.

The United States and its allies pledged new packages of ever heavier weapons for Ukraine during a meeting on Tuesday, April 26, at a German air base, brushing off a threat from Moscow that their support for Kyiv could lead to nuclear war.

US officials have switched emphasis this week from speaking mainly about helping Ukraine defend itself to bolder talk of a Ukrainian victory that would weaken Russia’s ability to threaten its neighbors.

Meanwhile, the powerful secretary of Russia’s Security Council said Western and Ukrainian government policy was leading to the breakup of Ukraine, and he accused Washington of seeking to instil in Ukrainians hatred for everything Russian.

NATO allies have lately approved shipments of hundreds of millions of dollars in arms, including artillery and drones they held back from sending in earlier phases of the war, and want their allies to do the same.

“Nations from around the world stand united in our resolve to support Ukraine in its fight against Russia’s imperial aggression,” Defense Secretary Lloyd Austin said, welcoming officials from more than 40 countries to Ramstein Air Base in Germany, headquarters of US air power in Europe. “Ukraine clearly believes that it can win, and so does everyone here.”

In a notable shift, Germany, where the government had come under pressure after refusing Ukrainian pleas for heavy weapons, announced it would now send “Gepard” light tanks with anti-aircraft guns.

“The real significance of this decision lies not in the difference Gepards may make on the battlefield, but in the
signal it sends,” said Marcel Dirsus, non-resident fellow at Kiel University’s Institute for Security Policy.

US officials, speaking on condition of anonymity, assess that Russia will rely heavily on artillery strikes to pound
Ukrainian positions while moving in ground forces from several directions to try to envelop and wipe out a significant chunk of Ukraine’s military.

But Washington also estimates that many Russian units are depleted, with some operating with personnel losses as high as 30% – a level considered by the US military to be too high to keep fighting indefinitely.

US officials cite anecdotes like Russian tanks with lone drivers and no crew, and substandard equipment that is either prone to breakdowns or out of date.

In a marked escalation of Russian rhetoric, Foreign Minister Sergei Lavrov was asked on state TV late on Monday about the prospect of World War Three and whether the current situation could be compared to the 1962 Cuban missile crisis that nearly caused nuclear war.

“The danger is serious, real. And we must not underestimate it,” Lavrov said, according to the ministry’s transcript of the interview. “NATO, in essence, is engaged in a war with Russia through a proxy and is arming that proxy. War means war.”

“It’s obviously unhelpful, not constructive, and certainly is not indicative of what a responsible (world power) ought to be doing in the public sphere,” Kirby said. “A nuclear war cannot be won and it shouldn’t be fought. There’s no reason for the current conflict in Ukraine to get to that level at all.”

Mark Milley, chairman of the US Joint Chiefs of Staff, told reporters while flying to Tuesday’s meeting that the next several weeks in Ukraine would be “very, very critical”.

“They need continued support in order to be successful on the battlefield. And that’s really the purpose of this
conference,” he said, describing the aim as coordinating aid that includes heavy weapons such as howitzer artillery.

The head of Russia’s Security Council, Nikolai Patrushev, told the government newspaper Rossiyskaya Gazeta that Ukraine could break into “several states”. His comments suggested the war could lead to a carve-up of the country for which Moscow would seek to pin the blame on its opponents.

UN Secretary-General Antonio Guterres, on a visit to Moscow, said he was ready to fully mobilize the organization’s resources to save lives and evacuate people from the besieged eastern Ukrainian city of Mariupol.

Ukrainian Deputy Prime Minister Iryna Vereshchuk said no humanitarian corridors were operating on Tuesday as there had been no break in the fighting in Ukraine.

To the west of Ukraine, there were fears unrest could spread to Moldova, where Russian troops have occupied a separatist region along the Ukrainian border, Transdniestria, since the 1990s. Two radio masts were destroyed by explosions early on Tuesday, following other blasts in Transdniestria on Monday.

The separatist authorities said they were raising their terrorism threat level to red, while the Kremlin said it was concerned. Russia’s TASS news agency quoted the separatist leader as saying the attacks could be traced back to Ukraine.

Moldova’s pro-Western President Maia Sandu blamed the “escalation attempts” on “factions from within the
Transdniestrian region who are pro-war forces and interested in destabilizing the situation in the region”.

Russia’s two-month-old invasion of Ukraine has left thousands dead or injured, reduced towns and cities to rubble,
and forced more than 5 million people to flee abroad.

Moscow calls its actions a “special operation” to disarm Ukraine and protect it from fascists. Ukraine and the West call this a false pretext for an unprovoked war to seize territory. – Rappler.com