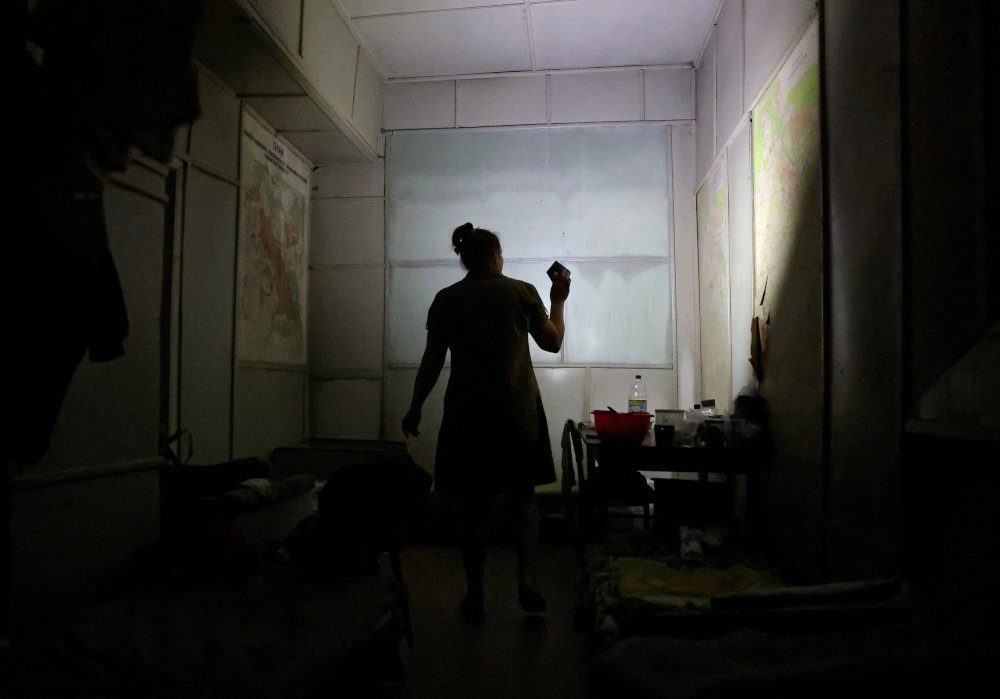 BOMB SHELTER. Local resident Tatiana Glushenko, 45, uses a flashlight inside a glass factory bomb shelter during the Ukraine-Russia conflict in the city of Lysychansk in the Luhansk Region, Ukraine on July 5, 2022.

Facebook Twitter Copy URL
Copied
(1st UPDATE) The Luhansk governor Serhiy Gaidai says, 'We are holding back the enemy on the (Luhansk/Donetsk) border'

Ukraine has so far thwarted an attempted Russian advance into the north of its Donetsk region, but the city of Sloviansk and other civilian areas there were being heavily shelled, Ukrainian officials said on Wednesday, July 6.

Russia has increased its focus on Donetsk, the southern part of which it and its proxies already control, after completing its seizure of the neighboring Luhansk region on Sunday with the capture of Lysychansk, much of which now lies in ruins.

Moscow says fully pushing the Ukrainian military out of both regions is central to what it calls its “special military operation” to ensure its own security, a now four-months-long offensive that the West calls an unprovoked war of aggression.

Donetsk and Luhansk comprise the Donbas, the eastern part of Ukraine that has witnessed the biggest battle in Europe for generations and which Russia wants to wrest control of for separatists it backs.

Ukrainian officials reported heavy fighting as Russian forces tried to push into Donetsk from Luhansk and towards Sloviansk.

“We are holding back the enemy on the (Luhansk/Donetsk) border,” Luhansk governor Serhiy Gaidai told Ukrainian television.

He said Russian regular and reserve forces had been sent there in an apparent effort to cross the Siverskiy Donets river and that two small settlements just inside Luhansk’s borders were the scene of fierce fighting.

“Luhansk region even now is fighting. Almost all the territory has been captured, but in two settlements fighting is ongoing,” he told a video briefing.

Gaidai and other Ukrainian officials have said Russian forces are pounding targets inside Donetsk with missile strikes.

Vadym Lyakh, the mayor of Sloviansk, told a video briefing the city had been shelled for the last two weeks.

“The situation is tense,” he said, speaking a day after local officials said Russian forces had struck a market and a residential area in Sloviansk and killed at least two people.

He said that, in all, 17 residents had been killed there since President Vladimir Putin ordered his troops into Ukraine
on February 24.

Russia’s defense ministry says it does not target civilians and on Wednesday said it was using high-precision weapons to take out military threats. It said it had destroyed two advanced US-made HIMARS rocket systems and their ammo depots in the Donetsk region, an assertion dismissed as false by Ukraine.

To the south, the port city of Mykolaiv was also being heavily shelled, Oleksandr Senkevych, its mayor, told a briefing. Russian forces were using multiple launch rocket systems to pound the city which had shed about half of its pre-war population of half a million, he said.

“There are no safe areas in Mykolaiv,” he said. “I am telling the people … that they need to leave.”

In Kramatorsk, a city in Donetsk which Russian forces are expected to try to take in coming weeks, Ukrainian soldiers and a handful of civilians ran errands in green-painted cars and vans on Wednesday. Much of the population has left.

He was unlikely to follow official advice to evacuate, he said, despite an uptick in missile strikes on the city. “I’m not looking for death but if I encounter it it’s better to be at home,” he said.

A group of artillerymen, who declined to give their names, were smoking outside a bar. They said it would make their lives easier if civilians evacuated front-line cities.

Kyiv and the West accuse Moscow and its allies of committing war crimes, something the Kremlin has denied.

Russia says it was forced to try to de-militarize Ukraine after the West ignored its pleas to guarantee that its westerly neighbor would not be admitted to NATO. It says it also had to root out what it said were dangerous nationalists and protect Russian speakers.

In a sign that Moscow is not preparing to wind down its operation anytime soon, Russia’s parliament on Wednesday rushed through two bills imposing strict controls on the economy, requiring businesses to supply goods to the armed forces and obliging employees at some firms to work overtime.

A Reuters reporter who visited Lysychansk on Tuesday, the last city in Luhansk to fall to the Russian advance, found many buildings scorched and holed by shells, cars up-ended and streets strewn with rubble.

Tatiana Glushenko, a 45-year-old resident, told Reuters there were people still sheltering in basements and bomb shelters, including children and elderly.

“All of Ukraine is being shelled… So we decided not to risk our lives and stay here, at home at least,” she said. – Rappler.com