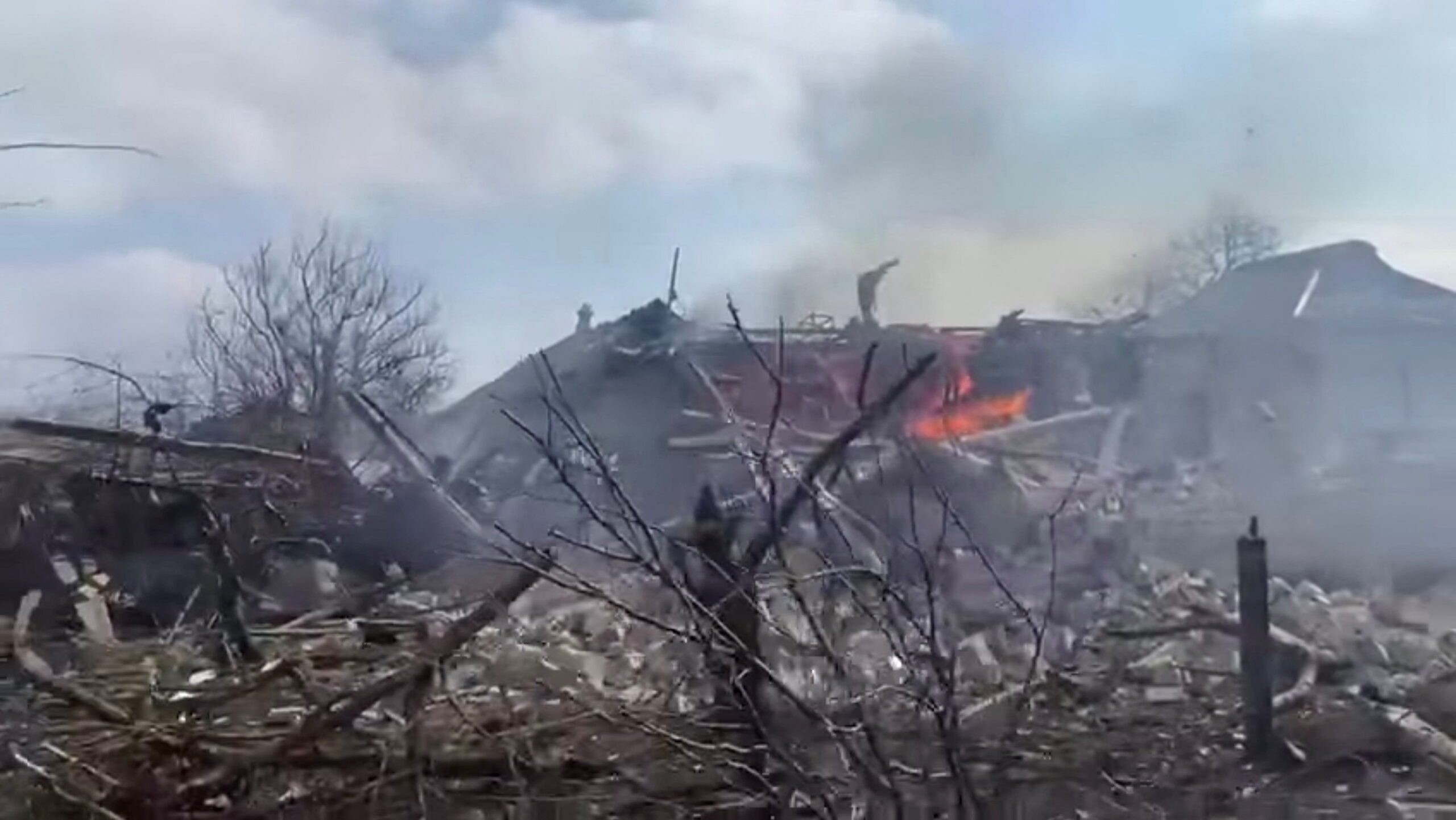 Armed Forces of Ukraine/Handout via REUTERS

Facebook Twitter Copy URL
Copied
(2nd UPDATE) 'Russia is likely seeking to reset and re-posture its forces for renewed offensive activity in the coming days,' says Britain's Ministry of Defense. 'This will probably include operations against the capital Kyiv.' 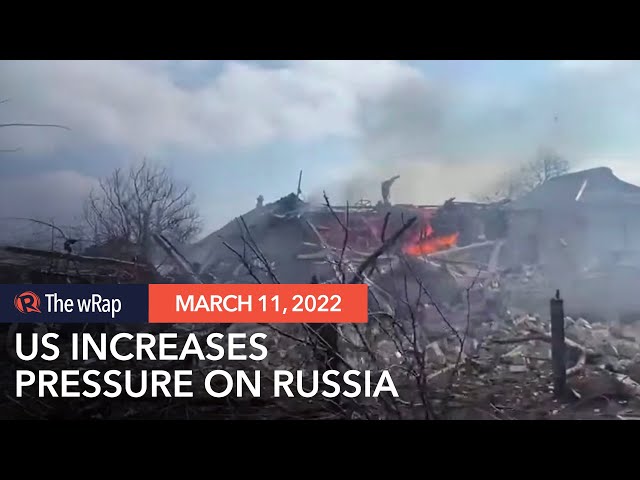 LVIV, Ukraine – Russian forces bearing down on Kyiv are regrouping northwest of the Ukrainian capital, satellite pictures showed, in what Britain said could be preparation for an assault on the city within days.

Kyiv accused Russian forces of bombing and shelling cities across Ukraine, and of hitting a psychiatric hospital near the eastern town of Izyum where hundreds of patients were sheltering in the basement.

In Russia, prosecutors asked a court to declare Meta Platforms, owner of Facebook and Instagram, an “extremist” organization, after it allowed posts in Russia and its western neighbors calling for the death of invading Russian troops.

Russia has been pounding Ukraine’s cities while its main attack force north of Kyiv has been stalled on roads since the invasion’s early days, having failed in what Western countries say was an initial plan for a lightning assault on the capital.

Images released by private US satellite firm Maxar showed armored units maneuvering in and through towns close to an airport on Kyiv’s northwest outskirts, site of fighting since Russia landed paratroopers there in the first hours of the war.

Other elements had repositioned near the settlement of Lubyanka just to the north, with towed artillery howitzers in firing positions, Maxar said.

“Russia is likely seeking to reset and re-posture its forces for renewed offensive activity in the coming days,” Britain’s Ministry of Defense said in an intelligence update. “This will probably include operations against the capital Kyiv.”

“It is impossible to say how many days we still have to free Ukrainian land. But we can say we will do it,” he said in a televised address.

In an overnight statement, the Ukrainian general staff said Russian forces were regrouping after taking heavy losses. Ukraine had pushed Russians back to “unfavorable positions” in the Polyskiy district, near the Belarus border to the rear of the main Russian column heading towards Kyiv, it said.

Emergency services said no one had been hurt in the psychiatric hospital struck in eastern Ukraine, as the patients were already sheltering in the basement.

Oleh Synegubov, governor of the Kharkiv region, said 330 people had been in the building and called the attack a war crime. Reuters could not immediately verify the report and there was no immediate comment from Moscow.

It came less than two days after Russia bombed a maternity hospital in the besieged southern port of Mariupol. Ukraine said pregnant women were among those hurt; Russia said the hospital was no longer functioning and had been occupied by Ukrainian fighters.

For a seventh straight day, Russia announced plans to cease fire to let civilians leave Mariupol, where hundreds of thousands of people trapped with no food, water, heat or power. All previous attempts to reach the city have failed with both sides accusing each other of failing to observe ceasefires.

Ukraine said it would try yet again to help people leave. “We hope it will work today,” Deputy Prime Minister Iryna Vereshchuk said.

Moscow denies it has been targeting civilians in what it calls a “special operation” to disarm and “de-Nazify” Ukraine. (LIVE UPDATES: Russia-Ukraine crisis)

President Vladimir Putin has tried to project an air of calm since ordering the invasion on February 24. At a meeting with Belarus leader Alexander Lukashenko on Friday, Putin said there were “certain positive shifts” in talks with Ukrainians, though he did not elaborate.

Earlier Putin was shown on TV approving a proposal to recruit 16,000 fighters from the Middle East.

The Russian state prosecutor’s office said it had asked a court to designate Facebook’s owner “extremist”, and the investigative committee said it had opened a criminal case “in connection with illegal calls for murder and violence against citizens of the Russian Federation” by Meta employees. Meta did not immediately respond to a request for comment.

A Meta spokesperson had said on Thursday it had temporarily eased rules to allow posts such as “death to the Russian invaders”, though not calls for violence against Russian civilians. Reuters reported that internal emails sent to content moderators showed posts had been allowed calling for the death of Putin or Lukashenko.

“We hope it is not true because if it is true then it will mean that there will have to be the most decisive measures to
end the activities of this company,” said Kremlin spokesperson Dmitry Peskov.

European Union leaders meeting in France’s Versailles Palace agreed to spend more on defense and cut reliance on Russian energy supplies by 2027. They did not manage to agree on all details, or on how far to push with more sanctions against Russia.

The leaders said Ukraine belonged to their family but declined its call for a speedy admission to the EU, wary of angering Moscow and of letting in a country that does not meet the bloc’s criteria.

In the two weeks since the invasion, Western countries have swiftly moved to isolate Russia from the global financial system to an extent never before visited on such a large economy.

In the latest move, US President Joe Biden is expected to seek to strip Russia of normal rights under global trading rules, known as “most-favored nation” status.

While Russia’s advance on Kyiv has been stalled, and it has failed so far to capture any cities in northern or eastern Ukraine, it has made more substantial progress in the south. Moscow said on Friday its separatist allies in the southeast had captured the town of Volnovakha north of Mariupol.

Residents of Ukrainian cities have packed into underground metro stations for shelter. Nastya, a young girl lying on a makeshift bed on the floor of a metro train carriage in Kharkiv, said she had been there for more than a week, unable to move around much and ill with a virus that had being going around.

Three air strikes near a kindergarten in the central city of Dnipro killed at least one person on Friday, state emergency services said.

The mayor of the city of Lutsk said four people had been killed and six wounded in an attack on an airfield, a rare strike on a target deep in western Ukraine – far from the battlefields in the north, east and south. – Rappler.com