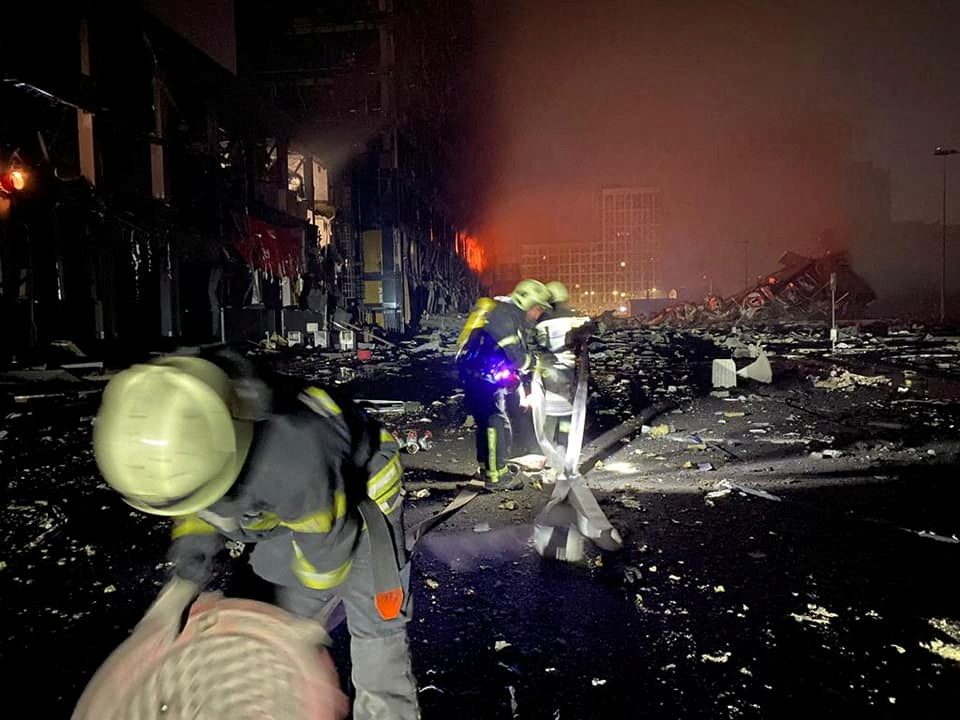 SHOPPING MALL STRUCK. Rescuers work at a site of a shopping mall damaged by an airstrike, as Russia's attack on Ukraine continues, in Kyiv, Ukraine, in this handout picture released March 21, 2022.

LVIV, Ukraine – Russian forces advancing on the Ukraine capital Kyiv from the northeast have stalled, British intelligence said on Monday, March 21, as Ukraine rejected Russian calls for defenders to lay down their arms in the besieged city of Mariupol.

Russian shells hit houses and a shopping district in Kyiv’s Podil district late on Sunday killing at least four people, city authorities said, following a relative lull in the fighting over the weekend.

“There can be no question of any surrender, laying down of arms,” said Deputy Prime Minister Iryna Vereshchuk in response to Moscow’s offer to let Mariupol residents leave the city if they surrender their weapons.

“We have already informed the Russian side about this,” said Vereshchuk, according to the Ukrainska Pravda news portal.

The assault on Ukraine started with Russian troops crossing the border or landing by sea and air on February 24. But Western countries say Russia’s expectations of a swift victory and the removal of President Volodymyr Zelenskiy’s government have been dashed and its invasion force has got bogged down.

Ukraine and its Western backers say Russian ground forces have made few advances in the past week, concentrating their efforts on artillery and missile strikes – often into urban centres.

The bulk of Russian forces remain more than 25 kilometers (15 miles) from the center of Kyiv, British military intelligence said.

“Heavy fighting continues north of Kyiv,” the Ministry of Defense said. “Forces advancing from the direction of Hostomel to the northwest have been repulsed by fierce Ukrainian resistance.”

Russian President Vladamir Putin says the biggest attack on a European state since World War Two is “a special military operation” to stop the Ukrainian government from committing “genocide” – an accusation the West calls a baseless fabrication.

The humanitarian crisis in the port city of Mariupol, where residents are besieged with little food, water and power, is increasing pressure on European leaders to toughen sanctions on Moscow.

Russian offered to open humanitarian corridors from the city from 10 am Moscow time (0700 GMT; 3:00 pm Philippine time) on Monday if residents lay down arms. Russia and Ukraine have made agreements throughout the war on exit corridors but accuse each other of violations.

Mariupol has suffered some of the heaviest bombardments since Russia invaded. Many of its 400,000 residents remain trapped as the fighting rages.

Vereshchuk said more than 7,000 people were evacuated from Ukrainian cities through humanitarian corridors on Sunday, more than half from Mariupol. She said the government planned to send nearly 50 buses there on Monday for more evacuations.

European Union leaders this week will meet to consider imposing tougher sanctions on Russia including an oil embargo.

EU ministers will take up the discussion on Monday before U.S. President Joe Biden arrives in Brussels on Thursday for summits with NATO’s 30 members, as well as the EU and in a Group of Seven (G7) format including Japan.

In his latest appeal for help from abroad, Ukrainian President Volodymyr Zelenskiy addressed the Israeli parliament by video link on Sunday and questioned Israel’s reluctance to sell its Iron Dome missile defense system to Ukraine.

“Everybody knows that your missile defence systems are the best… and that you can definitely help our people, save the lives of Ukrainians, of Ukrainian Jews,” said Zelenskiy, who is of Jewish heritage.

Zelenskiy also welcomed the mediation efforts of Israeli Prime Minister Naftali Bennett, who has held numerous calls with him and Putin.

“Sooner or later we will begin to have talks with Russia, possibly in Jerusalem,” he said in his daily video address to Ukrainians.

Negotiators reported some progress last week on a political formula that would guarantee Ukraine’s security, while keeping it outside NATO – a key Russian demand – though each side accused the other of dragging things out.

Mariupol’s council said on Telegram that several thousand residents had been “deported” to Russia over the past week. Russian news agencies said buses had carried hundreds of refugees from Mariupol to Russia in recent days.

US ambassador to the United Nations Linda Thomas-Greenfield told CNN the deportation accounts were “disturbing” and “unconscionable” if true but Washington had not confirmed them.

Greece’s consul general in Mariupol, the last EU diplomat to leave the city, said it was joining the ranks of places known for having been destroyed in wars.

Capturing Mariupol would help Russian forces secure a land corridor to the Crimea peninsula that Moscow annexed from Ukraine in 2014.

The UN human rights office said at least 902 civilians had been killed as of Saturday, though the real toll was probably much higher.

About 10 million Ukrainians had been displaced, including some 3.4 million who have fled to neighbouring countries, the UN refugee agency said.

In the southern city of Kherson, video seen by Reuters showed dozens of protesters, some wrapped in Ukraine’s blue-and-yellow flag, chanting “Go home” in Russian at two military vehicles with Russian markings. The vehicles withdrew.

“I want the war to be over, I want them to leave Ukraine in peace,” said Margarita Morozova, 87, who survived Nazi Germany’s siege of Leningrad in World War Two and has lived in Kharkiv, eastern Ukraine, for the past 60 years. – Rappler.com