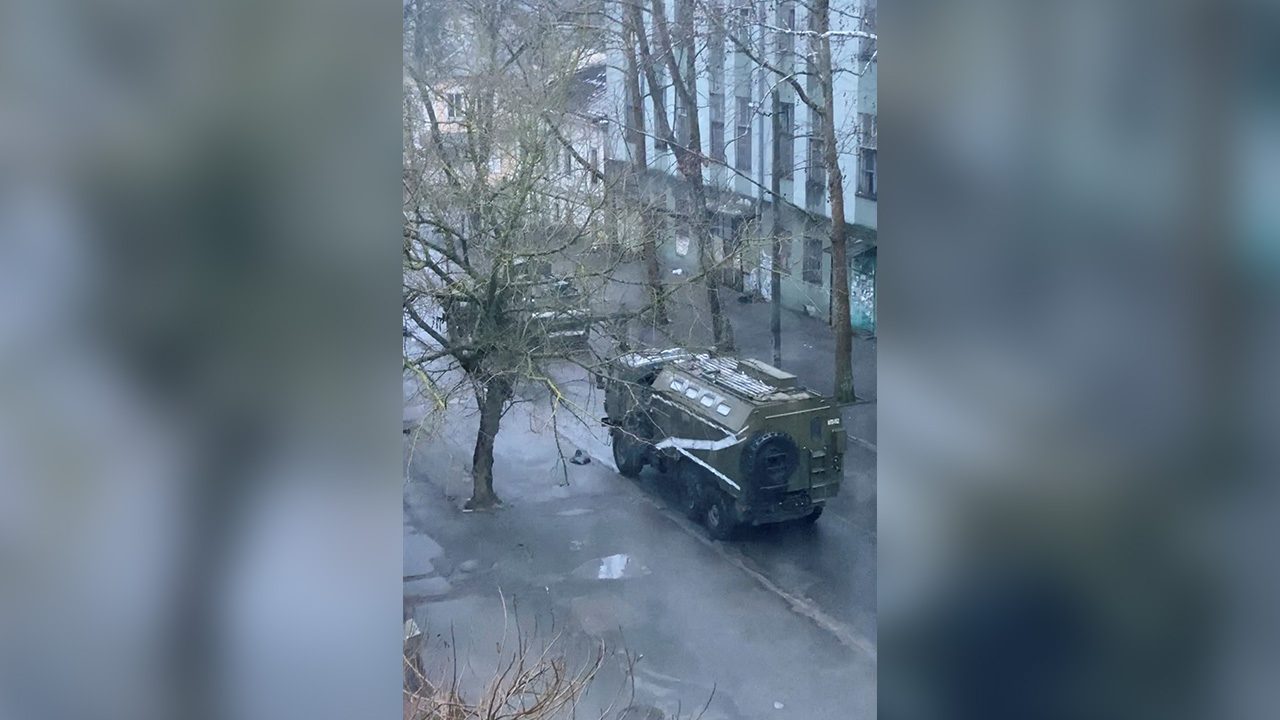 IN KHERSON. A military truck and tank are seen on a street of Kherson, Ukraine March 1, 2022, in this screen grab from a video obtained by Reuters on March 2, 2022.

Russian troops were in the center of the Ukrainian port of Kherson on Thursday, March 3, after a day of conflicting claims over whether Moscow had captured a major urban center for the first time in its eight-day invasion.

Russia’s defense ministry said it controlled Kherson on Wednesday, March 2, but an adviser to Ukrainian President Volodymyr Zelenskiy responded that Ukrainian forces continued to defend the Black Sea port of about 250,000 people.

“We are a people who broke the enemy’s plans in a week,” Zelenskiy said in a video address. “These plans had taken years to write – they are mean, with hatred for our country, for our people.”

A Ukrainian delegation had left for a second round of talks with Russian officials on a ceasefire, Ukrainian presidential adviser Mykhailo Podolyak told Reuters.

Russian forces have yet to overthrow the government in Kyiv but thousands are reported to have died or been injured and more than a million people have fled Ukraine amid the biggest attack on a European state since 1945.

At Borodyanka, a town 58 km (36 miles) northwest of Kyiv, a resident gave a breathless account of their encounter with the enemy, as Reuters Television footage showed shell damaged building, fires burning in the streets and destroyed military vehicles.

“They (Russian military) started shooting from their BMP (military vehicle), towards the park in front of the post office in the center of Borodyanka,” said a Ukrainian man, who did not give his name.

“Then those bastards started the tank and started shooting into the Fora (supermarket) which was already burned. It caught fire again.” 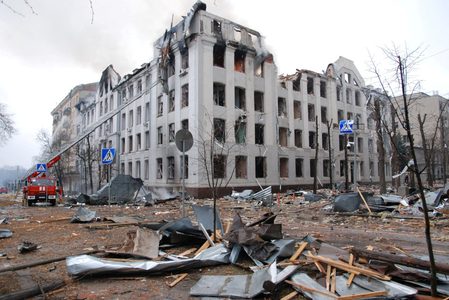 The capture of Kherson, a strategic southern provincial capital where the Dnipro River flows into the Black Sea, would be the first significant urban center to fall since Moscow launched its invasion on February 24.

Mayor Igor Kolykhayev said late on Wednesday that Russian troops were in the streets and had entered the council building. He called on civilians to walk through the streets only in daylight and in ones and twos.

“There were armed visitors in the city executive committee today,” he said in a statement. “I didn’t make any promises to them … I just asked them not to shoot people.”

Russia’s attack has led to a barrage of international sanctions that threaten the global economic recovery from the COVID pandemic, and stoked fears of wider conflict as Western countries send arms to help the Ukrainian military.

The US State Department called on Putin and the Russian government to “immediately cease this bloodshed” and withdraw forces from Ukraine. It also accused Moscow of launching a “full war on media freedom and the truth” by blocking independent news outlets and social media to prevent Russians from hearing news of the invasion of Ukraine.

Russia calls its actions in Ukraine a “special operation” that is not designed to occupy territory but to destroy its neighbor’s military capabilities and capture what it regards as dangerous nationalists.

It denies targeting civilians although there have been widespread reports of civilian casualties and the shelling of residential areas.

Bombing in Kharkiv, a city of 1.5 million people, has left its center a wasteland of ruined buildings and debris.

Russians have shelled the city of Izyum, about 120 km (75 miles) southeast of Kharkiv, killing six adults and two children, Ukraine’s parliament said. Reuters was unable to verify the casualties.

The UN Human Rights Office has confirmed the deaths of 227 civilians and 525 injuries during the conflict as of midnight on March 1, cautioning that the real toll would be much higher due to reporting delays.

An explosion also rocked the Kyiv railway station where thousands of women and children were being evacuated. The blast was caused by wreckage from a downed Russian cruise missile, a Ukrainian interior ministry adviser said, and there were no immediate reports of casualties.

An investigation into possible war crimes will immediately be opened by the International Criminal Court, following requests by 39 of the court’s member states, an unprecedented number.

A UN reprimanding Moscow was supported by 141 of the assembly’s 193 members, a symbolic victory for Ukraine that increases Moscow’s international isolation.

“More is at stake even than the conflict in Ukraine itself. This is a threat to the security of Europe and the entire rules-based order,” US Secretary of State Antony Blinken said.

Russian Foreign Minister Sergei Lavrov said Moscow still sought Ukraine’s “demilitarization” and that there should be a list of specified weapons that could never be deployed on Ukrainian territory. Moscow opposes Kyiv’s bid to join NATO.

Oil and commodity prices spiraled ever higher on Thursday in a grim omen for global inflation.

For Russians, the fallout has included queues outside banks, a plunge in the value of the rouble which threatens their living standards, and an exodus of Western firms who refuse to do business in the country.

Japanese automakers including Toyota were forced to halt production in Russia as sanctions scrambled logistics and cut off supply chains.

Forbes reported Germany had seized Russian billionaire Alisher Usmanov’s mega yacht in a Hamburg shipyard, while at least five superyachts owned by billionaires were anchored or cruising in Maldives, an Indian Ocean island nation that does not have an extradition treaty with the United States, data showed.