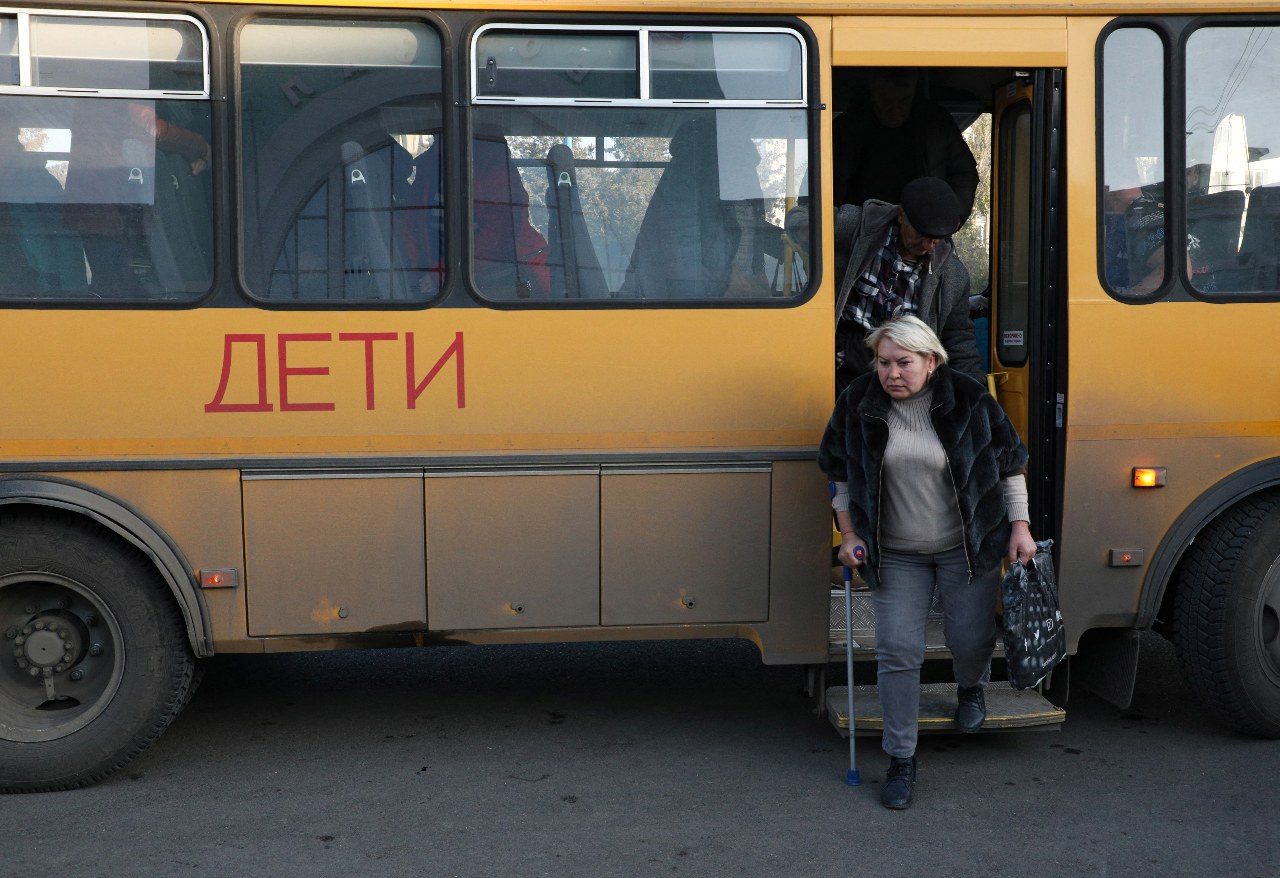 EVACUATION. Civilians evacuated from the Russian-controlled Kherson region of Ukraine get off a bus as they arrive at a local railway station, after Russian-installed officials extended an evacuation order to the area along the eastern bank of the Dnipro River, in the town of Dzhankoi, Crimea, on November 2, 2022. The sign on a bus reads 'children.'

KYIV, Ukraine – Russian forces are likely to abandon their foothold on the west bank of Ukraine’s Dnipro River, a Russian-installed occupation official said on Thursday, November 3, signaling a massive Russian retreat that, if confirmed, would be a major turning point in the war.

Ukrainian officials remained cautious about signs that Russia was abandoning the area, and there was silence from higher-ups in Moscow over the announcement of what would amount to one of Russia’s most humiliating retreats since the invasion.

“Most likely our units, our soldiers, will leave for the left (eastern) bank,” Kirill Stremousov, the Russian-installed deputy civilian administrator of the Kherson region, said in an interview with Solovyov Live, a pro-Kremlin online media outlet. (LIVE UPDATES: Russia-Ukraine crisis)

The area includes Kherson city, capital of the region of the same name, and the only major city Russia had captured intact since its invasion in February. It also includes one side of a huge dam across the Dnipro which controls the water supply to irrigate Crimea, the peninsula Russia has occupied since 2014.

Previously, Russia had staunchly denied that its forces were planning to withdraw from the area, which President Vladimir Putin claimed to have annexed to Russia at the end of September.

Speculation swirled on Thursday over whether Russia was indeed pulling out, after photos circulated on the internet showing the main administrative building in Kherson city with Russia’s flag no longer flying atop it.

Russia has fought for months to hang on to the pocket of land it holds on the west bank at the mouth of the river that bisects Ukraine. Moscow had sent tens of thousands of troops to reinforce the area, one of its biggest battlefield priorities.

Ukraine has targeted the main river crossings for months, making it difficult for Russia to supply its huge force on the west bank. Ukrainian troops have been advancing along the river since bursting through the Russian frontline there at the start of October, although their advance had slowed in recent days.

Russia had ordered civilians to evacuate from occupied areas on the west bank, and this week also ordered them out of a 15 km buffer zone on the east bank as well. Kyiv says those evacuation orders amount to forced deportation, a war crime.

Stremousov urged civilians remaining in Kherson city to leave immediately, saying they were putting their lives in danger.

Ukraine maintains tight secrecy about the progress of its troops at the front in Kherson but has so far been publicly cautious about any suggestions that Russia is vacating positions there. Ukrainian troops on the front line last week, visited by Reuters, said they saw no evidence Russian forces were withdrawing and believed they were in fact reinforcing.

Natalia Humenyuk, head of the press center for the Ukrainian military, said the removal of the Russian flag from atop the administration building in Kherson could be a Russian trap to lure Ukrainian troops into a reckless advance.

“This could be a manifestation of a particular provocation, in order to create the impression that the settlements are abandoned, that it is safe to enter them, while they are preparing for street battles,” she said in televised comments.

Moscow declared at the end of September that it had annexed Ukraine’s Kherson, Donetsk, Luhansk, and Zaporizhzia regions after staging so-called referendums rejected as bogus and illegal by Kyiv and the West. – Rappler.com