POWER PLANT FIRE. Firefighters work to put out a fire in an energy infrastructure facilities, damaged by a Russian missile strike, as Russia's attack on Ukraine continues, in Zhytomyr, Ukraine, October 18, 2022.

Facebook Twitter Copy URL
Copied
(2nd UPDATE) Under the new energy-saving regime, power supply across Ukraine is restricted between 7 am and 11 pm

KYIV, Ukraine – Ukrainians conserved electricity and some went without running water on Thursday, October 20, to ease pressure on the grid and allow the repair of infrastructure destroyed by Russian air strikes as Kyiv’s forces advanced towards the city of Kherson.

Although Ukraine is successfully prosecuting counter-offensives against Russian forces in the east and the south, it is struggling to protect power generating facilities and other utilities from Russian missile and drone strikes which appear designed to disrupt and demoralize as winter approaches.

People across Ukraine tried to use less power on Thursday after the government placed restrictions on electricity usage nationwide for the first time since Russia’s February 24 invasion following a barrage of attacks which President Volodymr Zelenskiy said had struck a third of all power plants.

Under the new energy-saving regime, power supply across Ukraine was on Thursday restricted between 7 am and 11 pm.

“Russians have invaded our country, there is much anger against Russian leaders and Russian people,” Mikhaylo Holovnenko, a Kyiv resident, told Reuters.

“But we are ready for outages. We have candles, charged power banks. Ukraine is charged to win.”

Some grocery stories in Kyiv said they had noticed people starting to buy more 5 liter bottles of mineral water to prepare for possible water shortages.

“Scorched earth tactics will not help Russia win the war. They will only strengthen the unity and resolve of Ukraine and its partners,” Scholz told the German parliament.

Dmitry Medvedev, deputy head of Russia’s Security Council, said Scholz was the last person who should be making such accusations.

“The German chancellor has clearly forgotten the Nazi past of his country and the 30 million Soviet people who were killed or died of hunger and cold during the war,” Medvedev said.

Russia’s defense ministry confirmed it was again targeting Ukrainian energy infrastructure, a strategy it has stepped up since the appointment this month of Sergei Surovikin – nicknamed “General Armageddon” by the Russian media because of his alleged toughness – as commander of what Moscow called its “special military operation” in Ukraine.

Reuters journalists said five drones hit the southern port city of Mykolaiv on Thursday, but it was unclear where they had exploded.

Herman Halushchenko, the energy minister, told Ukrainian TV that Russia had carried out more than 300 air strikes on Ukrainian energy facilities since October 10.

He said the government was seeking a 20% reduction in energy use as a result.

“We see a voluntary decrease (in electricity consumption). But when it is not enough, we are forced to bring in forced shutdowns,” he said.

Cities such as the capital Kyiv and Kharkiv announced curbs on the use of electric-powered public transport such as trolleybuses and reduced the frequency of trains on the metro.

The whole northeast region of Sumy, which borders Russia, said it would go the entire day – from 0700 to 2300 local time – without water, electric transport or street lighting.

Russian martial law in parts of Ukraine – what will it mean? 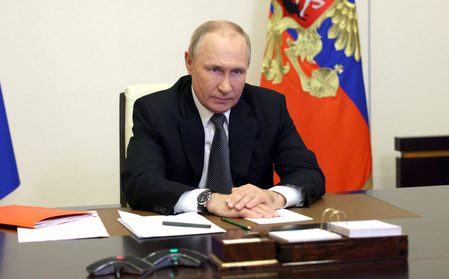 Zelenskiy explained in a Wednesday night, October 19, video address that the power problems would take time to resolve.

“We assume that Russian terror will be directed at energy facilities until, with the help of partners, we are able to shoot down 100% of enemy missiles and drones.”

Zelenskiy was due to address an EU summit later on Thursday. Leaders of the 27 member states will discuss options for more support to Ukraine, including energy equipment, helping restore power supply and long-term financing to rebuild.

Much of the destruction has been inflicted by Russian drones, which Ukraine and the West say are Iranian-made, something Tehran denies.

British Defense Minister Ben Wallace said Iran was supplying Moscow with the drones despite its denials. Britain was expected to make an announcement on possible sanctions later on Thursday.

European Union members had agreed on new measures against Iran over its supply of drones to Russia, the bloc’s Czech presidency said.

On the ground, the Ukrainian military continued to try to press its advance towards the southern city of Kherson, the only regional capital Russian forces have captured since their invasion eight months ago.

The Russian-appointed administration on Wednesday told civilians to leave the city – control of which gives Russia a land route to Crimea, which it seized in 2014, and the mouth of the Dnipro river.

On Wednesday, Kirill Stremousov, deputy head of the Russia-backed administration in Kherson, wrote on Telegram that Ukraine had opened an offensive towards Novaya Kamianka and Berislav in the Kherson region.

While Ukraine remained tight-lipped about its operations, its military said in an early Thursday update on the Kherson region said 43 Russian servicemen had been killed and six tanks and other equipment destroyed.

The Russian defense ministry described a battle in the area which it said its forces had won.

“In the area of the settlement of Sukhanovo, Kherson region, the enemy managed to drive a wedge into Russian units’ defensive lines,” the ministry said on Thursday.

“Due to the introduction of a tank reserve by the Russian command into battle, as well as ambush actions, the enemy was significantly defeated, and Ukrainian units fled.”

Reuters was not able to verify battlefield reports. – Rappler.com