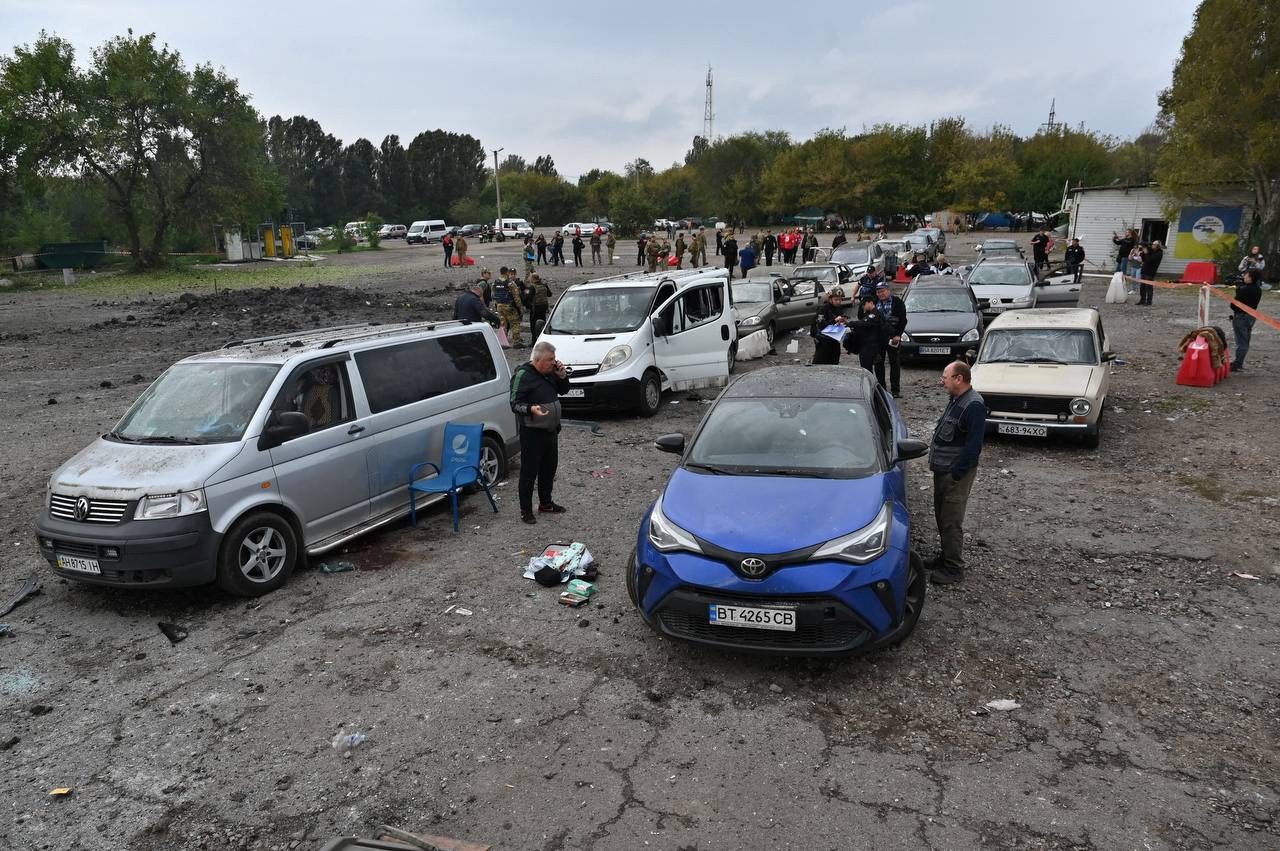 Cars destroyed by a Russian missile strike, that hit a convoy of civilian vehicles amid Russia's attack on Ukraine, are seen in Zaporizhzhia, Ukraine September 30, 2022. REUTERS/Stringer

ZAPORIZHZHIA, Ukraine – A defiant Vladimir Putin proclaimed Russia’s annexation, of a swathe of Ukraine in a pomp-filled Kremlin ceremony, promising Moscow would triumph in its “special military operation” against Kyiv even as some of his troops faced potential defeat.

The Russian president’s proclamation of Russian rule over 15% of Ukraine – the biggest annexation in Europe since World War Two – has been firmly rejected by Western countries and even many of Russia’s close allies.

It comes as Russian forces in one of the four regions being annexed face being encircled by Ukrainian troops after Putin ordered a massive mobilization drive to get hundreds of thousands of Russian men to the front.

In one of the toughest anti-American speeches he has delivered in more than two decades in power, Putin signaled he was ready to continue a battle for a “greater historical Russia” using whatever tools he had at his disposal and slammed the West as neo-colonial and satanist.

“Truth is on our side. Russia is with us!” Putin told his country’s political elite, who had gathered in one of the Kremlin’s grandest halls to watch what him sign documents annexing four Ukrainian regions.

He said the United States had set a precedent when it had dropped two atomic bombs on Japan in 1945, but stopped short of issuing new nuclear warnings against Ukraine himself, something he has done more than once in recent weeks.

The ceremony culminated in the 69-year-old leader chanting “Russia Russia!” as he clasped the hands of the four Russian-backed officials he wants to run the annexed regions which Ukraine is fighting to win back.

Putin said Russia and the four regions would defeat Ukraine together.

“People living in Luhansk, Donetsk, Kherson region and Zaporizhzhia region are becoming our compatriots forever,” said Putin, referring to the four Ukrainian regions which he said Russia was annexing.

“We will defend our land with all our strength and all our means,” he said, calling on “the Kyiv regime to immediately cease hostilities and return to the negotiation table”.

Ukrainian President Volodymr Zelenskiy, speaking in Kyiv after Putin, said he was ready for peace talks if and when Russia got a new president and announced that Ukraine was formally applying for fast-track membership of the NATO military alliance, something Moscow fiercely opposes.

Zelenskiy and the West have condemned referendums that Moscow held in the four Ukrainian regions – and said showed big majorities to join Russia – as illegal shams, while several dozen Ukrainians interviewed by Reuters in the last week said that only people they described as “Russian collaborators” had voted, with most people boycotting them.

US President Joe Biden condemned what he called Russia’s “fraudulent attempt” to annex sovereign Ukrainian territory, which he said was a flagrant violation of international law and said new US sanctions would hurt those who provided political or economic support to the annexation drive.

In Ukraine’s Donetsk region, Russia’s garrison in the town of Lyman was in serious trouble on Friday with reports from both sides saying Russian forces were nearly surrounded.

The encirclement could leave Ukrainian forces an open path to seize more territory in Luhansk and Donetsk provinces, captured earlier in some of the war’s bitterest fighting.

The pro-Russian leader in Donetsk acknowledged troops had lost full control of Yampil and Dobryshev, villages north and east of the city of Lyman, leaving Moscow’s garrison “half-encircled”.

The Ukrainian army was “trying at all costs to spoil our historic events”, Denis Pushilin said. “This is very unpleasant news, but we must look soberly at the situation and draw conclusions from our mistakes.”

Ukraine’s military said it was withholding details of the situation on the battlefield until the area was stabilized, but that an operation was under way to encircle Russian forces.

The war’s brutality was further hammered home just hours before Putin’s speech when missiles struck a convoy of civilian cars preparing to cross the frontline from Ukrainian-held territory in Zaporozhzhia province.

Reuters saw a dozen bodies amid blasted cars in a scene of carnage. Ukraine said 25 people had been killed and 74 wounded.

Ukrainian officials called it a deliberate Russian attempt to sever the last links across the front. Moscow blamed the Ukrainians.

The convoy was assembling at a car park near Zaporizhzhia, the Ukrainian-held capital of one of the regions Moscow says it is annexing. One checkpoint in the area has been open in recent days allowing civilians to cross the frontline.

A crater had been gouged in the ground. The impact had thrown chunks of dirt into the air and sprayed shrapnel across cars packed with belongings, blankets and suitcase. Reuters saw around a dozen bodies.

Plastic sheets were draped over the bodies of a woman and young man in a green car. Two bodies lay in a white mini-van in front of another car, its windows blown out and the sides pitted with shrapnel. The corpse of an elderly woman lay nearby, next to her shopping bag.

A woman who gave her name as Nataliya said she and her husband had visited their children in Zaporizhzhia and were preparing to cross back into Russian-held territory.

“We were returning to my mother who is 90 years old. We have been spared. It’s a miracle,” she said, standing with her husband beside their car.

Pro-Russian officials said, without evidence, that Ukraine was to blame for the attack. Russia has always denied its forces target civilians, despite countless confirmed incidents documented by the United Nations and other bodies. – Rappler.com