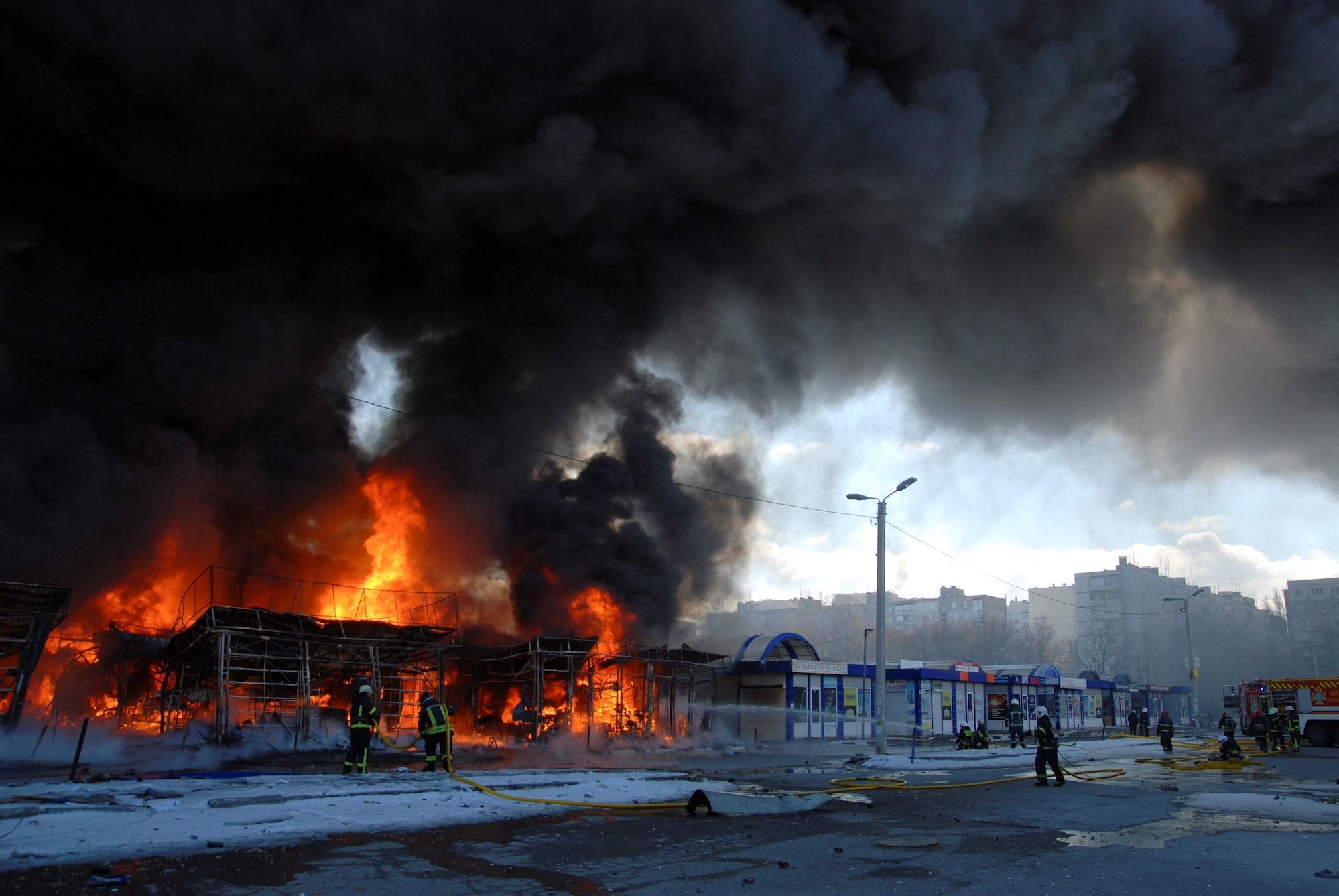 Firefighters work at a site of a fire, as Russia's invasion of Ukraine continues, in Kharkiv, Ukraine March 16, 2022.

New talk of compromise from both Moscow and Kyiv on a status for Ukraine outside of NATO lifted hope on Wednesday for a potential breakthrough after three weeks of war.

The Kremlin said the sides were discussing status for Ukraine similar to that of Austria or Sweden, both members of the European Union that are outside the NATO military alliance.

Though the war still ground on with Ukrainian civilians trapped in cities under Russian bombardment, the signs of compromise sent relief through global financial markets. Shares in Germany – Russia’s biggest energy market – were up 3.4%.

In a speech to the US Congress that drew a long standing ovation, an unshaven Zelensky in an army green t-shirt appealed for tougher sanctions on Russia and more weapons to help his country fight “for the values of Europe and the world”.

Speaking via a video link mainly in Ukrainian but closing in English, he invoked the Pearl Harbour and quoted Martin Luther King’s “I have a dream” speech to call for a no-fly zone over Ukraine, although he acknowledged that Washington has ruled this out.

“In the darkest time for our country, for the whole of Europe, I call on you to do more,” he said. Lawmakers were rapt as he played a video of clips showing dead and wounded children and buildings blasted by bombs.

Three weeks into the invasion, Russian troops have been halted at the gates of Kyiv, having taken heavy losses and failed to seize any of Ukraine’s biggest cities in a war Western officials say Moscow expected to win within days.

Talks were due on Wednesday by a video link for a third straight day, the first time they have lasted more than a single day.

“The meetings continue, and, I am informed, the positions during the negotiations already sound more realistic,” Zelensky said in a video address overnight.

Later on Wednesday, he said Ukrainians must fight to “defend our state, our life, our Ukrainian life,” but he also emphasized negotiations for “a just but fair peace for Ukraine, real security guarantees that will work.”

In what was seen as a major shift, Zelensky had said on Tuesday Ukraine could accept international security guarantees that stopped short of its longstanding aim to join NATO.

Keeping Ukraine out of the Western military alliance was one of Russia’s main demands in the months before it launched what it calls a “special operation” to disarm and “denazify” its neighbor.

“Neutral status is now being seriously discussed along, of course, with security guarantees,” Russia’s Lavrov said on Wednesday. “There are absolutely specific formulations which in my view are close to agreement.”

Vladimir Medinsky, Russia’s chief negotiator, told state TV: “Ukraine is offering an Austrian or Swedish version of a neutral demilitarized state, but at the same time a state with its own army and navy.”

Kremlin spokesman Dmitry Peskov said the idea “could really be seen as a compromise”.

Austria and Sweden, the biggest of six EU members outside NATO, both have small militaries that cooperate with the alliance.

He also said Kyiv was seeking direct talks between Zelensky and Russian President Vladimir Putin. Moscow has said they could meet, but only to finalize an agreement already hammered out.

“Our position at the negotiations is quite specific – legally verified security guarantees; ceasefire; withdrawal of Russian troops. This is possible only with a direct dialogue between the heads of Ukraine and the Russian Federation,” Podolyak tweeted.

While Russia has long objected to Ukraine’s NATO ambitions, Kyiv and its allies have said Moscow’s true aim was to overthrow Ukraine’s pro-Western, elected leaders, which was thwarted by Ukraine’s stiff battlefield resistance.

Britain said Russian forces were trapped on roads and struggling to cope with Ukrainian terrain. “The tactics of the Ukrainian Armed Forces have adeptly exploited Russia’s lack of maneuver, frustrating the Russian advance and inflicting heavy losses on the invading forces,” it said in an intelligence update.

The streets of the capital Kyiv were largely empty on Wednesday after authorities imposed a curfew overnight. Several buildings in a residential area were badly damaged after what appeared to be a Russian missile was shot down in the early hours of Wednesday, residents and emergency workers said.

There was no immediate word on casualties as a rescue team searched for signs of life amid the rubble.

Surrounding streets were covered with broken glass and what appeared to be a motor from the missile lay twisted on the roadside.

Still, Ukrainian forces have withstood an assault by a much larger army. Zelensky said Ukrainian troops had killed a fourth Russian major general in the latest fighting. Reuters was not immediately able to verify this.

Ukraine said about 20,000 people had escaped the besieged port of Mariupol in cars, but hundreds of thousands remain trapped under bombardment without heat, power or water.

Deputy Prime Minister Iryna Vereshchuk said it was not clear whether the corridor to the city would open on Wednesday. She said 400 staff and patients were being held hostage at a hospital Russian forces had captured in Mariupol on Tuesday.

Russia was due to pay $117 million in interest on dollar-denominated sovereign bonds, but could be forced to pay in roubles instead, amounting to its first default on foreign debt since the Bolshevik revolution. Moscow said it had the money, and Washington would be to blame if it cannot pay. – Rappler.com