Valentyn, 83, the last local resident who stayed in a village near a frontline, as Russia's attack on Ukraine continues, stands in the door of his house in Kyiv Region, Ukraine March 31, 2022. REUTERS/Serhii Nuzhnenko

Facebook Twitter Copy URL
Copied
Since Russian troops withdrew from towns and villages around the Ukrainian capital Kyiv last week, Ukrainian troops have been moving in, showing journalists corpses of what they say are civilians killed by Russian forces, destroyed houses and burnt out cars

MOTYZHYN, Ukraine – The head of the village of Motyzhyn, her husband and son were shot and buried in a shallow grave, an adviser to the Ukrainian interior ministry said on Monday, April 4, showing their partially covered bodies in the sand.

Since Russian troops withdrew from towns and villages around the Ukrainian capital Kyiv last week, Ukrainian troops have been moving in, showing journalists corpses of what they say are civilians killed by Russian forces, destroyed houses and burnt out cars.

Reuters could not independently verify who killed the family in the grave just outside Motyzhyn, west of Kyiv. Moscow has denied targeting civilians and has said similar reports of killings were “staged” to sully Russia’s name. 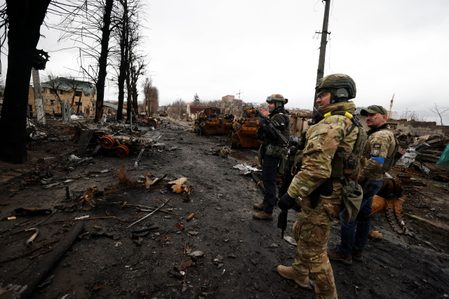 “There have been Russian occupiers here. They tortured and murdered the whole family of the village head,” said Anton Herashchenko, naming those killed as Olha Sukhenko, her husband Ihor Sukhenko and their son, Oleksandr.

“The occupiers suspected they were collaborating with our military, giving us locations of where to target our artillery. These scum tortured, slaughtered and killed the whole family. They will be responsible for this.”

A Reuters reporter saw the bodies in a forest near a farm, which had been all but destroyed, just outside the village of Motyzhyn. Nearby a burnt out tractor could be seen and one of those buried in the sand had his head taped.

The reporter also saw another body of a man in a well near to the burnt out farm, where black scorch marks climbed up its few remaining walls. He appeared to have been tied up.

Vadym Tokar, head of the Makariv village council which neighbors Motyzhyn, told Reuters the family had been taken captive by Russian forces two to three days before the troops left.

“The bodies are still lying there, we can’t get them out because there is a suspicion that they are mined,” he said by
telephone.

Global outrage spread on Monday over civilian deaths in Ukraine including evidence of bound bodies shot at close range and a mass grave found in areas retaken from Russian troops, as artillery bombarded the country’s south and east.

Reuters reporters saw on Sunday several corpses by the roadside in the Ukrainian town of Bucha, one had his hands tied behind his back and a bullet wound to his head, one of hundreds of local residents that officials say have been found dead in the wake of five weeks of Russian occupation.

On Sunday, Russia’s defense ministry said in a statement all photographs and videos published by the Ukrainian authorities alleging crimes by Russian troops in Bucha were a “provocation” and no resident of Bucha suffered violence at the hands of Russian troops. – Rappler.com