Pope Francis walking after surgery, but will lead Sunday prayer from hospital 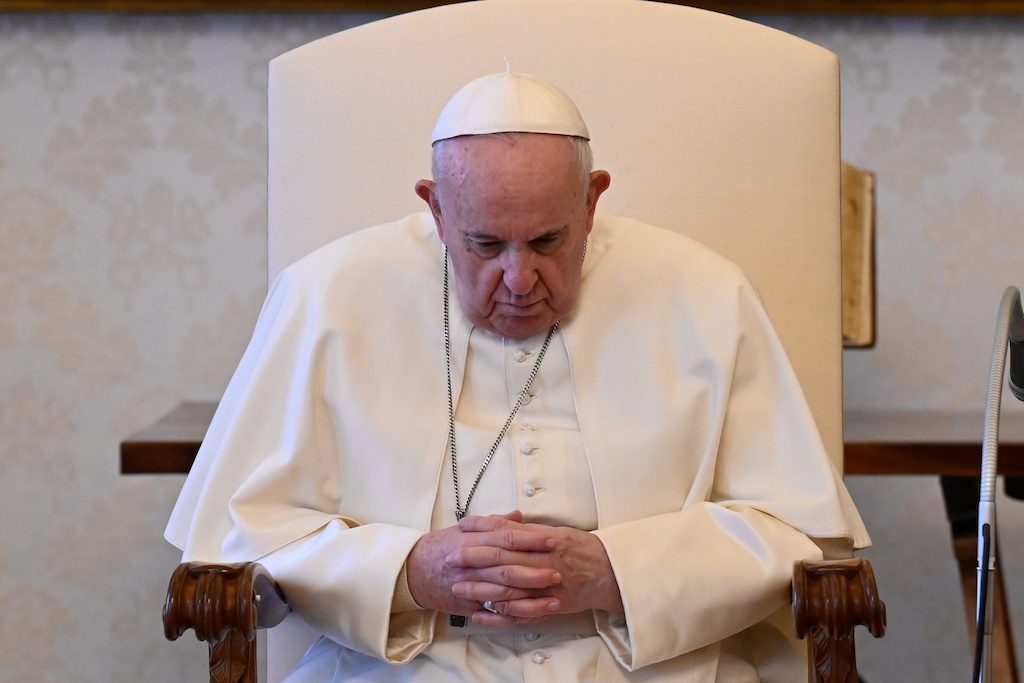 Pope Francis holds a weekly general audience in the library of the Apostolic Palace in the Vatican, April 14, 2021. Vatican Media/­Handout via REUTERS ATTENTION EDITORS - THIS IMAGE WAS PROVIDED BY A THIRD PARTY.

Facebook Twitter Copy URL
Copied
It will be the first time since his election in 2013 that Pope Francis will not read the prayer from the Vatican, except for when he was away on trips

Pope Francis is walking and working and no longer running a fever as he recovers from intestinal surgery, but he is not well enough to return to the Vatican in time for his Sunday noon blessing there, the Vatican said on Friday, July 9.

In an indication that the Pope’s recuperation could take longer than the seven days initially anticipated, it said the prayer will instead be led from Rome’s Gemelli hospital.

There had been speculation that the 84-year-old pope could be discharged on the morning of the seventh day, in time to return to St. Peter’s Square for the Sunday noon prayer.

It will be the first time since his election in 2013 that Francis will not read the prayer from the Vatican, except for when he was away on trips. The pontiff walked in the corridor and resumed his work, said Mass in the chapel of the private suite and no longer had a fever.

The Catholic-run hospital and medical university traditionally treats popes, and part of its 10th floor is permanently reserved for them. It includes its own intensive care unit.

Bruni said the prayer, known as the Angelus, would be delivered “from the 10th floor” of the hospital.

Pope John Paul II, who reigned from 1978 to 2005, was in the same hospital about 10 times and read the Sunday prayer from there, either from the window or with only audio when he was too ill to get out of bed.

Francis underwent a three-hour operation on Sunday night. It was the first time he had been hospitalized since his election as pope in 2013.

He timed the surgery for the start of July, a month in which his only public commitments are his Sunday blessings. – Rappler.com