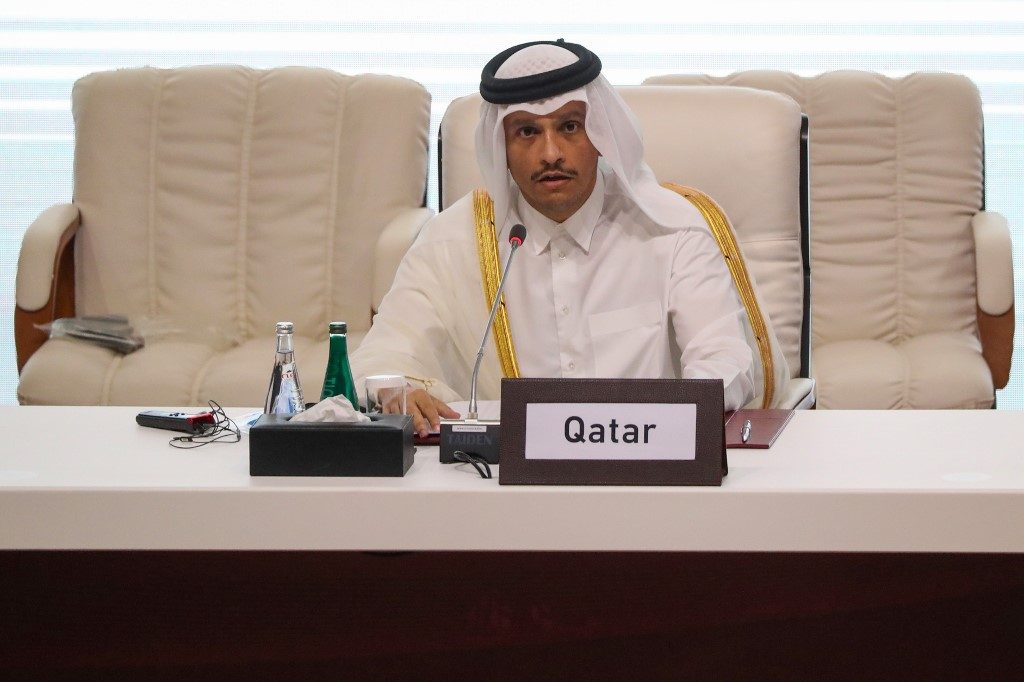 PROGRESS. Qatar's Minister of Foreign Affairs Sheikh Mohamad Bin Abdel Rahman Al-Thani delivers a speech during the opening session of the peace talks between the Afghan government and the Taliban in the Qatari capital Doha on September 12, 2020.

Facebook Twitter Copy URL
Copied
'Right now, there are some movements that we hope will put an end [to] this crisis,' says Foreign Minister Sheikh Mohammed bin Abdulrahman Al-Thani

Qatar’s foreign minister said on Friday, December 4, that there had been some progress to resolve the Gulf crisis which has pitted a regional group of nations against his country.

Saudi led its allies – the United Arab Emirates, Bahrain and Egypt – to cut ties with Qatar in 2017, accusing it of backing radical Islamist movements and Iran, charges Doha denies.

They subsequently forced out Qataris residing in their countries, closed their airspace to Qatari aircraft and sealed their borders and ports, separating some mixed-nationality families.

“We have achieved certain progress at a certain point of time more than a year ago, and then things have slowed,” Foreign Minister Sheikh Mohammed bin Abdulrahman Al-Thani said at the Mediterranean Dialogues forum in Rome.

“Right now, there are some movements that we hope will put an end [to] this crisis,” he said without giving details.

“We believe that Gulf unity is very important for the security of the region. This needless crisis needs to end based on mutual respect.”

US President Donald Trump’s son-in-law and senior adviser Jared Kushner is reported to have raised the Gulf crisis and pushed for progress towards ending the spat during a visit to Qatar Wednesday, December 2.

Few details have been made public about Kushner’s trip, which could have been his last chance to press diplomatic issues in the region that has been a focal point for the outgoing Trump administration.

Saudi Arabia’s closure of its airspace has forced Qatar Airways aircraft to fly over Iran, Riyadh’s arch-rival and long-time adversary of Washington, paying significant overflight fees to Tehran in the process.

The New York Times has reported that Qatar pays $100 million annually to fly over the Islamic republic, citing diplomatic sources.

US national security adviser Robert O’Brien said in November that allowing Qatari planes to fly over Saudi Arabia via an “air bridge” was a priority for the outgoing Trump administration.

Qatar has repeatedly said it is open to talks without preconditions, though has not signaled publicly it would compromise on the 13 demands of the boycotting countries.

Past mediation efforts led by Kuwait have yielded no results. – Rappler.com