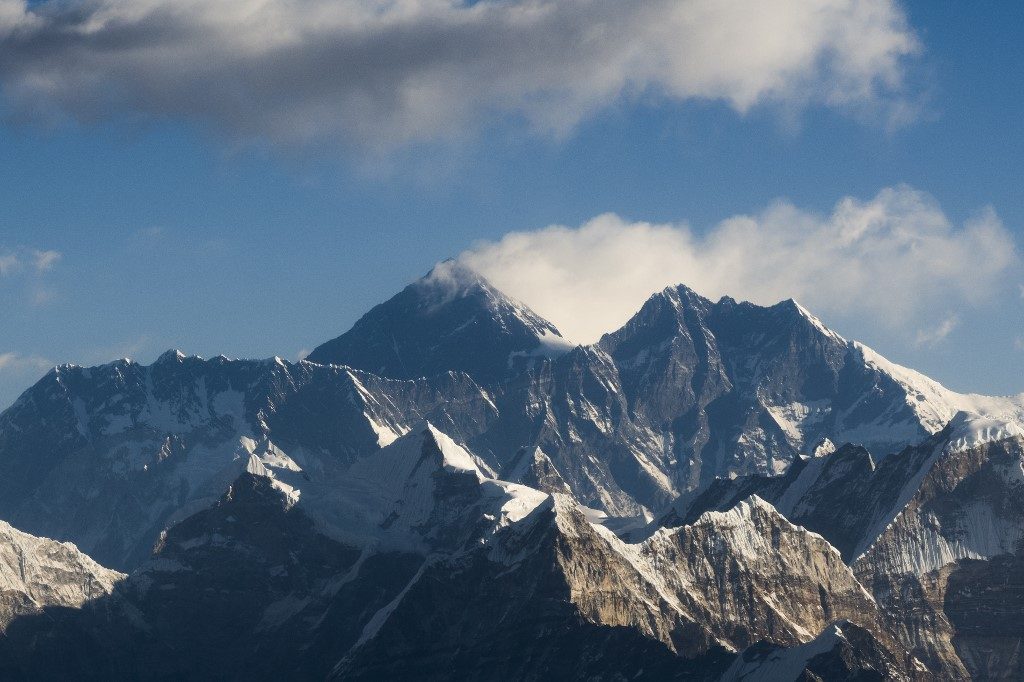 EVEREST'S HEIGHT. This file photo taken on February 7, 2020 from a commercial aircraft shows an aerial view of Mount Everest (C) and the Himalayan mountain range, some 140 kilometers northeast of Kathmandu.

Facebook Twitter Copy URL
Copied
The agreed height of 8,848.86 meters is 86 centimeters higher than the measurement previously recognized by Nepal, and more than 4 meters above China's official figure

The highest point on Earth got a bit higher Tuesday, December 8, as China and Nepal finally agreed on a precise elevation for Mount Everest after years of debate.

The agreed height of 8,848.86 meters (29,031 feet) – unveiled at a news conference in Kathmandu – was 86 centimeters (2.8 feet) higher than the measurement previously recognized by Nepal, and more than 4 meters above China’s official figure.

This discrepancy was due to China measuring the rock base on the summit and not – as with the new reading – the covering of snow and ice on the peak.

Everest straddles the border of Nepal and China.

After Edmund Hillary and Tenzing Norgay Sherpa famously first reached the summit of Everest on May 29, 1953, an Indian survey readjusted the altitude to 8,848 meters (29,028 feet).

That measurement was widely accepted, with the number appealing not only to ambitious mountaineers but also inspiring names for adventure clothing lines, restaurants and even a vodka brand.

In 1999 the US National Geographic Society concluded the world’s highest point was 8,850 meters (29,035 feet), but Nepal never officially recognized this – although it is widely quoted.

The provoked a row with Nepal, which was only resolved in 2010 when Kathmandu and Beijing agreed that their measurements referred to different things – one to the height of Everest’s rock and the other to the height of its snowcap.

Nepal decided to conduct a survey – initially alone and later joined by China – after suggestions that tectonic plate movements including a major earthquake in 2015 may have affected the height.

About 300 Nepali experts and surveyors were involved in the exercise – some on foot and others in helicopters – to reach data collection stations.

Last spring, Nepali surveyors reached the summit of Everest with over 40 kilograms (90 pounds) of equipment, including a Global Satellite Navigation System (GNSS) receiver.

They spent roughly two freezing hours collecting data as dozens of climbers stood on top of the mountain.

“Climbing Everest alone is a challenging task, but we also had to measure it,” Khim Lal Gautam, a Survey Department official who lost a toe to frostbite in the expedition, told Agence France-Presse.

Nepal was due to release the results earlier this year but then China became involved after a visit to Nepal in October 2019 by President Xi Jinping.

This year a Chinese survey expedition had a more quiet working space on the summit as they were the only climbers on a mountain shut because of the coronavirus pandemic.

Dang Yamin, an expert at the National Bureau of Surveying and Mapping, told Chinese state broadcaster CCTV that the final result was an average value between the measurements by Nepal and China, in accordance with scientific rules.

“The results have been different on different occasions, so today we end these speculations.” – Rappler.com