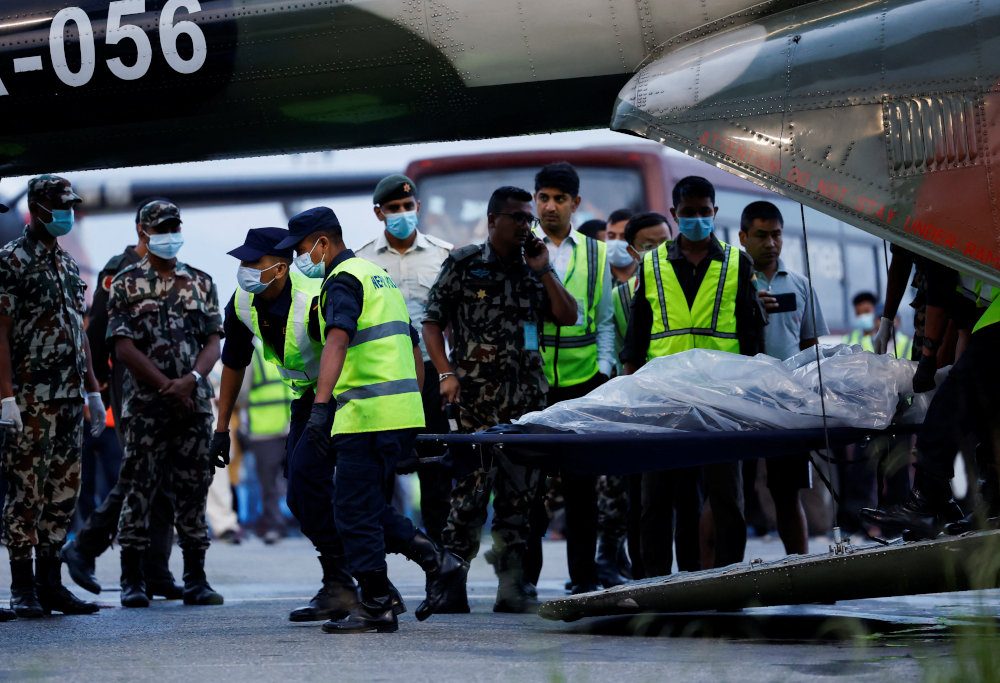 RECOVERED BODY. Members of Nepal police carry the body of a victim of the Tara Air passenger plane, that crashed with 22 people on board while on its way to Jomsom, from the helicopter at the airport in Kathmandu, Nepal on May 30, 2022.

KATHMANDU, Nepal – Nepali search and rescue teams on Tuesday, May 31, recovered the body of the last of 22 people aboard a small plane that crashed in the Himalayas two days earlier and also found the flight’s voice recorder.

Two Germans, four Indians and 16 Nepalis were on the De Havilland Canada DHC-6-300 Twin Otter aircraft that crashed 15 minutes after taking off from the tourist town of Pokhara, 125 km (80 miles) west of Kathmandu, on Sunday morning.

The plane was bound for Jomsom, a popular tourist and pilgrimage site, 80 km (50 miles) northwest of Pokhara, on what should have been a 20-minute flight.

A spokesperson for the Civil Aviation Authority of Nepal (CAAN) said the plane had only the voice recorder to preserve ground to air and air to air conversations. Modern planes have two such “black boxes” – a flight data recorder and a cockpit voice recorder.

“Nothing except the wreckage is left at the crash site now,” Deo Chandra Lal Karna told Reuters. “All the bodies and the black box have been recovered.”

Operated by privately owned Tara Air, the aircraft made its first flight in April 1979, according to flight-tracking website Flightradar24.

Soldiers and rescue workers had retrieved 21 bodies from the wreckage, strewn across a steep slope at an altitude of around 14,500 feet, on Monday.

Bodies of 10 victims were brought to Kathmandu on Monday, and the remaining 12 bodies would be flown into the capital on Tuesday and released to the families following an autopsy and identification, Karna said.

The Nepali government has set up a five-member panel to determine the cause of the crash and suggest preventive measures for the aviation sector.

Nepal, home to eight of the world’s 14 highest mountains, including Everest, has a history of air accidents.

In early 2018, a US-Bangla Airlines flight from Dhaka to Kathmandu crashed on landing and caught fire, killing 51 of the 71 people on board.

In 1992, all 167 people aboard a Pakistan International Airlines plane were killed when it plowed into a hill as it tried to land in Kathmandu. – Rappler.com