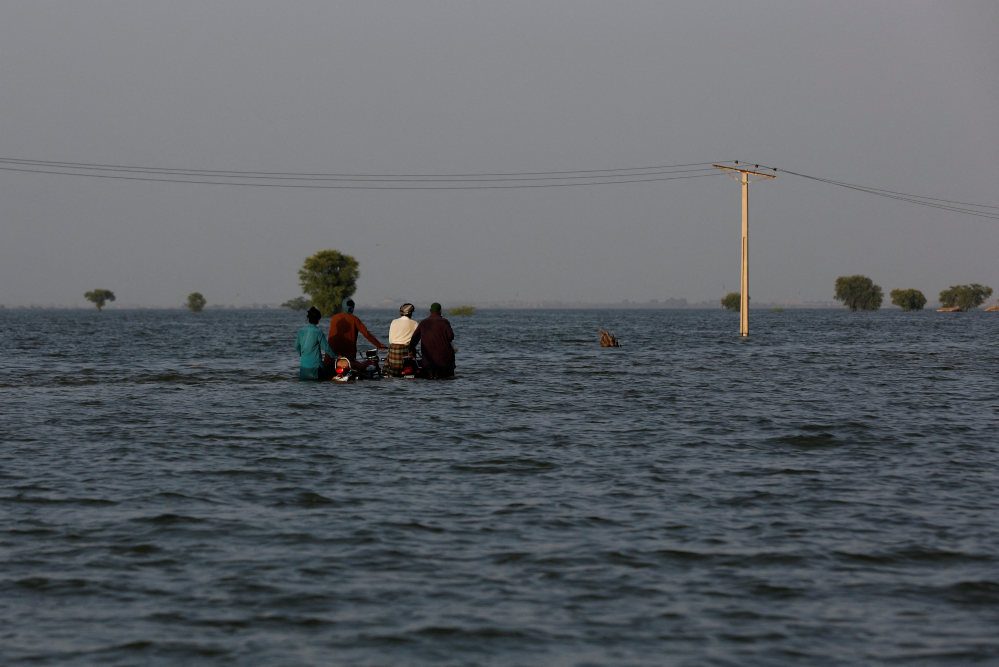 FLOODING. Men walk with their motorcycles amid flood water, following rains and floods during the monsoon season in Bajara village, at the banks of Manchar lake, in Sehwan, Pakistan on September 6, 2022.

Facebook Twitter Copy URL
Copied
As many as 33 million of a population of 220 million are affected in the disaster blamed on climate change, which officials estimate caused losses running into a minimum of $10 billion

SEHWAN, Pakistan – Eighteen more people have died in Pakistan, authorities said Wednesday, September 7, taking to 1,343 the toll in unprecedented floods that have inundated more than a third of the South Asian nation, making hundreds of thousands homeless.

As many as 33 million of a population of 220 million have been affected in the disaster blamed on climate change, which officials estimate to have caused losses running into a minimum of $10 billion. Many of the affected are from the southern province of Sindh, where Pakistan’s largest freshwater lake is dangerously close to bursting its banks, even after having been breached in an operation that displaced 100,000 people.

National disaster officials said eight children were among the dead in the last 24 hours. The floods were brought by record monsoon rains and glacier melt in Pakistan’s northern mountains.

With more rain expected in the coming month, the situation could worsen further, a top official of the United Nations’ refugee agency (UNHCR) has warned.