TOP PRIORITY. US President Joe Biden signs executive orders in the Oval Office of the White House in Washington, after his inauguration as the 46th President of the United States on January 20, 2021. 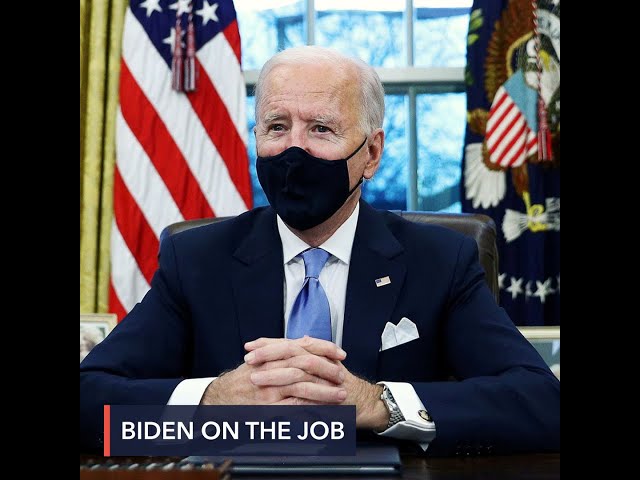 President Joe Biden launched initiatives on Thursday, January 21, to rein in the raging COVID-19 pandemic, tackling his top priority on his first full day in the White House as he tries to turn the page on Donald Trump’s tumultuous leadership.

His administration plans a coordinated federal coronavirus response aimed at restoring trust in the government and focused on boosting vaccines, increasing testing, reopening schools and addressing inequalities thrown up by the disease.

“We can and will beat COVID-19. America deserves a response to the COVID-19 pandemic that is driven by science, data, and public health – not politics,” the White House said in a statement outlining the administration’s National Strategy on for the COVID-19 Response and Pandemic Preparedness.

Later on Thursday, Biden will sign a series of executive orders related to the pandemic, including requiring mask-wearing in airports and on certain public transportation, including many trains, airplanes and intercity buses, officials said.

He will also deliver public remarks on his COVID-19 efforts.

Coronavirus has infected more than 24 million people in the United States and killed more than 405,000, the highest totals in the world. Trump frequently sought to play down the severity of the pandemic and the new Democratic president has put the disease top of a daunting list of challenges, including rebuilding a ravaged economy and addressing racial injustice.

Opening a blitz of policy measures, Biden signed 15 executive actions on Wednesday, January 20, just hours after he was sworn into office, many aimed at sweeping away Trump’s policies.

Those included mandating masks on federal property and halting the withdrawal from the World Health Organization (WHO), as well as issues such as rejoining the Paris climate accord and ending a travel ban on some Muslim-majority countries.

Among the 10 new orders, Biden will establish a COVID-19 testing board to ramp up testing, address supply shortfalls, establish protocols for international travelers and direct resources to hard-hit minority communities.

Biden has pledged to provide 100 million doses of the coronavirus vaccine during his first 100 days in office. His plan aims to increase vaccinations by opening up eligibility for more people such as teachers and grocery clerks.

Additionally, he will issue a directive on Thursday including the intent to join the COVAX vaccine facility that aims to deliver vaccines to poor countries, Biden’s chief medical adviser, Anthony Fauci, told the WHO.

Fauci will also brief reporters at the White House later on Thursday, White House spokeswoman Jen Psaki told MSNBC, cautioning any turn around on the disease will take time.

Other issues the administration said it would address over the next 10 days include healthcare, the economy, immigration and climate change.

Biden made a plea for unity during his inaugural address on Wednesday, saying overcoming the challenges facing the country would require a return to civility.

“We must end this uncivil war that pits red against blue, rural versus urban, conservative versus liberal. We can do this – if we open our souls instead of hardening our hearts,” Biden said on the steps of the Capitol, where a mob of Trump’s supporters stormed the building on Jan 6.

On Thursday, Biden plans to direct the Federal Emergency Management Administration to reimburse states and tribes fully for the costs associated with National Guard-related efforts to combat the virus, officials said.

The measure restores “full reimbursement” from the FEMA Disaster Relief Fund for costs related to reopening schools. FEMA funds are typically dispersed after hurricanes, floods or other natural disasters.

Some of Biden’s early initiatives could get bogged down in Congress, where the US Senate is considering how to proceed with the impeachment trial of Trump. The Democratic-controlled House of Representatives impeached Trump last week for inciting an insurrection in the deadly rampage at the Capitol.

House Speaker Nancy Pelosi has yet to send the article of impeachment to the Senate. According to Senate rules, the Republican former president’s trial would start the day after the charge is sent over.

Biden has urged lawmakers not to let Trump’s trial interfere with his legislative priorities and confirming his Cabinet. Psaki said on Thursday reiterated that Biden would leave the mechanics of how to proceed up to the Senate. – Rappler.com