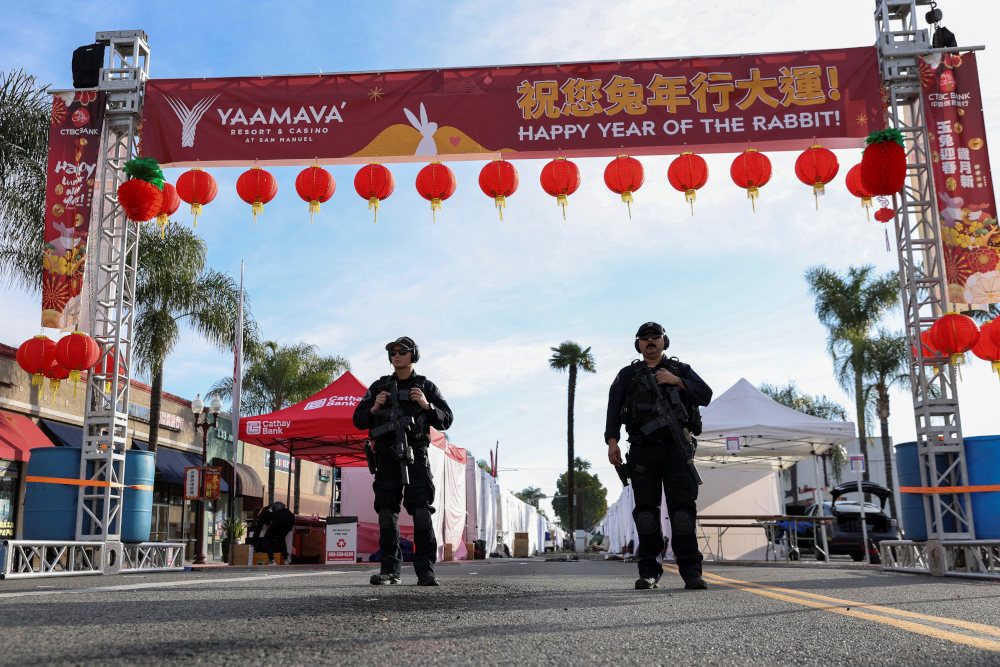 MONTEREY PARK SHOOTING. Police officers guard the area near the location of a shooting that took place during a Chinese Lunar New Year celebration, in Monterey Park, California, USA, on January 22, 2023.

A gunman killed 10 people at a ballroom dance hall during a Chinese Lunar New Year celebration late on Saturday, January 21, near Los Angeles before fleeing the scene and later killing himself when approached by police on Sunday, authorities said.

Los Angeles County Sheriff Robert Luna said during a Sunday afternoon press conference the motive for the shooting was not known. He identified the suspect as Huu Can Tran, 72, who wielded a pistol with a high-capacity magazine.

Luna said Tran turned a handgun on himself on Sunday morning as police approached a white van he was driving in Torrance, about 20 miles (34 km) from the site of the shooting at the Star Ballroom Dance Studio in Monterey Park.

Five of the victims were male and five were female, Luna said. Their identities have not been made public. Another ten people were shot, and seven of them remain hospitalized, with at least one person in critical condition, authorities said.

The sheriff’s department released images of the suspect apparently taken from surveillance camera footage showing him wearing spectacles, dressed in a dark jacket and a dark beanie hat with white stripe.

Luna confirmed that Tran was involved in another incident at a dance venue in the neighboring city of Alhambra about 20 minutes after the Saturday night shooting in Monterey Park. At the second venue, witnesses said Tran walked in holding a gun that patrons were able to grab. No one was shot and Tran fled, Luna said.

When police arrived at the Monterey Park ballroom, people were “pouring out of the location screaming,” department captain Andrew Meyer told reporters at a news briefing.

The shooting took place after 10 pm PST (0600 GMT on Sunday; 2:00 pm on Sunday in Philippine time) around the location of a two-day Chinese Lunar New Year celebration where many downtown streets are closed for festivities that draw thousands of people from across Southern California. Police said the celebrations planned for Sunday were canceled.

Residents stood gazing at the many blocks sealed off with police tape on Sunday in Monterey Park. Chester Chong, chairman of the Chinese Chamber of Commerce of Los Angeles, described the city of about 60,000 people as a quiet, peaceful, beautiful place where everybody knows each other and helps each other.

About 7 miles (11 kilometers) from downtown Los Angeles, the city has for decades been a destination for immigrants from China. Around 65% of its residents are Asian, according to U.S. Census data, and the city is known for its many Chinese restaurants and groceries.

“People were calling me last night, they were scared this was a hate crime,” Chong said at the scene.

The Star Ballroom Dance Studio opened in 1990, and its website features many photographs of past Lunar New Year celebrations showing patrons smiling and dancing in party clothes in its large, brightly lit ballroom.

Most of its patrons are middle-aged or elderly, though children also attend youth dance classes, according to a teacher at the studio who asked to not be named.

“Those are normal working people,” the teacher said. “Some are retired and just looking for an exercise or social interaction.”

The gunshots were mistaken by some for new year fireworks, according to Tiffany Chiu, 30, who was celebrating at her parents’ home near the ballroom.

“A lot of older people live here, it’s usually really quiet,” she said. “This is not something you expect here.”

Video taken by local news media showed injured people, many of them appearing to be middle aged, being loaded into ambulances on stretchers.

President Joe Biden condemned the killings in a written statement and said he had directed his Homeland Security adviser to mobilize federal support to local authorities.