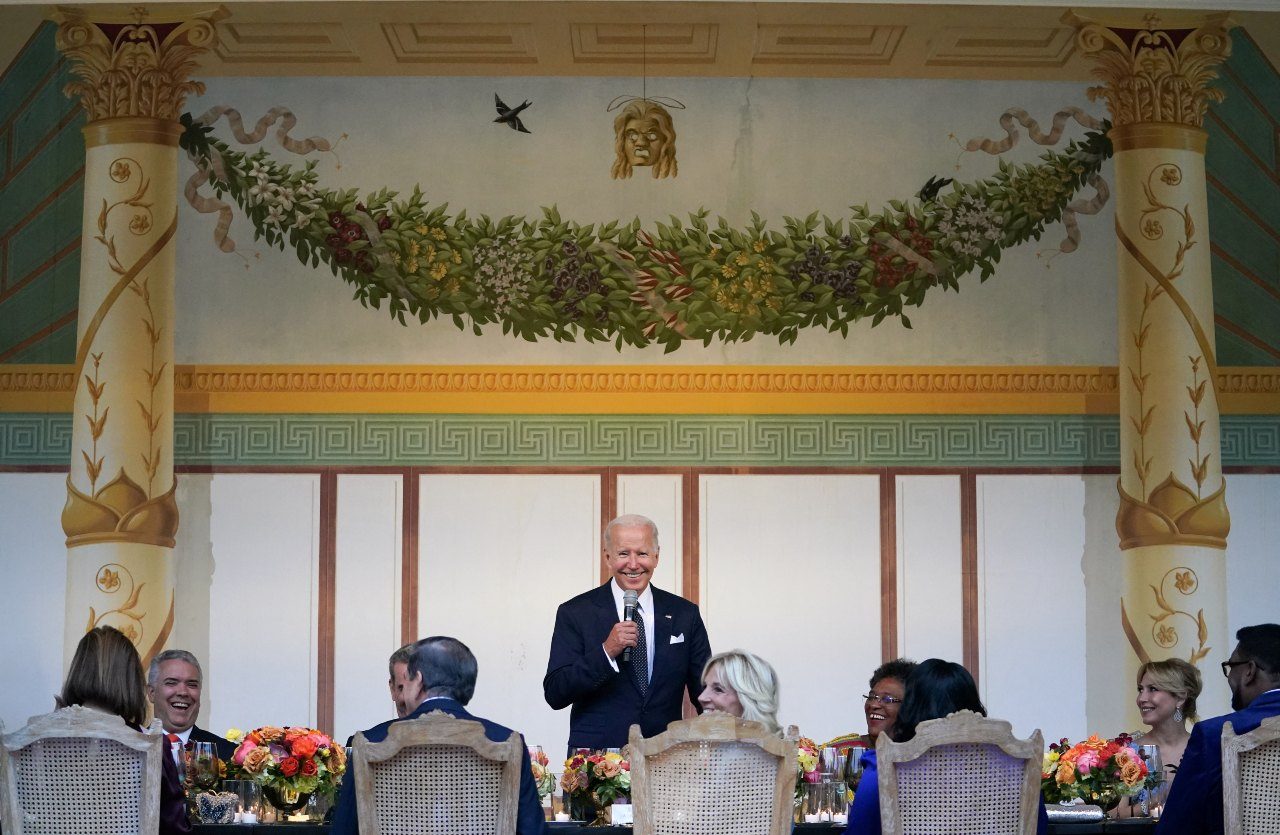 HOST. US President Joe Biden speaks while hosting a dinner at the Getty Villa for leaders and their spouses at the Summit of the Americas, in Los Angeles, California, US, on June 9, 2022.

Facebook Twitter Copy URL
Copied
Dubbed the 'Los Angeles Declaration' and described by Joe Biden as 'groundbreaking,' the US-led pact aims to create incentives for countries taking in large numbers of migrants, and to spread responsibility for the challenge across the region

LOS ANGELES, USA – US President Joe Biden and fellow leaders of the Americas are set to pitch a plan designed to stem illegal migration and manage record migrant numbers as a regional summit roiled by diplomatic squabbling draws to a close on Friday, June 10.

Dubbed the “Los Angeles Declaration” and described by Biden as “groundbreaking,” the US-led pact aims to create incentives for countries taking in large numbers of migrants, and to spread responsibility for the challenge across the region.

The migrant initiative caps a regional gathering hosted by Biden in Los Angeles that was designed to reassert US leadership and counter China’s growing economic footprint in the region.

However, that message has been clouded by a partial boycott of leaders, including Mexico’s president, in protest at Washington’s exclusion of US antagonists Cuba, Venezuela and Nicaragua from the gathering.

At the summit’s opening session on Thursday, June 9, leaders from Argentina and Belize took to the podium to rebuke Biden face-to-face over the guest list, underscoring the challenge the global superpower faces in restoring its influence among its poorer neighbors.

A draft declaration crafted by officials at the Summit of the Americas, reviewed by Reuters, set out commitments to work on mobilizing banks and donors to review instruments to help countries absorbing many migrants. But the document was short on details and specific country commitments for enacting the plan.

The declaration, a final version of which is scheduled to be presented by Biden and other visiting leaders on Friday, also outlines pledges to work on boosting regional law enforcement cooperation, information-sharing and visa regimes, and improving temporary job opportunities.

Curbing irregular migration is a top priority for Biden, a Democrat, at a time when record numbers of people are trying to enter the United States at the Mexican border.

Biden administration officials have become frustrated that their immigration policies, most of which need congressional approval, have remained deadlocked even as chronic labor shortages aggravate supply chain bottlenecks and fan inflation.

Republicans, who hope to take control of the US Senate and House of Representatives in November mid-term elections, have pilloried the president for reversing the restrictive immigration policies of his Republican forerunner Donald Trump.

But the migration issue – as well as the summit itself – has had to compete with Biden’s other pressing challenges at home and abroad ranging from surging inflation, debate over gun control after more mass shootings, and the war in Ukraine.

US efforts to stem migration from the so-called Northern Triangle region – Guatemala, Honduras and El Salvador – have been hampered by corruption, with projects likely worth millions shelved and some private sector engagement stalled.

The new migration plan is in line with the Biden administration’s efforts in recent months to portray the issue as a challenge for all of the Americas, calling on other countries to strengthen protection systems for migrants and expand their access to legal pathways.

The absence of the leaders of Mexico, Guatemala, Honduras and El Salvador have raised doubts about how effectively the proposed pledges will become reality, although US officials said the turnout would not prevent Washington from getting results. – Rappler.com