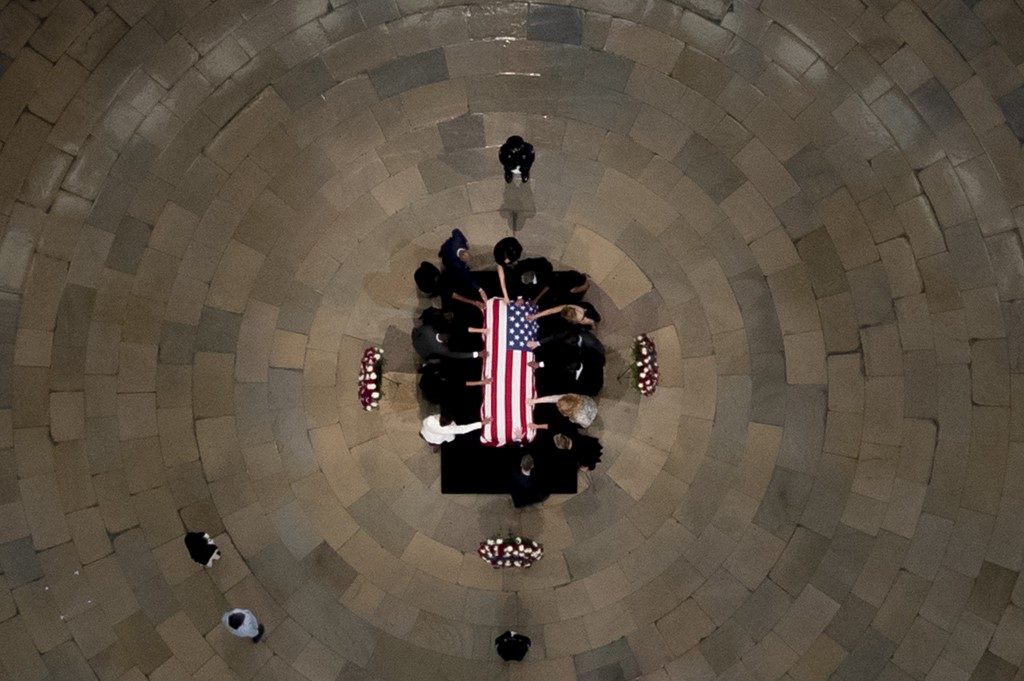 BELOVED. Members of the Faith and Politics Institute pause for prayers to pay their respects to the flag-draped casket of the late Rep. John Lewis, D-Ga., as he lies in state at the Capitol Rotunda in Washington, DC July 27, 2020. Photo by Jonathan Ernst/AFP

Facebook Twitter Copy URL
Copied
A military honor guard escorts Lewis' flag-draped casket into the rotunda of the US Capitol, a rarely bestowed honor, after a motorcade drove it through the streets of the US capital

The body of Congressman John Lewis was lying in state at the US Capitol on Monday, July 27, as Americans paid their final tributes to the civil rights icon.

Former vice president Joe Biden, the Democratic presidential nominee, and Vice President Mike Pence were among those expected to pay their respects.

Lewis, a 17-term Democratic member of the US House of Representatives from the southern state of Georgia, died of pancreatic cancer on July 17 at the age of 80.

A military honor guard escorted Lewis’ flag-draped casket into the rotunda of the US Capitol, a rarely bestowed honor, after a motorcade drove it through the streets of the US capital.

Representative Elijah Cummings, who died last year, was the first black congressman to lie in state in the Capitol although in Statuary Hall, not in the rotunda.

Other politicians who have lain in state recently in the Capitol include former president George H.W. Bush and Arizona senator John McCain.

“It is fitting that John Lewis joins this pantheon of patriots,” Nancy Pelosi, the Democratic speaker of the House, said at a solemn ceremony.

“John Lewis became a titan of the civil rights movement and then the conscience of the Congress,” Pelosi said.

Lewis’ casket was to be moved outside to the Capitol’s steps later in the day to allow members of the public to pay tribute in a socially distanced manner on Tuesday.

The hearse carrying Lewis’ body to the Capitol paused briefly in front of the Lincoln Memorial during the trip and also stopped at “Black Lives Matter” Plaza, a stretch of street which has been cordoned off a couple of blocks from the White House.

Lewis was a persistent critic of Donald Trump and the Republican president was asked on Monday if he would not be going to the Capitol to pay his respects.

On Sunday, a lone caisson drawn by two black horses carried Lewis’ body across the Alabama bridge where in 1965 a policeman fractured his skull during a protest that helped forge his reputation as a fearless civil rights leader.

The procession across the Edmund Pettus Bridge in the city of Selma came on the second of six days of solemn commemorations for Lewis.

It also came in a year when the “Black Lives Matter” protests against police brutality have brought thousands onto US streets, underscoring the still-raw depths of the country’s racial history.

The procession was saluted by a line of Alabama state troopers – a starkly different reception from what Lewis received on the March 7, 1965 march in Selma, when a trooper beat the then-25-year-old to the ground, nearly killing him.

The march, on a day later dubbed “Bloody Sunday,” was considered a turning point in the civil rights movement.

Lewis grew up in the Alabama city of Troy. His parents were sharecroppers, and he once worked in a cotton field. While attending segregated schools, Lewis was inspired by the peaceful protests of civil rights leaders like Martin Luther King Jr.

On Thursday, the commemorations for Lewis will end in Atlanta, Georgia, where he will be remembered in a private service in the Ebenezer Baptist Church, where King once preached. Lewis’ burial will follow. – Rappler.com