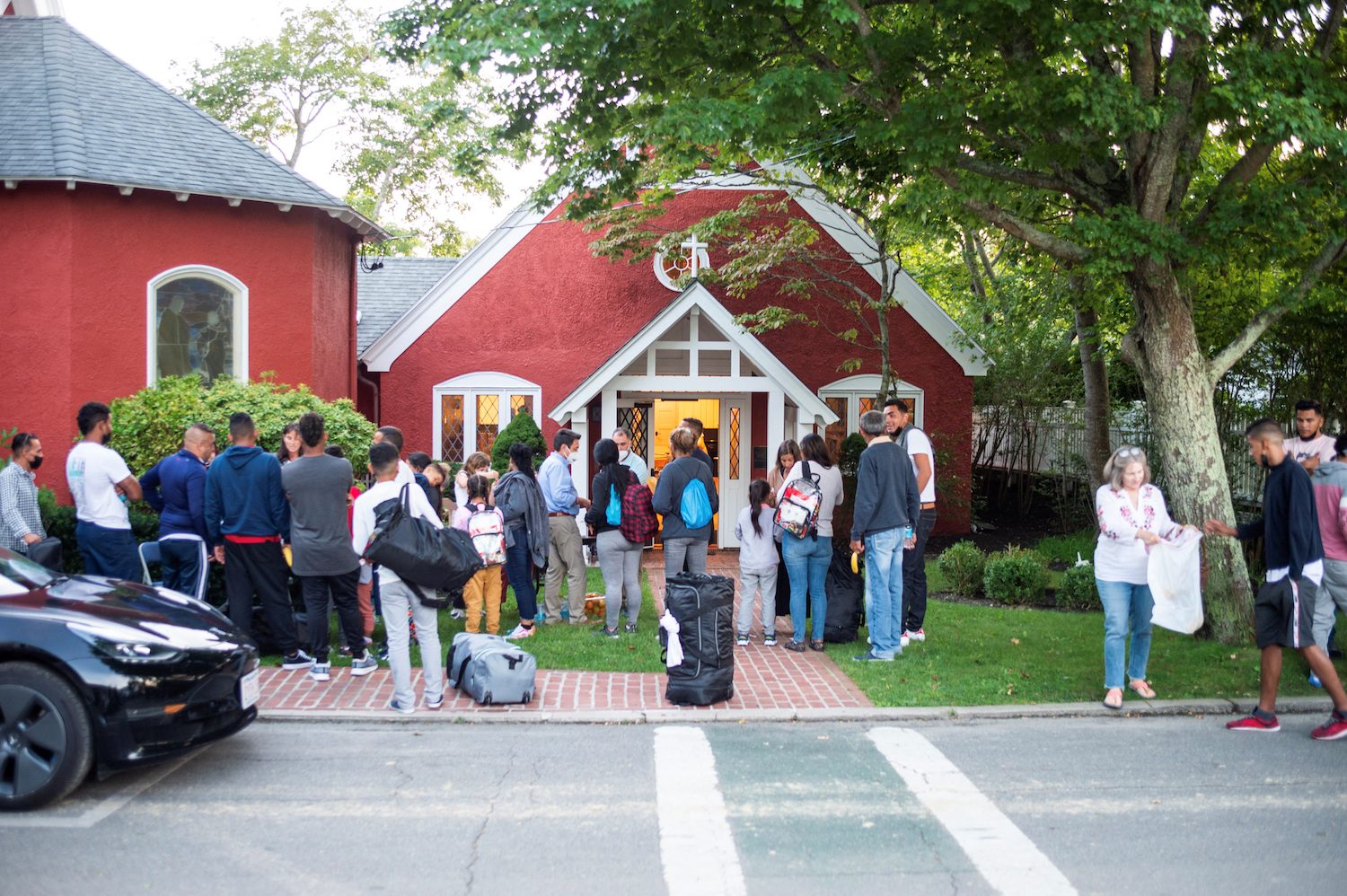 Facebook Twitter Copy URL
Copied
The use of resources from Florida to move migrants from Texas to Massachusetts raises legal concerns including what information was relayed to the migrants before they boarded airplanes and whether they were coerced, says an immigration law expert

Massachusetts, USA – Some migrants who were flown to the wealthy island of Martha’s Vineyard, Massachusetts, said on Thursday, September 15, they were duped about their destination, and Democratic leaders called for a probe of the move by Florida’s Republican governor to send them there from Texas.

In what the White House and residents of the vacation enclave called a “political stunt,” Florida Governor Ron DeSantis took credit for the two flights. Tracking website FlightAware said they originated in San Antonio, Texas.

One Venezuelan migrant who identified himself as Luis, 27, said he and nine relatives were promised a flight to Massachusetts, along with shelter, support for 90 days, help with work permits and English lessons. He said they were surprised when their flight landed on an island.

He said the promises came from a woman who gave her name as “Perla” who approached his family on the street outside a San Antonio shelter after they crossed from Mexico and US border authorities released them with an immigration court date.

He said the woman, who also put them up in a hotel, did not provide a last name or any affiliation, but asked them to sign a liability waiver.

“We are scared,” he said adding he and others felt they were lied to. “I hope they give us help.”

Residents of Martha’s Vineyard, a small island south of Boston, were rallying to help the confused migrants and offered housing at St. Andrews Episcopal Church, sometimes used as a homeless shelter in winter.

Martha’s Vineyard is best known as a summer retreat populated mostly by affluent liberal Americans including former President Barack Obama, a Democrat who owns a multimillion-dollar vacation home there.

Locals stopped by to offer the migrants money donations and children’s toys, while attorneys mobilized to offer free legal help. Massachusetts Governor Charlie Baker said the state was looking into setting up a temporary shelter in nearby Cape Cod.

“It’s a stunt to make political points and not caring about who gets hurt,” said Mike Savoy, 58, a nurse at Martha’s Vineyard Regional High School.

DeSantis, who is seeking re-election in November and has been mentioned as a possible presidential candidate in 2024, said in a news conference that US President Joe Biden, a Democrat, “has refused to lift a finger” to secure the border.

“We’ve worked on innovative ways to be able to protect the state of Florida from the impact of Biden’s border policies,” he said.

Since this spring, Republican governors of Texas and Arizona have bused thousands of migrants from the border to Democratic strongholds such as Washington, DC, New York City and Chicago.

On Thursday, two buses sent by Texas Governor Greg Abbott, another Republican facing re-election, dropped off migrants in a Washington D.C. neighborhood not far from Vice President Kamala Harris’ official residence. Volunteers who were awaiting their arrival at another location said they had no warning.

Biden, speaking at an event hosted by the Congressional Hispanic Caucus Institute, accused Republicans of “playing politics with human beings, using them as props.”

Several Democrats, including Charlie Crist, DeSantis’ opponent in Florida, and California Governor Gavin Newsom, called on federal authorities to investigate the incident, saying it displayed a lack of humanity.

Massachusetts US Attorney Rachael Rollins said at a press conference her office would be “looking into that case” and speaking with the Justice Department.

The use of resources from Florida to move migrants from Texas to Massachusetts raises legal concerns including what information was relayed to the migrants before they boarded airplanes and whether they were coerced, immigration law expert Pratheepan Gulasekaram of Santa Clara University School of Law told Reuters.

The Florida legislature has appropriated $12 million to transport migrants from the state to other locations, DeSantis spokesperson Taryn Fenske said in a statement.

US border agents have made 1.8 million migrant arrests at the US-Mexico border this fiscal year, which began last October. Many have repeatedly crossed and are quickly expelled to Mexico or other countries under a public health rule implemented in 2020 to curb the spread of COVID-19.

Hundreds of thousands Cubans, Nicaraguans, Venezuelans, and other migrants cannot be expelled because Mexico will not accept them, or because they received exceptions to the expulsion order and are allowed into the United States to pursue asylum claims.

Many migrants who are released from U.S. custody in border states seek to move elsewhere to join relatives or find jobs. They often must check in with US immigration authorities or attend court hearings to obtain legal status. – Rappler.com