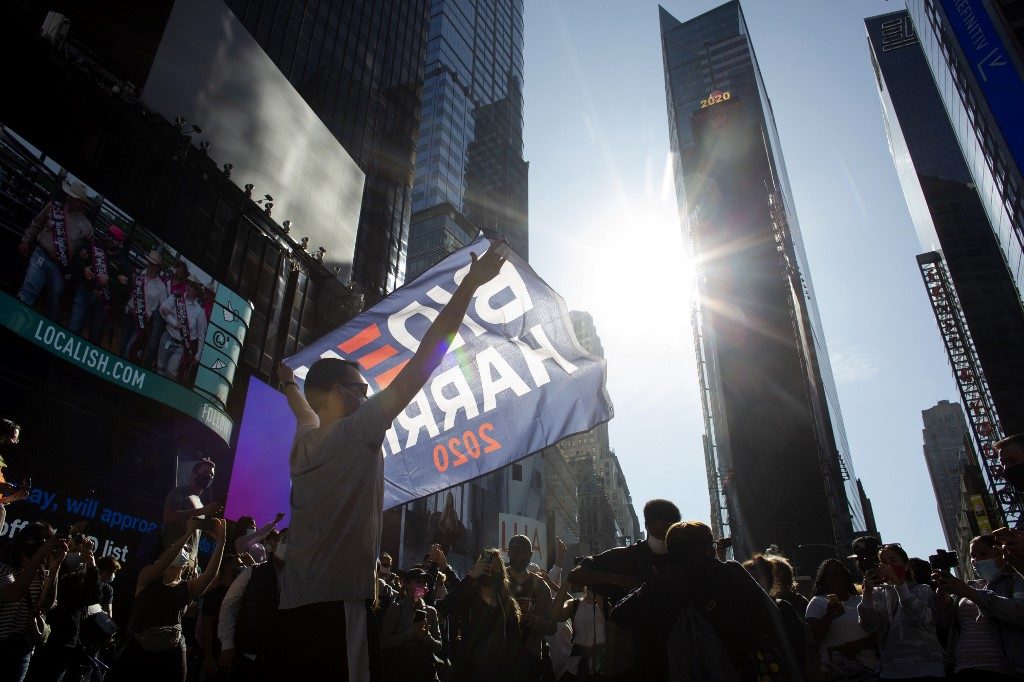 People celebrate at Times Square in New York after Joe Biden was declared winner of the 2020 presidential election on November 7, 2020. - Democrat Joe Biden has won the White House, US media said November 7, defeating Donald Trump and ending a presidency that convulsed American politics, shocked the world and left the United States more divided than at any time in decades. (Photo by Kena Betancur / AFP)

Facebook Twitter Copy URL
Copied
A reliable Democratic stronghold, the US financial capital's disdain for the Republican's policies is no secret

Joyous New Yorkers poured into the streets Saturday, November 7, after Democrat Joe Biden defeated Donald Trump to win the White House, erupting in celebration as the business mogul and former star of The Apprentice was told: “You’re fired.”

Revelers cheered across a city that has sparred for years with the President who rose to prominence in the New York real estate.

A reliable Democratic stronghold, the US financial capital’s disdain for the Republican’s policies was no secret.

In Manhattan residents yelled and clapped, some waving flags and others banging pots from their balconies as car horns punctuated the applause.

Catherine Griffin cried tears of joy outside with one of her two kids, telling Agence France-Presse: “I’m happy that Trump has gone from our lives, hopefully forever.”

“Having a little normalcy back in our lives, and my kids being able to see a decent human being in charge again – that just makes me happy for the day,” the 47-year-old said.

Hundreds of people gathered outside Trump Tower, as large crowds at Brooklyn’s Grand Army Plaza – in a nod to the outgoing President’s “You’re fired!” catchphrase from his days hosting The Apprentice – chanted: “Trump got fired!”

Thousands more began amassing at Times Square and Columbus Circle, where a demonstration to protect the integrity of ballot tallying turned into a giant party.

“Biden has won finally,” said JD Beebe, a 35-year-old who works at an online company.

“I just feel like it’s a very American moment,” he said, adding: “I know the country is split almost 50/50, but I still think this is a very good day for democracy.

“I’m honestly looking forward to not every day having to be on a roller coaster about what ridiculous thing our leadership is going to say, or what they’re going to do to any oppressed portion of the community.” – Rappler.com