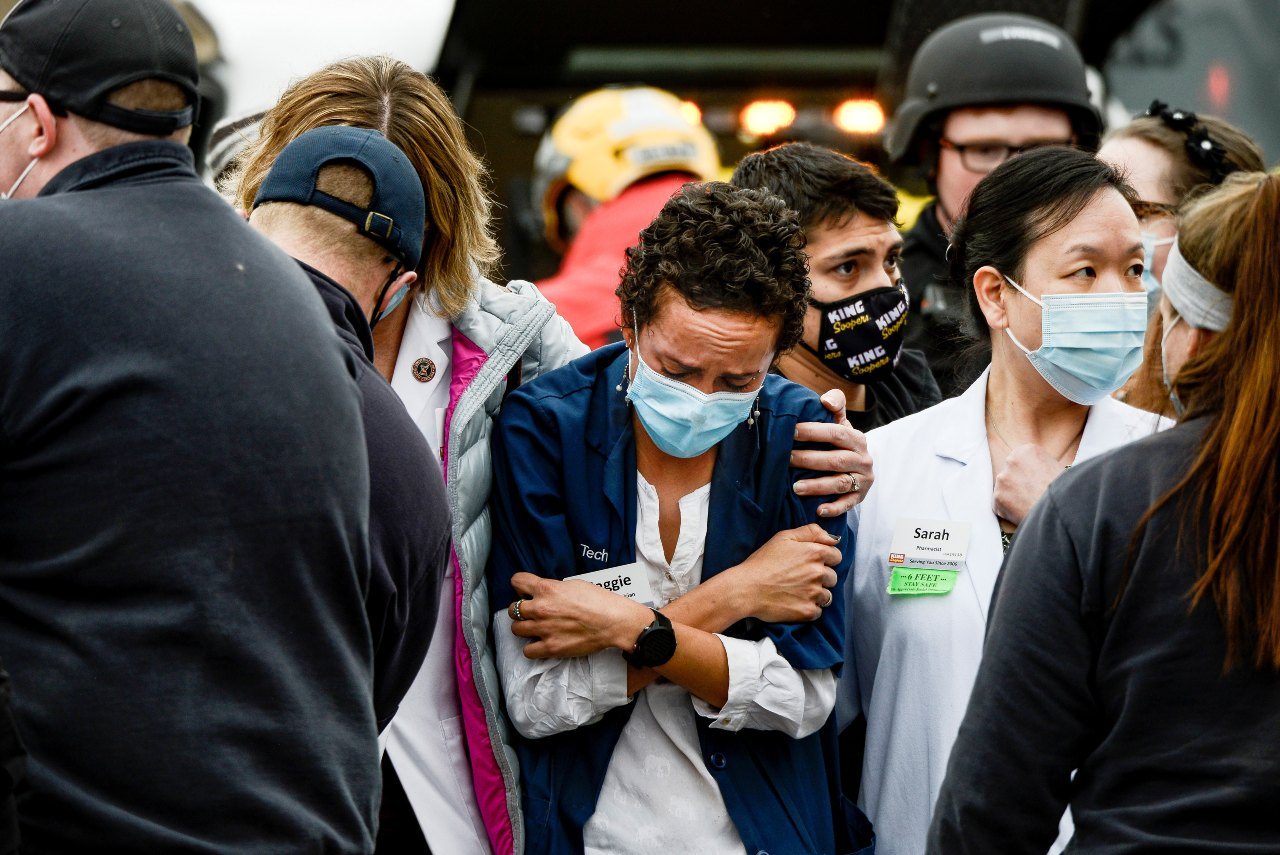 MOURNING. A woman consoles a King Soopers pharmacy technician after a shooting at the grocery store in Boulder, Colorado, US, on March 22. 2021.

A 21-year-old man faces 10 counts of murder in connection with the mass shooting on Monday, March 22, at a Colorado grocery store, but his motive remains unclear, authorities said on Tuesday, March 23.

The suspect, identified by police as Ahmad Al Aliwi Alissa of Arvada, Colorado, was in stable condition after suffering a leg wound in an exchange of gunfire with responding police officers at the King Soopers outlet in Boulder, about 28 miles (45 km) northwest of Denver, on Monday afternoon.

The 10 victims, whose names were released at a Tuesday morning news conference, range in age from 20 to 65 and include Eric Talley, an 11-year veteran of the Boulder police force. Talley, 51, was the father of seven children and had recently been looking for a less dangerous job, according to a statement released by his father.

The bloodshed marked the country’s second mass shooting in a week. A gunman went on a killing spree on March 16 in the Atlanta area, fatally shooting eight people at three day spas before he was arrested.

Investigators said they were confident Alissa had acted alone, though they did not offer any details on what might have motivated the massacre.

“It would be premature for us to draw any conclusions at this time,” Michael Schneider, the agent in charge of the FBI’s field office in Denver, said at a news briefing.

Alissa is expected to be released from the hospital later on Tuesday and transported to jail to await an initial court appearance, officials said.

Monday’s attack, which began around 2:40 pm, drew hundreds of police officers to the scene and sent terrified shoppers and employees fleeing for safety amid the sound of gunfire.

The shooting added to the Rocky Mountain state’s tragic list of mass killings that include some of the most shocking episodes of gun violence in US history, including the 2012 mass shooting at a movie theater in Aurora and the 1999 rampage at Columbine High School near Littleton.

“My heart aches today,” Governor Jared Polis said on Tuesday. “Flags had barely been raised back to full-mast after the tragic shooting in Atlanta that claimed eight lives, and now a tragedy here close to home at a grocery store that could be any of our neighborhood grocery stores.”

In Washington, President Joe Biden planned to deliver remarks on the shooting before departing for a trip to Ohio, the White House said.

Congresswoman Nancy Pelosi, the Democratic leader of the House of Representatives, said the violence again underscored the need for stricter gun laws, which have stalled in Congress amid Republican opposition.

At a previously scheduled Senate Judiciary Committee hearing on gun violence, Chairman Dick Durbin, a Democrat, urged colleagues to do more than mourn the lives lost.

“In addition to a moment of silence, I would like to ask for a moment of action,” he said. “What are we doing, other than reflecting? That’s a good starting point. That shouldn’t be the end point.”

Witnesses in Colorado described a chaotic and frightening scene inside the store during Monday’s attack.

Ryan Borowski, 37, went in looking for something to satisfy a sugar craving. He had picked out a 12-pack of soda and a bag of chips when he heard shots ring out, sending him scurrying for the store’s back exit.

“It was pretty terrifying,” he said. “Fastest fire drill I’ve ever been in.”

Sarah Moonshadow, 42, was at the checkout line with her adult son, Nicholas, when the gunfire began.

Moonshadow said she tried to attend to a victim she saw lying on the pavement outside the store, but her son pulled her away, telling her, ‘We have to go.'” She broke down in sobs recounting their ordeal, adding, “I couldn’t help anybody.” – Rappler.com