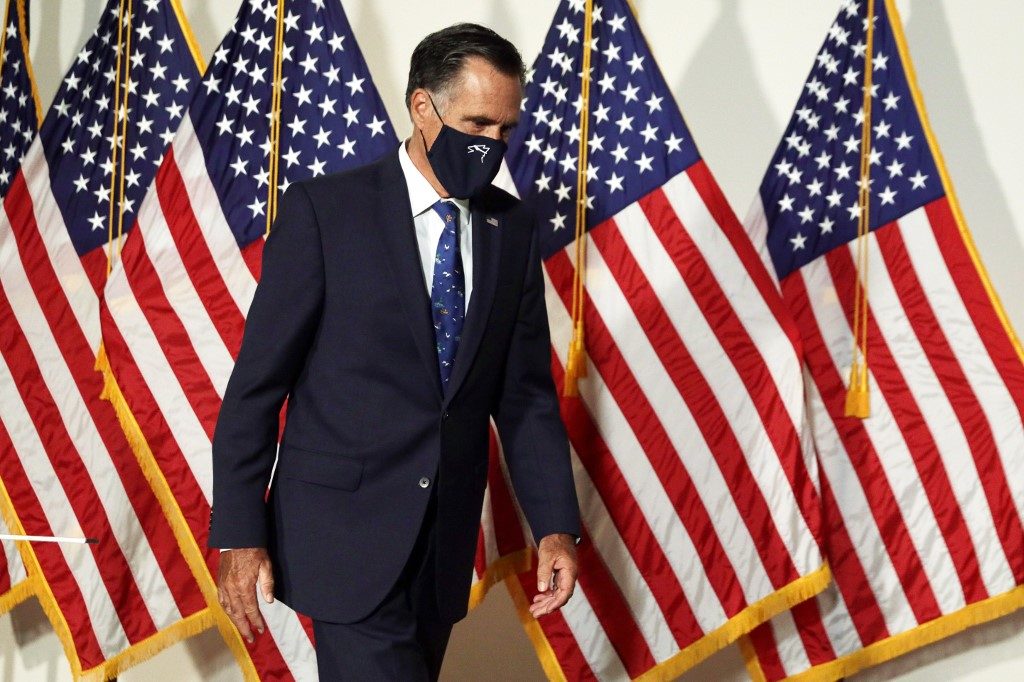 Facebook Twitter Copy URL
Copied
'He is wrong to say that the election was rigged, corrupt and stolen,' says Senator Mitt Romney

Donald Trump’s unfounded accusations of fraud in the US presidential election have been condemned by some of his fellow Republicans, but top party figures have maintained their support.

With results showing Democratic challenger Joe Biden edging closer to victory, Trump made a series of allegations without evidence on Thursday night, November 5, in a speech that was widely condemned.

Senator Mitt Romney, the former Republican presidential candidate who has been strongly critical of Trump, was among those speaking out.

“He is wrong to say that the election was rigged, corrupt and stolen,” Romney said in a statement, while noting that Trump nevertheless had the right to pursue legal remedies if he had evidence of fraud.

“Doing so damages the cause of freedom here and around the world, weakens the institutions that lie at the foundation of the republic, and recklessly inflames destructive and dangerous passions.”

But his stance was not shared by party leaders.

On Friday morning, November 6, one of the country’s most powerful Republicans, Senate majority leader Mitch McConnell, released a vague statement that did not condemn the President’s bid to sow doubt over the counting process.

“Here’s how this must work in our great country: Every legal vote should be counted,” he tweeted.

“Any illegally submitted ballots must not. All sides must get to observe the process. And the courts are here to apply the laws & resolve disputes.”

The top Republican in the House of Representatives, Kevin McCarthy, said on Twitter it was “far from over. Republicans will not back down from this battle.”

Other Republicans who have also been strong supporters of Trump offered unqualified backing, including Senator Lindsey Graham, who said he was donating $500,000 to the President’s legal defense fund.

Senator Ted Cruz of Texas repeated some of the Trump team’s allegations on the Fox News show hosted by Sean Hannity – among the President’s favorites.

“I am angry and I think the American people are angry,” Cruz said.

But there were other voices of condemnation from Republicans.

Senator Pat Toomey of Pennsylvania, whose state is a key battleground in the election and which has been the target of repeated Trump allegations, did so firmly.

“The President’s speech last night was very disturbing to me because he made very, very serious allegations without any evidence to support it,” Toomey told CBS while also criticizing aspects of the vote count in Philadelphia.

US Representative Will Hurd of Texas, a former CIA undercover officer, issued strong criticism, saying on Twitter that the unfounded allegations were “dangerous.”

“It undermines the very foundation this nation was built upon,” he wrote.

Republican strategist Karl Rove, who helped George W. Bush to victory in the 2000 race eventually decided by the US Supreme Court, said fraud involving hundreds of thousands of ballots would require a James Bond-like conspiracy.

“All candidates are entitled to pursue appropriate election-law remedies if they have evidence supporting their claims,” he wrote on Twitter.

“They should certainly not lie.”

Many Republicans kept their distance, no doubt concerned with angering the man who will remain President until at least January 20 and who, regardless of the outcome, will maintain a strong following nationwide.

Unlike Trump, Republicans senators were also in good position to maintain their control over the body based on the results on Tuesday, November 3.

A few stars of the party strayed ever so cautiously, including Senator Marco Rubio, who ran against and harshly criticized Trump during the 2016 Republican primaries before becoming a solid supporter.

He did not condemn Trump’s speech directly, choosing instead to point out a series of democratic principles.

As he has done frequently, he also tweeted a biblical passage without further comment.

“Scoundrels, villains, are they who deal in crooked talk. Proverbs 6:12,” he wrote. – Rappler.com