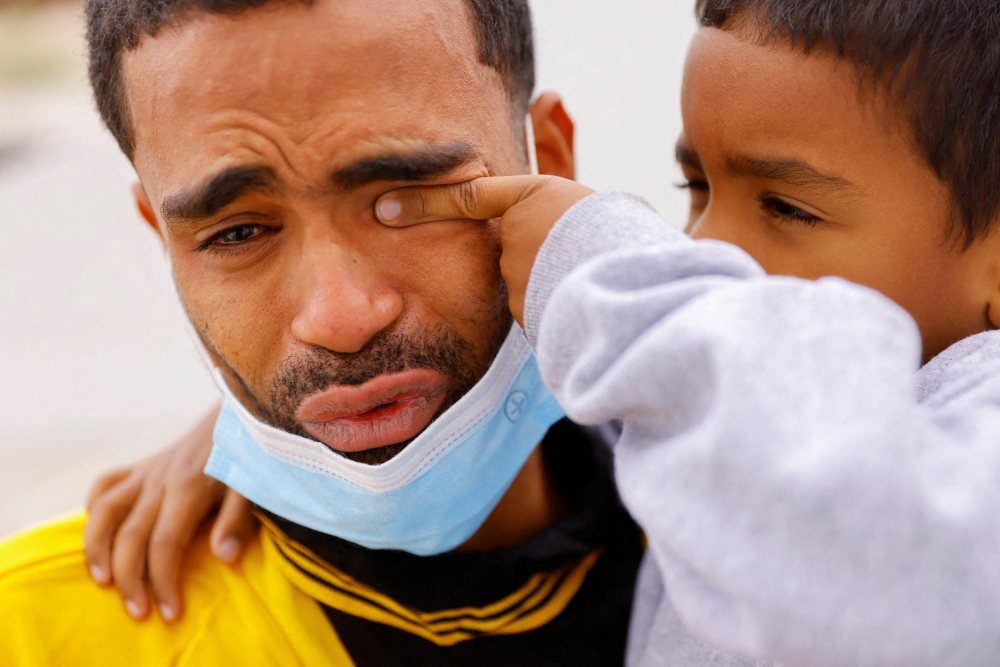 TURNED BACK. Saul, 4, wipes the tears of his father Franklin Pajaro, after they were expelled from the US and sent back to Mexico under Title 42, near the Paso del Norte International border bridge, in Ciudad Juarez, Mexico October 17, 2022.

As hundreds of Venezuelan migrants were expelled to Mexico from the United States under a new policy over the past week, the United Nations voiced concern that shelters were being overwhelmed, leaving families without places to stay in the dangerous border region.

More than 3,000 Venezuelans have been returned to Mexico since the policy began last week, Dana Graber Ladek, the Mexico chief of mission for the UN-backed International Organization for Migration (IOM) said on Tuesday, October 18, as protests against the measures ramped up near major border crossings.

Under a bilateral plan announced on Wednesday, Washington said it would grant up to 24,000 Venezuelans humanitarian access to the United States by air, while enabling US officials to expel to Mexico those caught trying to cross illegally by land.

“It’s very concerning to see people who are outside the shelters, there’s no space,” she added, saying families with vulnerable people including pregnant women, single mothers and people with illnesses were being expelled.

Ciudad Juarez, next to El Paso, has taken most migrants, with over 1,000 people, followed by Tijuana, opposite San Diego, with close to 700, according to local officials.

Venezuelans are also being sent to the smaller border cities of Matamoros, Nogales and Piedras Negras, under the U.S. plan to curb a sharp increase migrant traffic this year from the economically battered South American country.

Mexico, meanwhile, is worried many Venezuelans are still heading north to reach the US border, a Mexican official said.

In Ciudad Juarez, young girls at a protest of several hundred people held a sign reading, “President Biden, we crossed the Darien jungle to see our father,” referring to the treacherous route between Colombia and Panama often taken by Venezuelans bound for the United States.

Venezuelan migrant Franklin Pajaro told Reuters he was sent to Ciudad Juarez on Monday with his wife and two children after six days in US detention, without food, clothing or money.

“They left us on the street,” he said, as his four-year-old son Saul wiped tears from his father’s eyes. “There are many families like us, and we’re suffering.” – Rappler.com