US will issue proposal to preserve program for ‘Dreamer’ immigrants – DHS 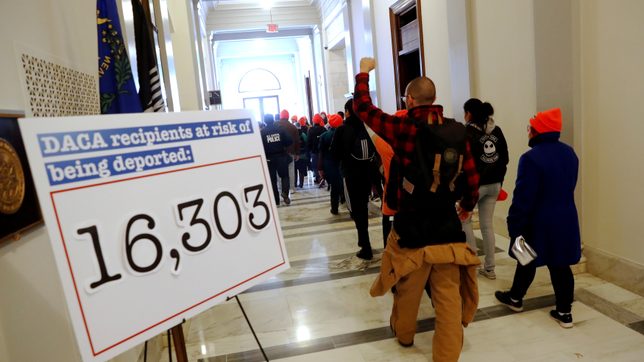 PROTECTIONS FOR DREAMERS. Demonstrators calling for new protections for so-called "Dreamers," undocumented children brought to the US by their immigrant parents, walk through a Senate office building on Capitol Hill in Washington, DC, on January 17, 2018.

Facebook Twitter Copy URL
Copied
'We are taking action to preserve and fortify DACA,' Alejandro Mayorkas, secretary of the Department of Homeland Security, says on the Deferred Action for Childhood Arrivals program

The US Department of Homeland Security said on Friday, March 26, it will issue a proposed rule to preserve and fortify a program for immigrants, nicknamed “Dreamers,” who are living illegally in the United States after entering as children.

President Joe Biden issued a memo on January 20, his first day in office, that directed the agency and the US attorney general to maintain the Deferred Action for Childhood Arrivals (DACA) program, which protects Dreamer immigrants from deportation.

“We are taking action to preserve and fortify DACA. This is in keeping with the President’s memorandum,” Alejandro Mayorkas, secretary of the Department of Homeland Security, said in a statement.

“It is an important step, but only the passage of legislation can give full protection and a path to citizenship to the Dreamers who know the US as their home,” he said.

The Democratic-controlled US House of Representatives last week passed a bill providing a pathway to citizenship for Dreamers, but the legislation faces an uncertain future in the deeply divided Senate.