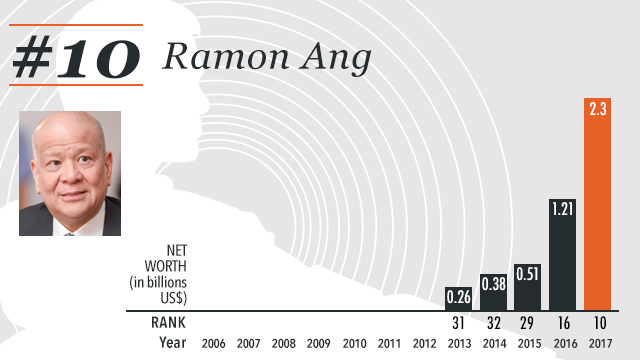 MANILA, Philippines – It is the first time for tycoon Ramon Ang to be among Forbes Asia’s top 10 richest Filipinos, after his cement manufacturing company Eagle Cement Corporation saw a favorable initial public offering (IPO) last May in the middle of an aggressive infrastructure push by President Rodrigo Duterte.

During Eagle Cement’s first day of trading, its stock price rose 2% to close at P15.30 from its IPO price of P15 apiece, after Ang announced market share is expected to hit 25% over the next two to 3 years. (READ: Eagle Cement aims to be market leader by 2020)

Eagle Cement, which is run by Ramon’s son John Paul Ang, saw its net income increase by 13% to P2.2 billion in the 1st half of 2017 even as local cement prices hit a 4-year low. Ramon’s daughter Monica Ang also serves as the cement firm’s chief finance officer.

Aside from Eagle Cement, Ang’s other businesses, including diversified conglomerate San Miguel Corporation, have been doing well this year in terms of financial performance.

It was Ang, San Miguel’s largest shareholder, who was able to turn it from a food and beverage company into the country’s most diversified conglomerate.

Under Ang’s leadership, San Miguel continues to grow its network by undertaking merger and acquisition deals, as well as participating in public infrastructure projects.

In just a year’s time, the conglomerate has bought and merged with several firms – latest of which is its acquisition of Australian bottler Barossa Bottling Services. Aside from merger and acquisition deals, San Miguel has also been active in submitting unsolicited proposals for certain public infrastructure projects.

Last February, Ang revived San Miguel’s proposed $14-billion international airport project, rivaling the offer of Sy’s group. The proposed airport is meant to either replace or complement the Ninoy Aquino International Airport (NAIA), the country’s main gateway which is bursting at the seams.

This multibillion-dollar unsolicited proposal is undergoing review of the National Economic and Development Authority (NEDA).

In March, San Miguel announced plans to propose a $2-billion, 14-meter spillway project that would allow the waters of Laguna de Bay in the east of Metro Manila to flow directly to Manila Bay. In exchange, Ang wants the government to give San Miguel the right to use waste materials from Laguna de Bay for power generation.

San Miguel had also announced plans for the groundbreaking of its single biggest investment so far: a P1-trillion petrochemical facility in the south of Manila.

A unit of San Miguel also plans to build a 500-megawatt pumped storage hydro project in Tarlac, once regulators approve its application for a service contract.

Aside from Eagle Cement and San Miguel, Ang’s family also owns a hotel and about a hundred acres of prime real estate, said Forbes. – Rappler.com