Philippine inflation continues to rise at 4.3% in March 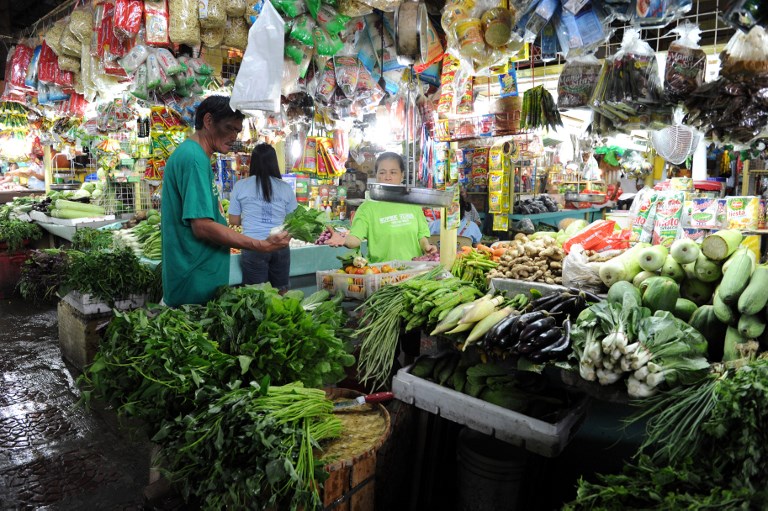 MANILA, Philippines (UPDATED) – Inflation, or the movement of prices of basic goods and services, continued to rise to 4.3% in March, as the tax reform law jacked up the costs of food and oil in the country.

The Philippine Statistics Authority (PSA) on Thursday, April 5, reported inflation rising to 4.3% in March, from the revised 3.8% in February.

Using base year 2012, inflation in the 1st quarter averaged 3.8%, closer to the higher end of the 2% to 4% target set by the Bangko Sentral ng Pilipinas (BSP) for 2018. (READ: EXPLAINER: How the tax reform law affects Filipino consumers)

The PSA has rebased the inflation index to 2012 prices, from the previous series using the 2006 prices, as part of the protocol of statistical rebasing regularly done every 6 years.

Higher annual rates were noted for food and non-alcoholic beverages; alcoholic beverages and tobacco; housing, water, electricity, gas, and other fuels; furnishing, household equipment, and routine maintenance of the house; health; communication; as well as restaurant and miscellaneous goods and services.

PSA data showed that the movement of food prices surged to 5.7% in March, from 4.8% in February. Higher price increases were noted for rice, corn, fish, fruits, and vegetables. 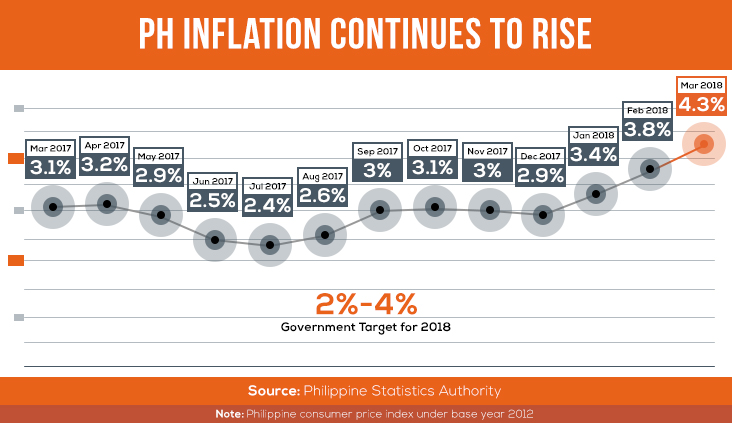 As early as January 2017, the PSA had announced its plan to update the consumer price index (CPI) and other national accounts using 2012 as the base year, partly because prices of oil and other commodities have dramatically changed in the past decade.

University of Asia and the Pacific (UA&P) economist Victor Abola said the rebasing of the CPI and other national accounts is important because they “tend to be overstated” if prices are not updated.

“This is because new, cheaper, and more features are not immediately included in the CPI survey since they were not in the original market basket,” Abola added in a note.

According to the PSA, the next base year will be 2018.

Meanwhile, BSP Governor Nestor Espenilla Jr told reporters that monetary authorities would “carefully evaluate the appropriateness of a measured policy response to firmly anchor inflation expectations in line with our forecast that inflation targets will continue to be met in 2018 and 2019.”

Despite the risks brought about by the new tax reform law, the BSP kept the interest rates unchanged, as the central bank is optimistic inflation would ease starting the last quarter of 2018.

The central bank said it expects inflation to continue rising until the 3rd quarter of 2018.