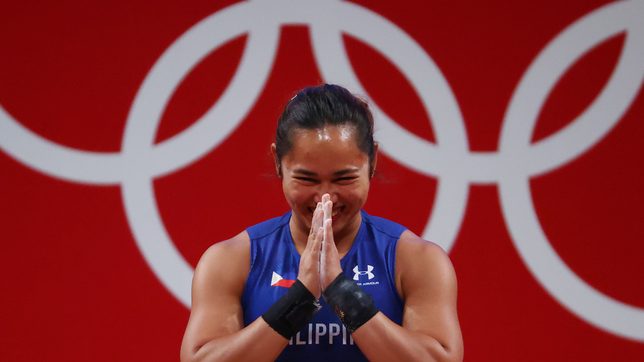 Facebook Twitter Copy URL
Copied
'Hidilyn reminds us that no matter how heavy the weight we are carrying, inner strength, perseverance, and a heart of gold will help us power through,' says AirAsia Group CEO Tony Fernandes

Added to Olympic gold medalist Hidilyn Diaz’s long list of rewards is a lifetime of free flights from AirAsia.

Diaz can fly to over 140 destinations within the AirAsia network across Asia, Australia, the Middle East, and the United States.

AirAsia on Tuesday, July 27, celebrated Diaz’s win as a historic moment for the Philippines, which was almost a century in the making.

“We want all ASEAN to believe that they can always make it happen. Amidst challenges and struggles as we go forth with recovery, Hidilyn reminds us that no matter how heavy the weight we are carrying, inner strength, perseverance, and a heart of gold will help us power through,” said AirAsia Group chief executive officer Tony Fernandes.

“Hidilyn is the perfect example of what it means to be an Allstar, by embodying AirAsia core values of ‘Dreaming Big and Making it Happen.’ We thank her for reminding us that being the world’s best is second to serving the Filipinos. The Allstar family is one in celebrating with Hidilyn, and it is our great honor to serve her onboard,” Isla said.

Diaz made history when she closed out the women’s 55-kilogram event with a golden lift of 127 kg in the clean and jerk. She is the first-ever Filipino Olympic gold medalist.

So far, the 30-year-old weightlifter will be receiving a total of P35.5 million from tycoons Ramon Ang and Manny Pangilinan, the Philippine government, House Deputy Speaker Mikee Romero, and the Zamboanga City government.

She was also awarded a P14-million condominium unit in Quezon City from Megaworld Corporation, a house and lot from the Century Properties Group, and a house and lot in Tagaytay City from House Deputy Speaker Abraham Tolentino, who is also the head of the Philippine Olympic Committee.

In 2016, Diaz won a silver medal during the Rio Olympics. – Rappler.com