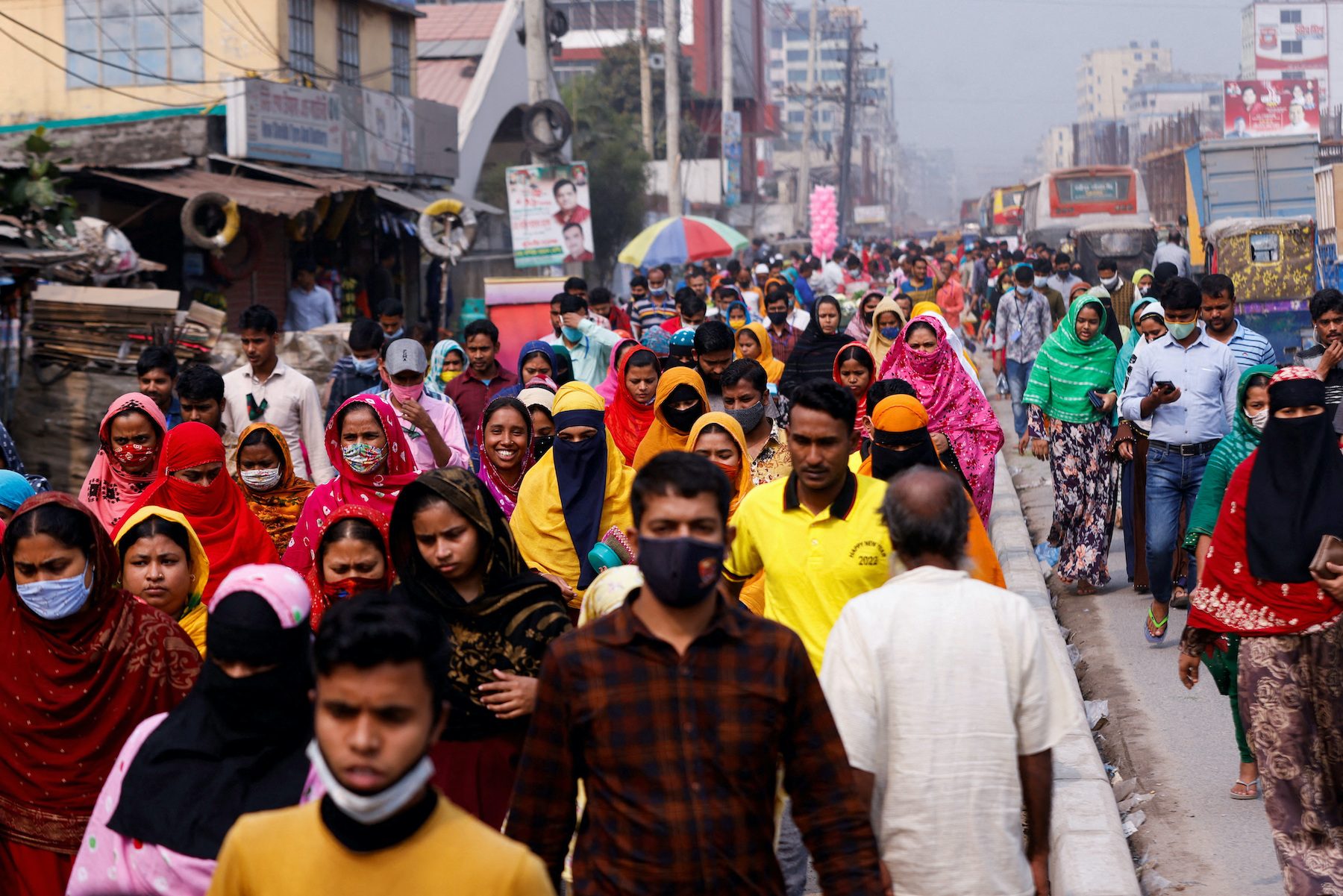 WORKERS. Garment workers go back to their homes to have lunch during lunch break in Gazipur, Bangladesh, February 3, 2022.

DHAKA, Bangladesh – Growth in Bangladesh’s garment exports could drop to about 15% this year after an unusually strong expansion of more than 30% in 2021, two industry leaders told Reuters on Wednesday, August 10, as US and European customers grapple with cost of living pressures.

The garment industry accounts for more than 80% of total exports for Bangladesh, which sells to clients such as Walmart, Gap, H&M, VF Corporation, Zara, and American Eagle Outfitters – some of which have already flagged weak sales as their customers prioritize basics.

The slowdown follows a surge in sales in 2021 after coronavirus lockdowns eased and government stimulus measures left consumers with disposable cash, leading to what some experts have dubbed “revenge shopping.”

“We should be at about 15% growth for the calendar year – this is going to be a normal year,” said Miran Ali, a vice president at the Bangladesh Garment Manufacturers and Exporters Association (BGMEA). “Last year was an abnormally high jump.”

Bangladesh, the world’s second biggest garment exporter after China, saw exports soar 30.4% to $35.8 billion last year, the biggest year-on-year jump in about 25 years. BGMEA data since 1994 shows a big jump in exports in a year is typically followed by slower growth in the next.

Fazlul Hoque, managing director of Plummy Fashions and former president of the Bangladesh Knitwear Manufacturers & Exporters Association, said he too believed exports would rise by about 15% this year.

Hoque said his customers were delaying orders by a month or so and cutting order sizes. One big US client, which he declined to name, initially wanted a small shipment that was to leave this month to be delayed until December.

The client later asked for only a month’s delay after Plummy warned them about penalties and other charges for holding on to the stock for longer.

“If they want to delay such small orders for a few months, that means the situation is not really good,” Hoque said. “They can’t even accommodate the small volume.”

The other worry is rising input costs, after Bangladesh on Saturday, August 6, raised fuel prices by around 50% amid high international prices. Fuel accounts for about 10% of garment companies’ total costs, Hoque said, adding that the use of diesel generators had gone up due to lengthy power cuts.

“After the abnormal oil price hike, production costs will go up sharply,” said Shahidullah Azim, another BGMEA vice president. “We’ll have to bear losses for the already placed order.”

He said exports could grow to between $38 billion and $40 billion this year – or 6% to 12% growth – and that the next year “could be even worse if the global economy tips into recession.”

Bangladesh last month became the third South Asian country after Pakistan and Sri Lanka to seek a loan from the International Monetary Fund as its foreign exchange reserves shrank and the trade deficit jumped. – Rappler.com