Biden set to revamp US trade tactics – but not policy 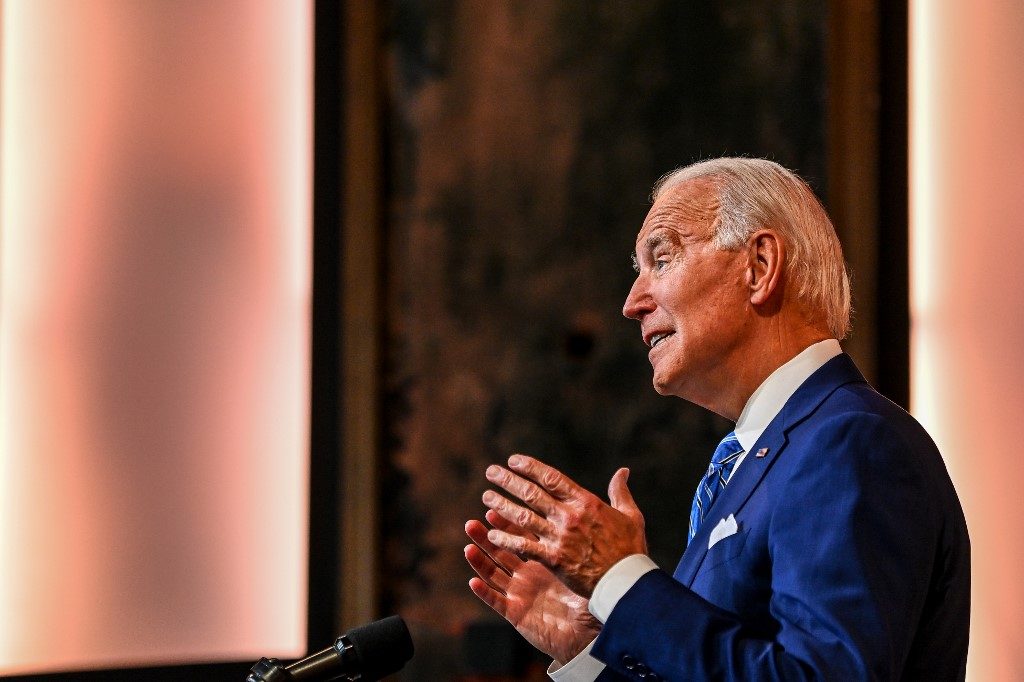 THANKSGIVING ADDRESS. US President-elect Joe Biden delivers a Thanksgiving address at the Queen Theatre in Wilmington, Delaware, on November 25, 2020.

United States President-elect Joe Biden undoubtedly has plans to roll back many of President Donald Trump’s policies when he takes charge of the White House next month, but when it comes to trade, he has signaled little may change – at least at first.

In an interview with The New York Times published on Wednesday, December 2, Biden, who defeated Trump in last month’s presidential election, made it clear his first job will be reviving the beaten-down US economy, not radically shifting trade policy.

“I want to make sure we’re going to fight like hell by investing in America first,” Biden told the newspaper.

“I’m not going to enter any new trade agreement with anybody until we have made major investments here at home and in our workers,” including in education.

The statements carry major implications for US friends and foes alike, perhaps none more than China.

Trump started a trade war with Beijing amid complaints of unfair subsidies and intellectual property theft.

A “phase one” deal signed earlier this year cooled tensions, and Biden’s comments indicate he plans to stick to that agreement initially, and will not end the tariffs slapped on Beijing.

Analysts say the comments show the incoming president understands the risk of upending Washington’s trade relations at a time when the economy is reeling from the damage inflicted by the COVID-19 pandemic, or of angering the coalition of domestic allies that helped him win election.

“On China, this is no surprise,” Eswar Prasad, an economics professor at Cornell University, told Agence France-Presse.

“Biden would have received enormous pushback from the labor unions and from the China hawks in the Republican Party if he had removed the tariffs without demanding concessions from China.”

Trump’s erratic diplomacy left Washington going it alone in its spat with Beijing, and Biden in the interview said he would focus immediately on mending fences.

“The best China strategy, I think, is one which gets every one of our – or at least what used to be our – allies on the same page. It’s going to be a major priority for me in the opening weeks of my presidency to try to get us back on the same page with our allies,” he said.

He acknowledged that when it comes to “leverage” over Beijing, “we don’t have it yet.”

Improved relations with allies, particularly the European Union, likely would give Washington a stronger position to press China for further concessions.

Prasad said Biden’s team “will be handed a baseline for trade and economic negotiations with China that is heavily skewed toward conflict rather than cooperation.”

“The new administration will feature significant shifts in strategy and tactics compared with the Trump administration’s approach, but the overall hostile posture toward China is likely to remain unchanged,” Prasad said.

Another key issue will be Biden’s approach to the European Union, which also was hit with a series of tariffs under Trump, and is locked in numerous disputes with the US on issues ranging from the aerospace industry to digital taxation.

The regional bloc seems willing to cooperate: the Financial Times reported that Brussels is working on a plan to revitalize its partnership with Washington to tackle everything from stopping the pandemic to deforestation.

“I think the Biden administration will be amenable to such an initiative,” said Edward Alden of the Council on Foreign Relations, noting that an agreement on digital taxation could bring Washington revenues it sorely needs.

But Biden’s comments also indicate a new free trade deal that Britain has wanted from Washington post-Brexit will not happen anytime soon. – Rappler.com