Facebook Twitter Copy URL
Copied
With Britain facing a lengthy recession sparked by a near quadrupling of household energy bills, Prime Minister Liz Truss sets out what she describes as bold and immediate action to protect consumers and businesses

With Britain facing a lengthy recession sparked by a near quadrupling of household energy bills, Truss set out what she described as bold and immediate action to protect consumers and businesses just three days after she took office.

“This is the moment to be bold. We are facing a global energy crisis, and there are no cost-free options,” she told parliament.

“We are supporting this country through this winter and next, and tackling the root causes of high prices so we are never in the same position again.”

She said supply would also be stepped up, with a moratorium on fracking dropped and new oil and gas exploration licenses issued for the North Sea.

“Energy policy over the past decade has not focused enough on securing supply,” Truss said.

She said average household energy bills would be held at around 2,500 pounds a year for two years, staving off the expected 80% leap that was due in October and that threatened the finances of millions of households and firms.

The government said it would pay energy suppliers the difference between the new cap and the price the suppliers would have charged customers were this not in place.

Businesses will also be given support, with details to come at a later date.

With wholesale gas prices remaining highly volatile, the government did not put a price on the combined package, but it is expected to run into the tens of billions of pounds and will be funded by government borrowing.

Economists believe the plan is likely to add more than 100 billion pounds to Britain’s debt pile, while Deutsche Bank has estimated that the energy price offset plus tax cuts that Truss has also promised could together cost 179 billion pounds.

That would be around half the sum that Britain spent on the COVID-19 pandemic.

Separately, the Treasury and Bank of England (BoE) will also address extraordinary liquidity requirements faced by energy firms that Truss said would be worth 40 billion pounds. 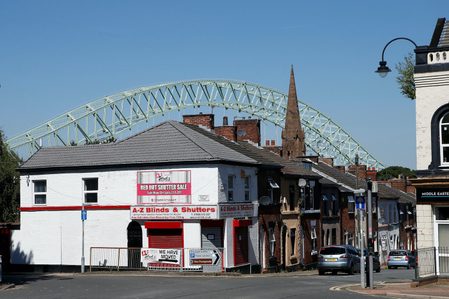 The scale of the plan by a leader who had ruled out “handouts” during her campaign to succeed Boris Johnson has rattled financial markets. Its full cost will be given later this month by new finance minister Kwasi Kwarteng.

The pound fell against the dollar on Wednesday, September 7, to levels last hit in 1985.

Sterling rose by around half a cent against both the dollar and euro as Truss spoke, but later gave up its gains. Britain’s government bond market – which fell heavily in the weeks leading up to Thursday’s announcement – extended losses, pushing 10-year yields to their highest since 2011.

“The scale of the fiscal intervention announced today is huge, but so is the size of the problem facing UK households and businesses,” said Hugh Gimber, a strategist at JP Morgan Asset Management.

European energy prices started to rise as the world emerged from COVID-19 lockdowns and then surged in February following Russia’s invasion of Ukraine.

The government expects the package to curb inflation by up to 5 percentage points. Consumer price inflation in Britain jumped to 10.1% in July, the highest since February 1982, and was forecast by the BoE to exceed 13% in October.

Economists responded by cutting their forecasts for how high inflation would peak early next year. US bank Citi – which had one of the highest forecasts – lowered it to 11.7% from 17.4%, while consultancy Pantheon Macroeconomics said recession would be “narrowly avoided.”

NatWest revised up its forecast for the future cost of new 10-year government borrowing to 4% from 3%, partly in response to the extra debt.

While the new cap will soften the blow for millions of households, it still poses a threat to those on limited incomes. An Office for National Statistics survey published in September showed more than 4 in 10 adults already found it very or somewhat difficult to afford energy bills.

The opposition Labour Party questioned why it was not partly funded by a windfall tax on the sector, and why more would not be done to improve insulation.

Britain was a net exporter of energy from the late 1980s to 2004 following the development of North Sea oil and gas fields, but production steadily declined from a peak in 1999.

The country is now a net importer of all main fuel types, with 38% of the energy it used in 2021 imported. – Rappler.com