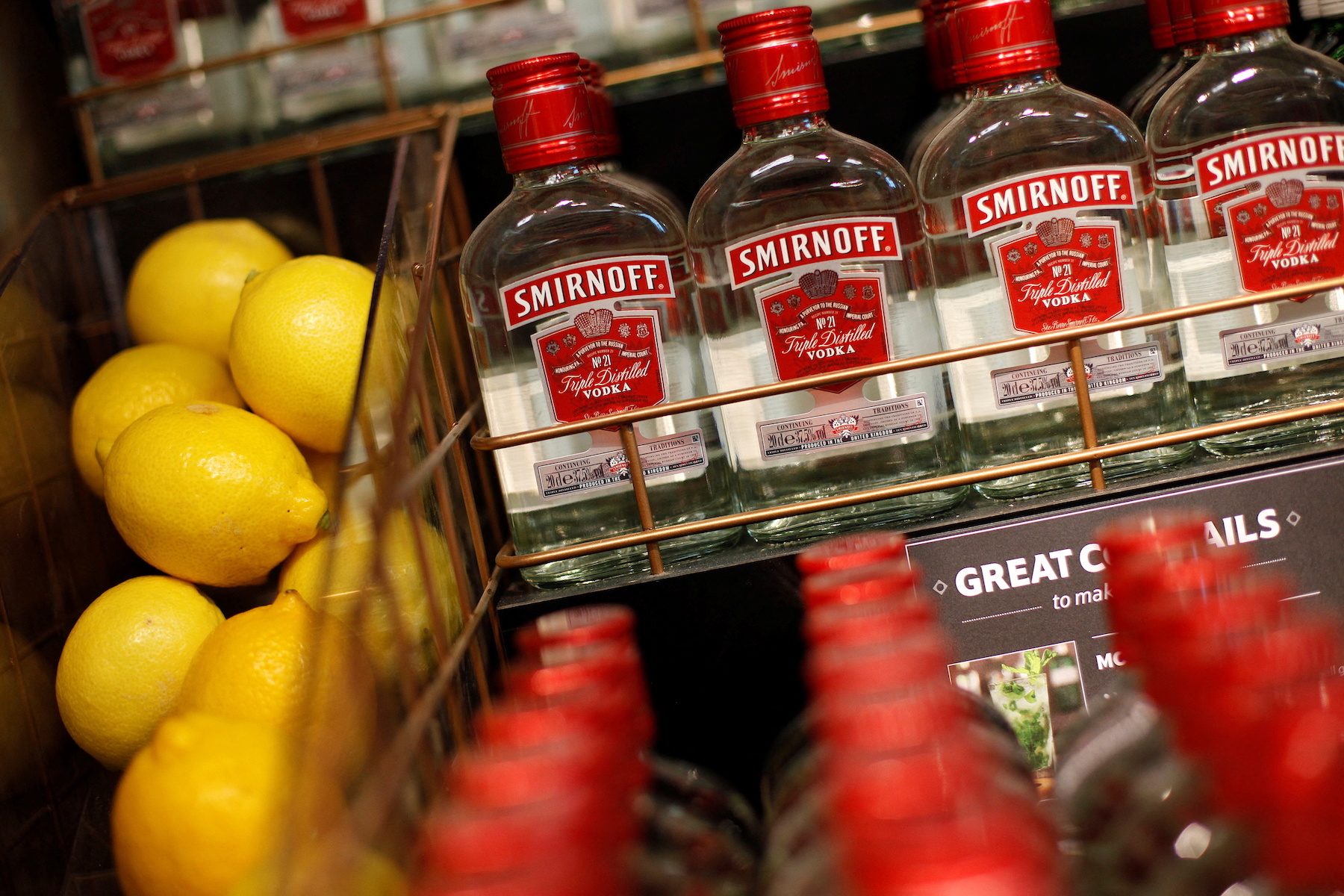 TESCO. Smirnoff vodka and lemons are displayed in the liquor aisle at a Tesco Extra supermarket in Watford, north of London, August 8, 2013.

Facebook Twitter Copy URL
Copied
Retailers including Tesco, Marks & Spencer, and Next perform better than expected in the final weeks of 2021, but they warn of pain to come

Retailers including Tesco, Marks & Spencer, and Next performed better than expected in the final weeks of 2021, as a surge in COVID-19 cases left pubs and restaurants deserted, and consumers crowding supermarket aisles for turkeys, champagne, and gin.

But they warned of pain to come as pressure built across their operations, from higher freight costs, wage hikes for warehouse workers, and more expensive raw materials.

Retailers also saw no immediate relief from supply-chain disruption, with the online fast-fashion retailer ASOS flying in more of its stock from Asia, at greater cost, to guarantee delivery for Christmas.

Britain’s most famous retailer M&S, a provider of food, clothes, and homewares, said it had largely held the line against price rises, but with inflationary pressures building in the pipeline that would have to give in 2022.

“We have to just try and make sure we get that balance and do what’s right for the consumer,” M&S finance chief Eoin Tonge told reporters.

He said inflation in the food market in the 12 weeks to December was 2.7%, rising to 3.5% in December, but M&S had not passed that much on to its shoppers.

British consumers have already seen food prices rise, with post-Brexit economic barriers pushing up the cost of trade, and hikes in taxes and energy bills are set for April. The Bank of England expects consumer price inflation to hit 6% in April, its highest since 1992, before easing.

Official economic surveys show household spending, which accounts for nearly two-thirds of the British economy, held up well to the end of December, but a lack of firepower in the spring will hit retailers hard when their costs remain high.

Britain’s biggest retailer Tesco said it was seeing operating cost inflation of about 5%, up from the normal levels of 2% to 3%.

“There’s no doubt that there are inflationary pressures, [it’s] very hard for us to predict what those are going to look like over the coming months but we’ll do our very best to manage them,” chief executive officer Ken Murphy told reporters.

Fast fashion groups have struggled as supply chain disruption limits their ability to deliver new ranges from factories in Asia to customers at speed. ASOS said it had already introduced low to mid-single digit price increases to offset the cost inflation.

That fitted with comments from Japanese clothing retailer Uniqlo which said it would raise some prices due to higher shipping and raw materials costs.

ASOS noted that despite the pressures it expected demand to hold up as it can offer lower prices than many rivals and some shoppers will not have spent on holidays or weddings for two years. The retailer added that factories producing spring-summer ranges were closer to home, unlike winter coats which come from China.

“I do think there is a lot more demand to run,” chief operating officer Mat Dunn told reporters. He said that freight costs, while high, had plateaued, and that recent wage rises for warehouse workers had helped in filling workforce gaps.

For Christmas, the supermarkets said the arrival of the Omicron variant of the coronavirus had prompted many Britons to stay at home once again.

While Tesco sold more than 8 million bottles of champagne and sparkling wine, pubs group Mitchells & Butlers said its sales fell 10.2% in the four weeks over Christmas compared with pre-pandemic trading.

M&S said it had sold one in four of the country’s fresh turkeys, along with more than 1 million light-up snow globe bottles of gin. Sales of Tesco’s Finest tempura prawns jumped 41%.