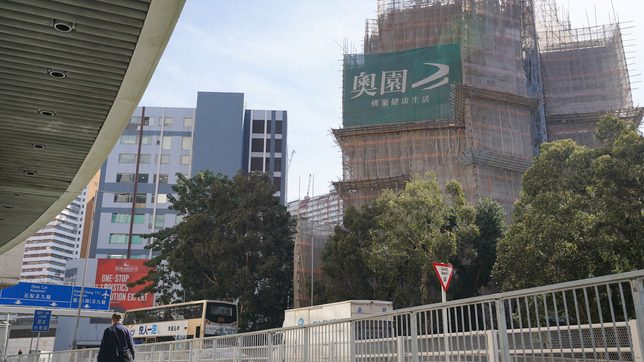 AOYUAN. A man walks near the construction site of an office building owned by Aoyuan Group, at Kwai Chung district in Hong Kong, November 27, 2021.

China Aoyuan Group said on Thursday, December 2, creditors have demanded repayment of $651.2 million due to a slew of rating downgrades, and the property developer warned shareholders that it may be unable to pay up due to a liquidity crunch.

Downgrades from rating agencies such as S&P, Fitch, and Moody’s over the last two months set off conditions under which certain offshore loans became immediately payable, the company said.

The downgrades were triggered as China’s property sector reels under a liquidity crisis that has fueled growing creditor concerns about developers’ ability to meet their near-term offshore repayment obligations.

Evergrande, once China’s top-selling developer, has been stumbling from debt deadline to deadline as it grapples with more than $300 billion in liabilities.

China Aoyuan said on Thursday there was no guarantee it would be able to fulfill its financial obligations due to the liquidity issues, and there may be “material” adverse impact on its business if it was unable to repay the loans or reach an agreement with creditors.

The company has not reached any agreements for the $651.2-million debt, and warned non-payment may cause acceleration of other loans where more creditors can demand repayment or enforce action.

The development comes as bigger peer Kaisa Group looks unlikely to win bondholders‘ approval to extend the maturity of a $400-million bond due next week. – Rappler.com