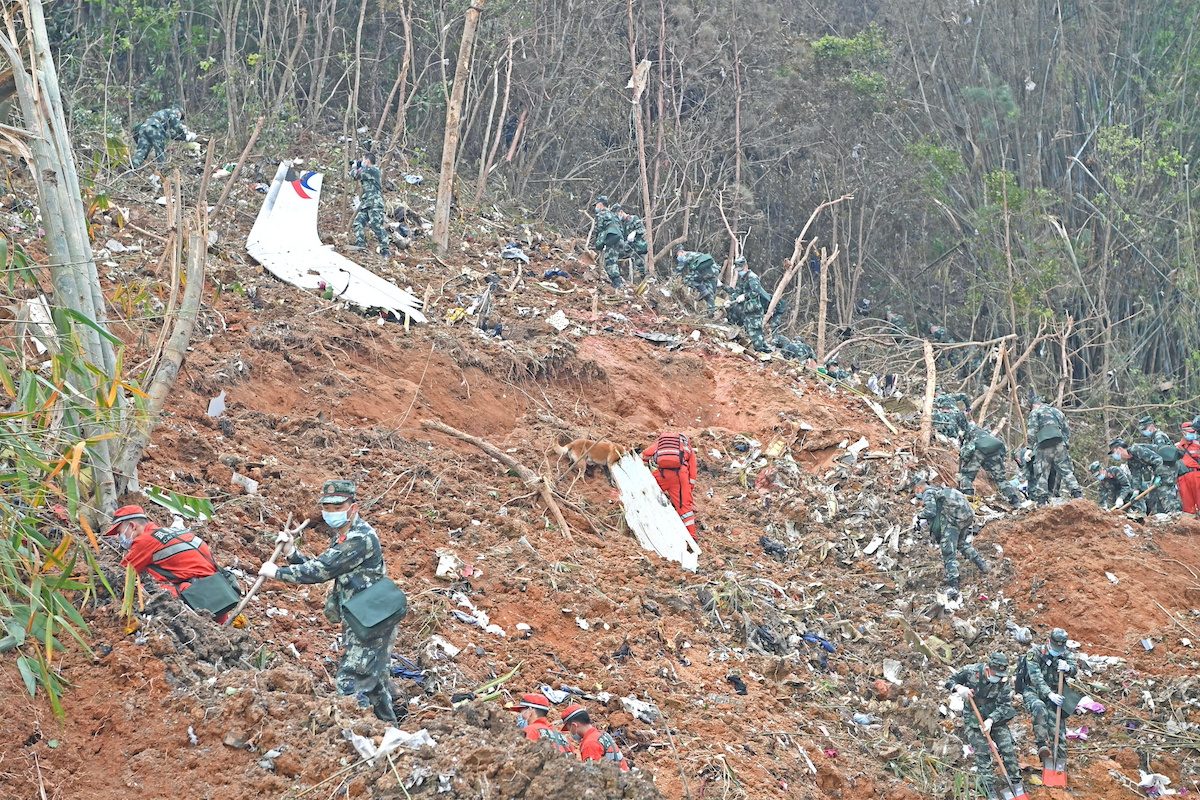 SHANGHAI, China – China Eastern Airlines faces deepening losses and closer regulatory scrutiny following the crash of a Boeing 737-800 jet on Monday, March 21, with 132 people on board.

Rescuers on Tuesday, March 22, scoured heavily forested slopes for survivors and data recorders from flight MU5735, which crashed a day earlier in the mountains of the southern region of Guangxi.

The plane crash, China’s first in 12 years, comes as its airline sector is struggling to find its footing amid the coronavirus pandemic, with air passenger traffic far below 2019 levels due to repeated outbreaks and a steep fall in international travel due to China’s strict quarantine rules.

Its losses are set to deepen after the group, including two subsidiaries, grounded its fleet of 737-800s following Monday’s crash. The group has 225 of the aircraft, data from British aviation consultancy IBA shows.

The airline canceled about 89% of its flights on Tuesday, according to Chinese aviation data provider Flight Master.

“My guess is that in the short term this is going to cause some issues for China Eastern as their maintenance records are reviewed, and there will likely be a short-term pullback from Chinese consumers,” said Ben Cavender, managing director at China Market Research Group in Shanghai.

Cheng Wang, associate equity analyst at Morningstar, said one of the big risks for China Eastern was if the investigation implies maintenance or other process shortfalls.

“We think most of the impact will be in the near term. The indemnity alone will not have a material impact on our fair value estimates. The potential regulatory actions including fines, additional security requirements, or even grounding of aircraft could make a bigger difference.”

“This crash might also have mid- to long-term implications for China Eastern as the airline could be in an unfavorable position when applying for routes and slots over the next few years if it is found to be at fault.”

China Eastern, which said on Monday it was cooperating with the investigation into the crash, did not immediately respond to requests for comment.

Its onshore-listed shares slumped more than 6.5% on Tuesday, while those trading in Hong Kong fell nearly 6%.

The tragedy has shocked a country which has one of the best airline safety records in the world and whose aviation industry was over the past decade, prior to COVID-19, one of the world’s fastest growing markets by passenger traffic.

Several social media users posted about how it had stoked their fears of flying and some wrote about changing their travel plans, especially after photos of the plane’s wreckage and videos apparently showing its descent were shared widely online.

One Weibo user, PLILY-L, said she had planned to travel on a later flight on the same route taken by flight MU5735 from Kunming, capital of the southwestern province of Yunnan, to the port city of Guangzhou before she heard about the incident.

“I was really scared, I immediately canceled my flight ticket and switched to taking the high-speed rail,” she wrote.

Local media reported long queues at the counter of China Eastern at Guangzhou Baiyun airport, saying some travelers were seeking ticket refunds after the incident.

Across the industry, around 78.4% of all flights scheduled for Tuesday were canceled, according to Flight Master, which attributed that to COVID-19, as China deals with its largest outbreak in two years.

Some of the fears expressed online about flying were directed towards Boeing, whose brand had already been affected in China by two fatal crashes of its 737 MAX aircraft more than three years ago.

Boeing declined to comment and referred Reuters to the statement it released on Monday, when it said it was ready to assist China Eastern and was in contact with US transportation safety regulators about the crash.

Elaine Shen, a Shanghai-based insurance professional who describes herself as a big fan of China Eastern, said she would stick with the airline but would now only fly on planes made by Boeing’s rival Airbus.