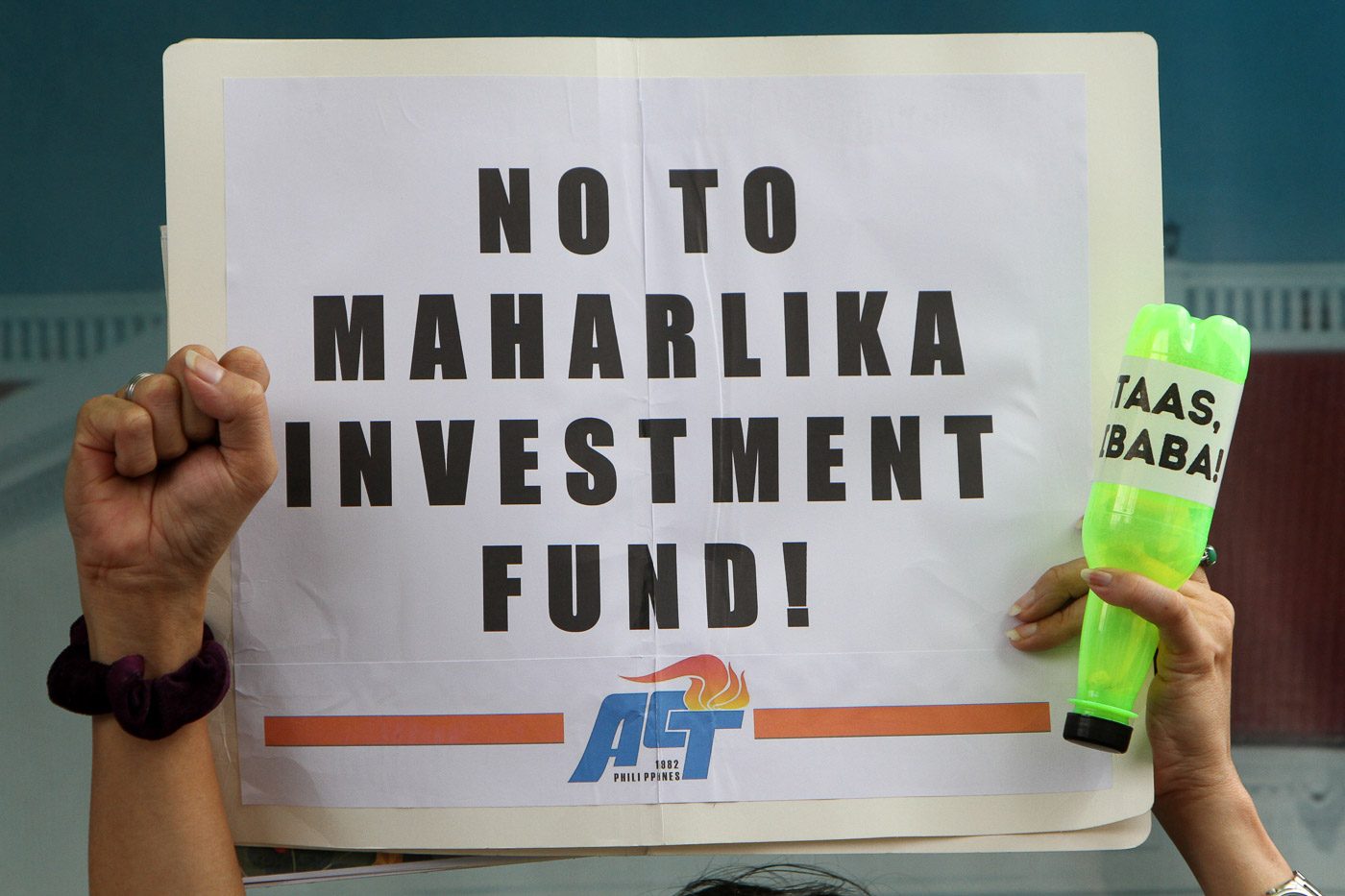 PROTEST. Public school teachers under the Manila Public School Teachers Association and the Alliance of Concerned Teachers stage a Christmas-themed protest in Mendiola, Manila, to oppose the Maharlika Wealth Fund.

However, experts worried that this arrangement may interfere with the BSP’s independence and make it more difficult for the central bank to do its job.

A joint statement by the economic think tank Action for Economic Reforms (AER) said that remitting the annual dividends to the Maharlika fund deprives the BSP of using its dividends “as equity infusion, undermining its independence and ability to stabilize prices and the exchange rate.”

“This muddled, inconsistent, and redundant bill is only setting the [MIF] up for failure and will only enable cronyism, rent seeking, and corruption,” the statement added.

In an interview with BusinessMirror, AER executive director Filomeno Santa Ana III explained that since “BSP dividends usually go to the national government, allocating these dividends towards the [MIF] would mean a huge opportunity cost for our national government agencies and our annual appropriations.” Enrico Villanueva, a senior lecturer of economics at the University of the Philippines Los Baños, also disagreed with the use of BSP’s dividends for the Maharlika fund.

“On the contribution of BSP, Congress can demonstrate to potential investors the consistency of Philippine law by implementing first its legislated capital build-up for BSP,” he told Rappler.

“Let the BSP dividends be used for this capital build-up first before the national government allots it for other purposes like an investment fund.”

When pressed on how the Maharlika fund proposal would impact the BSP’s independence, Finance Secretary Benjamin Diokno insisted that it would not be affected.

“The other sign that it’s independent is we don’t submit our budget to Congress. We have our own budget and we don’t have to answer questions from Congress on our budget,” Diokno added. “That’s independence. Hindi ibig sabihin na nag-invest ang BSP sa wealth fund na ito ay hindi na sila independent (Just because the BSP invested in a wealth fund doesn’t mean it’s no longer independent).”

BSP to join Maharlika’s board

However, Villanueva disagreed with having the BSP involved with the fund at all as it would go beyond the central bank’s stated purpose.

“I’d personally prefer that BSP is out of this altogether, not even sitting as part of the board. Development financing is not part of its mandate, prohibited even as stated in its charter. I would rather see BSP regulating the investment fund the way they audit asset management and trust corporations,” he said.

Villanueva also believed that the current board composition will not insulate the MIC from political maneuvering.

“Since the finance secretary serves at the pleasure of the President, there is effectively no difference between him and the President sitting as chairman of the board,” he said.

“It does not help that the current finance secretary undermined the independence of BSP by suggesting that the gross international reserves be used. It sends the message that functional boundaries are not being respected and that the BSP is at the mercy and control of the fiscal government.”

Zy-za Suzara, the executive director of Institute for Leadership, Empowerment, and Democracy, echoed the sentiments of Villanueva on safeguarding the fund from political interference.

“Lawmakers should also think twice about the proposed governing body of the Maharlika entity. The finance secretary ultimately reports to the President. How sure are we that, given the proposed exemptions and governance mechanism, the new entity will be insulated from politics?” Suzara said.

One way to address this would be for the sovereign wealth fund (SWF) to include a more diverse board of elected representatives.

“If we are to start a SWF fund properly from our surplus funds or from fees from extraction and utilization of our natural resources, I would make the board composed not by political appointees but by elected representatives chosen from nominees from the business sector, labor sector, government, finance industry, youth, academe and religious sector,” Villanueva said.

Reading a joint statement on December 9, Diokno said: “The creation of the MWF will help us achieve our Agenda for Prosperity and the objectives for inclusive and sustainable economic growth we have outlined in our Medium-Term Fiscal Framework, 8-point socioeconomic agenda, and in the Philippine Development Plan 2023-2028.” “They will be able to ensure the availability of an alternative high return investment platform, obtain the best absolute return for the funds, find additional sources of liquidity as the need arises, and perform better risk management, given additional layers of checks and balances in the use of investible funds,” the statement said regarding its prospective fund managers.

Although Medalla is among the statement’s current signatories, he previously expressed concern regarding the fund’s management.

“To me, the experience of 1MDB of Malaysia is the biggest risk. Even if the current guys are okay, will the guys five years from now still be okay? It’s a governance issue,” Medalla said in a Bloomberg TV interview. – Rappler.com