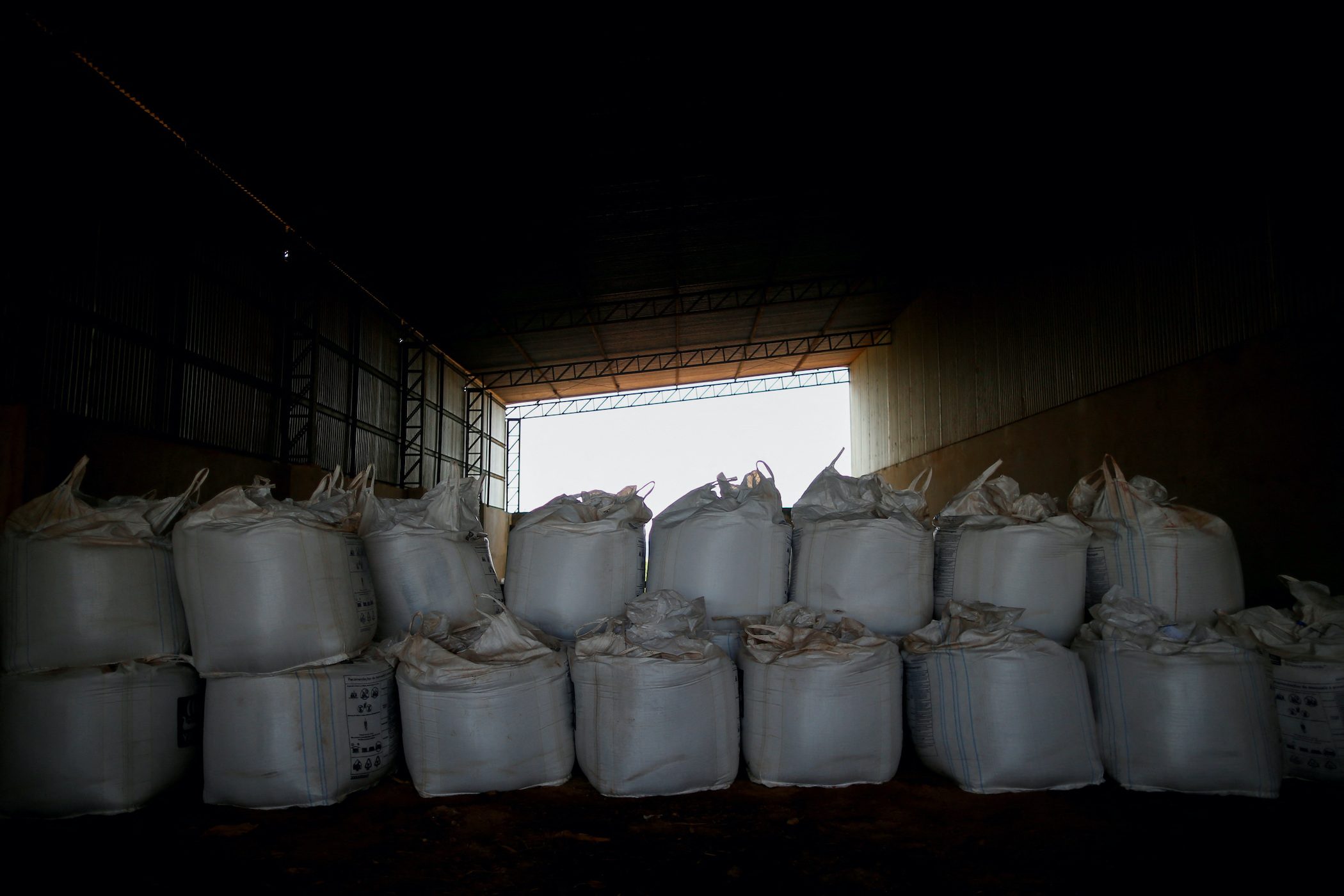 FERTILIZER. General view of a warehouse with fertilizer bags for a soybean field, near Brasilia, Brazil, February 15, 2022.

Facebook Twitter Copy URL
Copied
The United Nations proposes that ammonia gas owned by Russian fertilizer producer Uralchem be pumped by pipeline to the Ukrainian border, where it would be bought by US-based commodities trader Trammo

MOSCOW, Russia – A United Nations proposal that Russia resume exporting ammonia via Ukraine has raised hopes that a global shortage of fertilizer could be eased, and in turn alleviate world food shortages exacerbated by the conflict in Ukraine.

The United Nations proposed that ammonia gas owned by Russian fertilizer producer Uralchem be pumped by pipeline to the Ukrainian border, where it would be bought by US-based commodities trader Trammo.

The pipeline is designed to pump up to 2.5 million metric tons of ammonia per year from Russia’s Volga region to Ukraine’s Black Sea port of Pivdennyi, known as Yuzhny in Russian, near Odesa. It was shut down after Russia sent its troops into Ukraine on February 24.

Part of the pipeline runs through the Mykolaiv region in Ukraine where there is regular shelling, though it has to date avoided any damage.

“Not a single piece of shrapnel has gone into the pipeline so far,” said a Russian source close to the talks.

Ammonia is a key ingredient in the manufacture of nitrate fertilizer, which farmers including wheat producers need when they sow crops in autumn and spring, for good yields and protein content.

A steep rise in European gas prices has triggered a global shortage of nitrogen fertilizer. The Russian fertilizer industry estimates that up to 70% of European ammonia plants have suspended or reduced production.

Farmers in France are currently 20 percentage points behind the level of fertilizer cover seen a year ago, and concerned about 2023 crops.

Western sanctions imposed on Moscow since February 24 have not directly targeted fertilizer exports, but Russian producers lost access to the Baltic Sea ports that they had used, along with the pipeline, to ship their ammonia.

Uralchem is considering building an export terminal for ammonia in Russia’s Black Sea port of Taman, but this would take more than a year.

The Russian ammonia used to go mainly to fertilizer producers in Morocco, Turkey, Southeast Asia, and Africa, whose output the United Nations is keen to restore to help ease the global food crisis.

Ammonia is part of a UN-brokered deal that Ukraine, Russia, and Turkey signed in July to reestablish grain exports from Ukraine’s Black Sea ports that Russia had blockaded. However, the pipeline was not publicly mentioned until this week.

Moscow’s agreement is needed for the deal to be extended beyond late November, giving it a lever to ensure it can export ammonia.

UN Secretary-General Antonio Guterres said on Wednesday, September 14, after a call with Russian President Vladimir Putin, that it was “absolutely essential” that obstacles to the export of Russian fertilizer were overcome.

“There is no solution to the global food crisis without ensuring full global access to Ukraine’s food products and Russian food and fertilizers,” he told reporters in Lviv last month.

Putin complained about the deal last week, saying Russian fertilizer exports were still being hindered. He is due to discuss the agreement with Turkish President Tayyip Erdogan on Friday, September 16. – Rappler.com