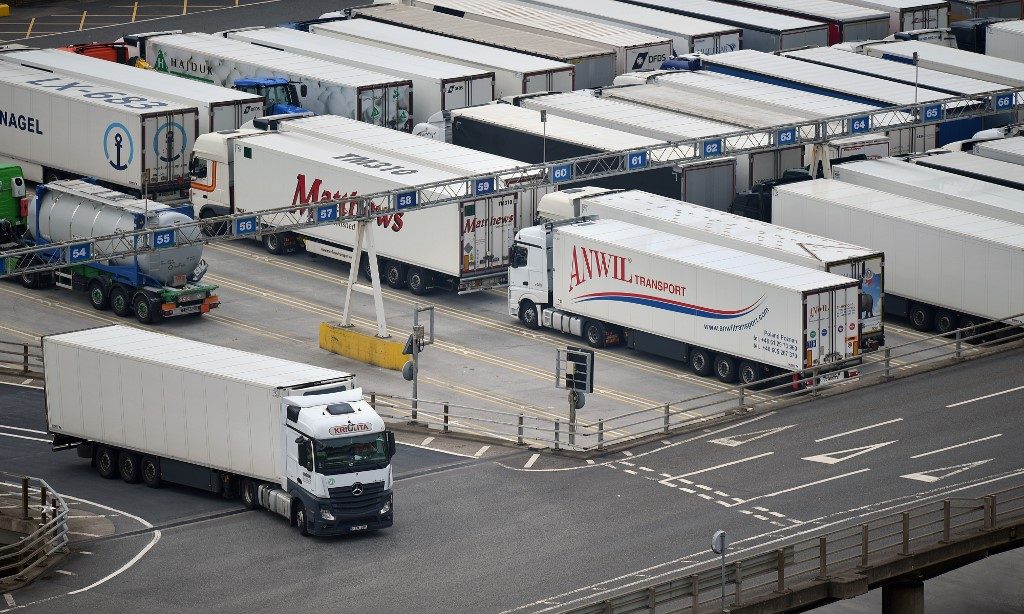 In this file photo taken on June 12, 2020, a freight truck (L) prepares to leave the Port of Dover after disembarking from a cross-channel ferry, in Dover on the south coast of England. - From government IT systems to portable toilets for queuing drivers, the UK's logistics industry is still in the dark about crucial post-Brexit arrangements as the clock ticks down to a possible "no deal", representatives warned on October 14, 2020. Hauliers, exporters, logistics agents and ports are still clamouring for details from the government, including on an IT system for EU-bound lorry drivers that is still being tested, and a new system of permits for trucks to enter Kent. (Photo by Ben STANSALL / AFP)

Facebook Twitter Copy URL
Copied
Deal or no deal, British businesses need to be ready for change. Firms say, however, that they are still in the dark on crucial fronts.

Hammered by the coronavirus pandemic, United Kingdom businesses face a double whammy from Brexit and are furious at the government for insisting the onus lies on them to get ready for life outside the European Union (EU).

With just over two months to go before a post-Brexit transition period ends, the government is locked in a standoff with the 27-nation EU over a future trade pact.

But deal or no deal, businesses need to be ready for change. They were hardly reassured by a call with Prime Minister Boris Johnson on Tuesday, October 20, which industry leaders said fell woefully short of offering the kind of detail they need to manage their operations.

Senior minister Michael Gove joined Johnson on the conference call with 250 business leaders and reportedly told them that Brexit was like moving house – hassle at first, but worth it in the end to live somewhere nicer.

That went down “like a bucket of cold sick,” according to one participant cited in the Financial Times. The BBC quoted others as saying the call was “terrible” and “unbelievably disrespectful to concerns of business.”

UK firms say they are still in the dark on crucial fronts. A government computer system for EU-bound trucks is still in the testing stage. Information about everything from customs paperwork to supplier relationships across the Channel is scant.

A trade deal would lift much of the doubt, but companies will still need to wade through reams of new red tape to ensure their goods comply with EU standards.

The biggest companies have been signing up intermediary agents to handle the paperwork, but many smaller ones are at sea, despite a new government information campaign warning them that “time is running out.”

The Federation of Small Businesses took part in Tuesday’s call, and welcomed one commitment by Gove to look into the possibility of offering grants to help firms buy new equipment or procure services to help them navigate Brexit.

“My own view is that, despite small businesses making up 99% of the business population, hardly anyone in government has any commercial experience – and when they do talk to businesses, it’s usually lobbyists of [multinational] FTSE 250 firms,” he told Agence France-Presse.

“It’s all very well government trying to put the onus on small businesses to assume the crash position for a no-deal Brexit.

“But when 60% of small businesses are one-man-band sole traders, they do not have the bandwidth to cope with any Brexit turbulence. They’re too busy trying to keep their heads above water during COVID.”

Instead of any detailed planning, participants complained that Johnson stuck to platitudes as he spelled out the alternatives of clinching a Canada-style free trade pact with the EU, or reverting to basic World Trade Organization tariffs and quotas.

“There is a big opportunity for this country and we want to help all of you to seize that opportunity,” the prime minister said, according to his office.

Deflecting the criticism, Johnson’s spokesman told reporters on Wednesday, October 21, that the call “was a useful opportunity to speak direct to business.”

Some 20,000 customs agents have applied to join government training courses on Brexit paperwork, he said, adding: “The view is we are on track to have the right people in place with the right skills by the end of the transition period.”

But the agents are in high demand, and even top-tier companies complain they lack the expertise to navigate the minefield from January 1, when Britain will be free of EU structures.

A YouGov online poll of 1,000 businesses this week said that two-thirds of firms feel the government has done a poor job of communicating its plans for post-Brexit trade.

And more than half of UK companies fear the COVID-19 pandemic will magnify the negative impact of a no-deal Brexit on their business, according to another survey by the Institute of Directors (IoD).

“The prospect of no deal would be daunting enough, let alone dealing with it in the middle of a global pandemic,” said Allie Renison, senior policy advisor at the IoD. – Rappler.com