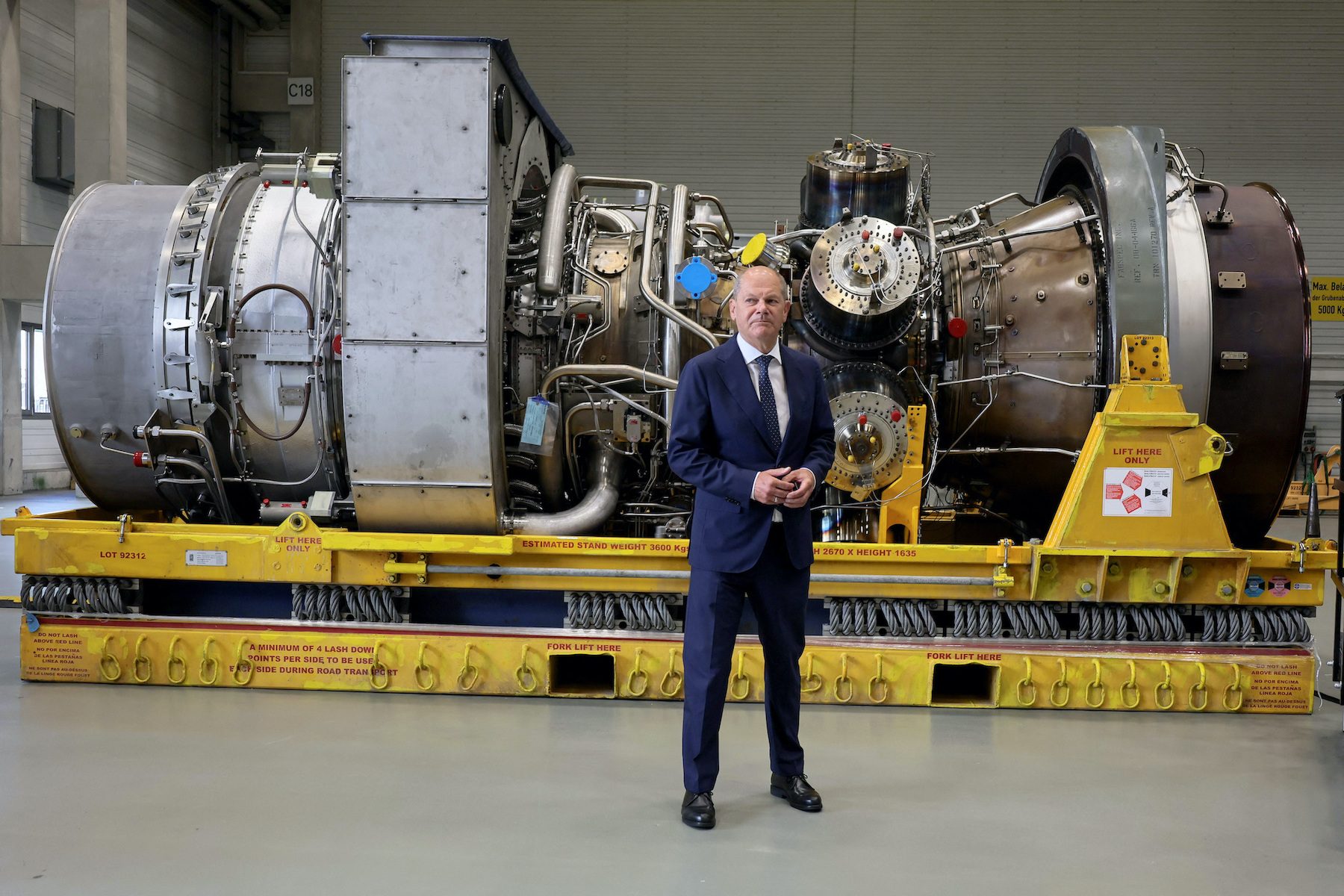 GAS TURBINE. German Chancellor OIaf Scholz stands next to a gas turbine meant to be transported to the compressor station of the Nord Stream 1 gas pipeline in Russia during his visit to Siemens Energy's site in Muelheim an der Ruhr, Germany, August 3, 2022.

Facebook Twitter Copy URL
Copied
German Chancellor Olaf Scholz visits the factory of Siemens Energy in Muelheim an der Ruhr, saying he wants to show the world that the gas turbine being questioned by Russia works

MUELHEIM AN DER RUHR, Germany – German Chancellor Olaf Scholz on Wednesday, August 3, said Russia had no reason to hold up the return of a gas turbine for the Nord Stream 1 pipeline that had been serviced in Canada but has since been stranded in Germany in an escalating energy standoff.

Standing next to the turbine on a factory visit to Siemens Energy in Muelheim an der Ruhr, Scholz said it was fully operational and could be shipped back to Russia at any time – provided Moscow was willing to take it back.

The fate of the 12-meter (13-yard) long turbine has been closely watched as European governments accused Russia of throttling gas supplies on spurious pretexts in revenge for Western sanctions after the invasion of Ukraine in February.

Moscow denies doing so and cited issues with the turbine as the reason for lower gas flows through Nord Stream 1, which have been cut to 20% of capacity.

Kremlin spokesman Dmitry Peskov pushed back against Scholz’s remarks on Wednesday, blaming a lack of documentation for holding up the turbine’s return to Russia.

He also dangled the prospect of Europe receiving gas through the Nord Stream 2 pipeline, a Moscow-led project that was blocked by the West as Russia sent troops into Ukraine.

The turbine’s movements had been shrouded in secrecy and its whereabouts unknown until Tuesday evening, August 2, when the chancellor’s visit to Siemens Energy was announced.

“The turbine works,” Scholz said, telling reporters that the point of his visit was to show the world that the turbine worked and “there was nothing mystical to observe here.”

“It’s quite clear and simple: the turbine is there and can be delivered, but someone needs to say ‘I want to have it.’”

For Canadian Foreign Minister Melanie Joly, whose government has faced criticism for returning the turbine in violation of its own sanctions, the present impasse was worth it as an illustration of the Kremlin’s purpose.

“We called his bluff,” she said at a meeting with her German counterpart Annalena Baerbock in Montreal. “It is now clear that Putin is weaponizing energy flows through Europe.”

Even if Russia took back the turbine, Scholz warned that Germany could face more disruptions further down the line and that supply contracts might not be honored.

He also said it “can make sense” for Germany to keep its three remaining nuclear power plants running beyond a planned shutdown at the end of 2022, a policy U-turn that has gained support given the risk of a total Russian gas cut-off in winter.

A senior manager at Kremlin-controlled Gazprom has said the delivery of the turbine after servicing was not in line with the contract and that it had been sent to Germany without Russia’s consent.

Standing next to Scholz, Siemens Energy chief executive officer Christian Bruch confirmed that there were ongoing talks with Gazprom, “but no agreement.”

After being forced to bail out the utility Uniper when it became an early casualty of the gas crisis, Scholz’s government will have to amend newly introduced energy reforms, sources told Reuters on Wednesday.

Scholz has called for Germans to steel themselves for rising bills and his government has urged them to make energy savings wherever possible, such as taking shorter showers.

But he chose not to address questions about his Social Democrat predecessor, former chancellor Gerhard Schroeder, who has become increasingly derided in Germany for his pro-Russian views and friendship with President Vladimir Putin.

Schroeder said Russia was ready for a negotiated settlement to end the war in an interview published on Wednesday, after traveling to Russia to meet Putin last week.

Putin told Schroeder that Nord Stream 2 could provide 27 billion cubic meters of gas to Europe by the end of the year if allowed to operate, Peskov said.

“Putin explained everything in detail, and the former chancellor asked if it was possible to use Nord Stream 2 in a critical situation,” Peskov said. “Putin was not the initiator, Putin did not offer to turn it on, but Putin said that it is technologically possible, and this complex mechanism is ready for instant use.”

Scholz signaled that Nord Stream 2 would not be used as an alternative. “We have terminated the approval process, for good reason,” Scholz said. “There is sufficient capacity at Nord Stream 1, there is no lack.” – Rappler.com