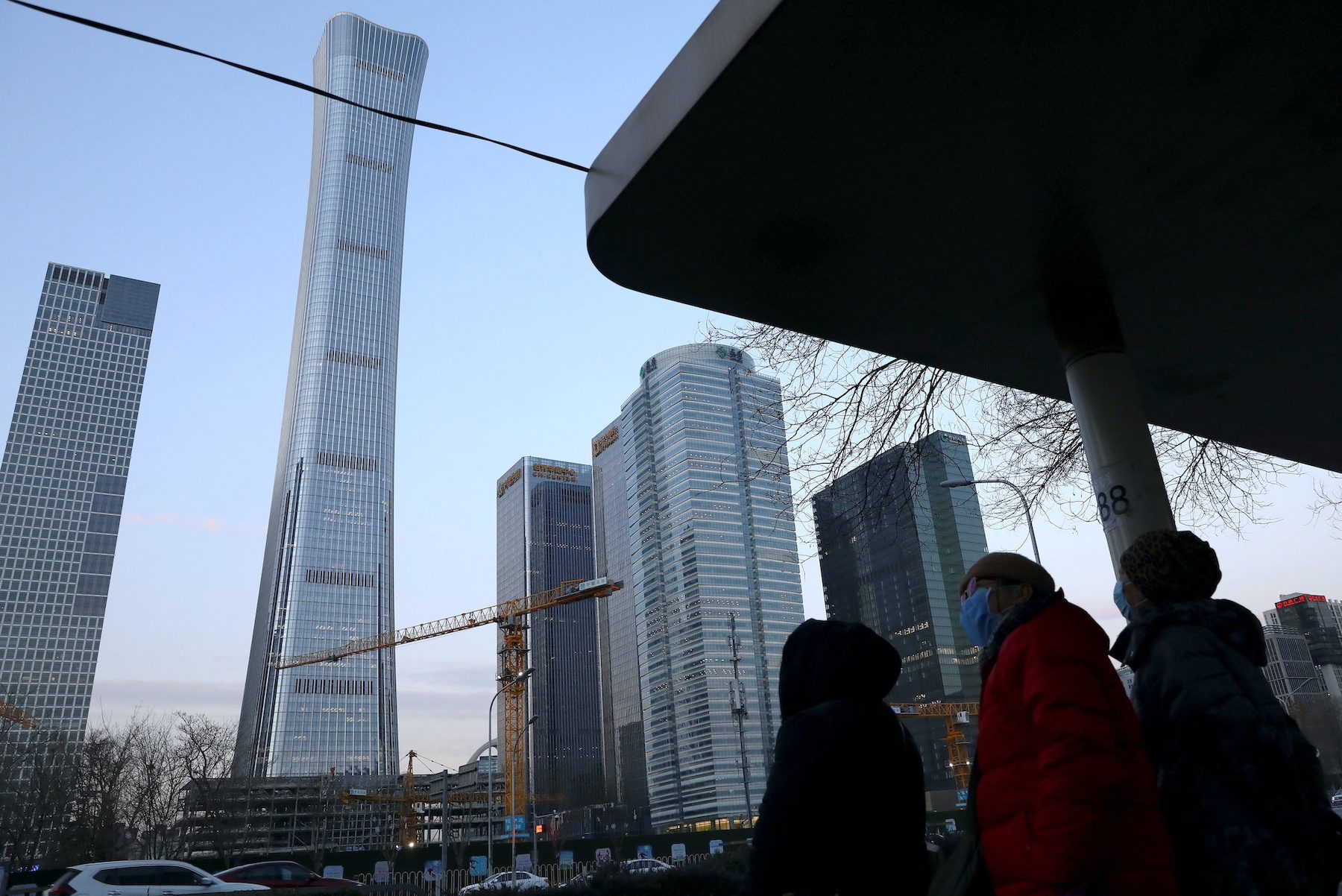 Facebook Twitter Copy URL
Copied
China's gross domestic product expands by 4.8% in the first quarter of 2022. Some see rising recession risks, however, due to COVID-19 lockdowns.

The biggest near-term challenge for Beijing is the tough new coronavirus rules at a time of heightened geopolitical risks, which have intensified supply and commodity cost pressures, leaving Chinese authorities walking a tight rope as they try to stimulate growth without endangering price stability.

Gross domestic product (GDP) expanded by 4.8% in the first quarter from a year earlier, data from the National Bureau of Statistics (NBS) showed on Monday, April 18, beating analysts’ expectations for a 4.4% gain and picking up from 4% in the fourth quarter.

A surprisingly strong start in the first two months of the year improved the headline figures, with GDP up 1.3% in January-March in quarter-on-quarter terms, compared with expectations for a 0.6% rise and a revised 1.5% gain in the previous quarter.

Analysts say April data will likely be worse, with lockdowns in commercial center Shanghai and elsewhere dragging on, prompting some to warn of rising recession risks.

“Further impacts from lockdowns are imminent, not only because there has been a delay in the delivery of daily necessities, but also because they add uncertainty to services and factory operations that have already impacted the labor market,” said Iris Pang, Greater China chief economist at ING.

“We may need to revise our GDP forecasts further if fiscal support does not come in time.”

China’s shares fell, likely reacting to the March numbers and a weak outlook – the blue chips CSI300 index was down 0.6% while the Shanghai Composite Index dropped 0.5%.

Data on March activity showed retail sales contracting the most on an annual basis since April 2020 on widespread COVID-19 curbs across the country. They fell 3.5%, worse than expectations for a 1.6% decrease and an increase of 6.7% in January-February.

The job market is already showing signs of stress in March, a usually robust month for the labor market as factories resume hiring after the Lunar New Year holiday. China’s nationwide survey-based jobless rate stood at 5.8% in March, the highest since May 2020, while that in 31 major cities hit a record 6%.

The industrial sector held up better with production expanding 5% from a year earlier, compared with forecasts for a 4.5% gain. That was still down from a 7.5% increase seen in the first two months of the year.

Fixed asset investment, a driver of growth that Beijing is counting on to underpin the economy, increased 9.3% year-on-year in the first quarter, compared with an expected 8.5% increase but down from 12.2% growth in the first two months.

Analysts at Capital Economics and Nomura believe the official GDP figures may have understated the slowdown last quarter.

Capital Economics says growth in services production index for Q1 does not align with the expansion of the services sector in the GDP data, while Nomura said some of the March data, such as industrial production, are hard to reconcile with many other indicators of industrial activity.

Home sales by value in March slumped 26.2% year-on-year, the biggest drop since January-February 2020, according to Reuters calculations, pointing to a deepening downturn in the property market.

The government’s determination to stop the spread of record COVID-19 cases has clogged highways and ports, stranded workers, and shut countless factories – disruptions that are rippling through global supply chains for goods ranging from electric vehicles to iPhones.

The contribution from net exports to GDP growth fell to 3.7% in the first quarter from 26.4% in the fourth as momentum ebbed.

“We will step up the implementation of macro policies, make every effort to stabilize the economic fundamentals, and strive to achieve the targets and tasks for the year,” Fu told a news conference.

The People’s Bank of China (PBOC) said on Monday it would step up support for industries, firms, and people hit by COVID-19 in its latest move to cushion them from the impact of economic slowdown.

Late on Friday, April 15, the PBOC said it would cut the amount of cash that banks must hold as reserves for the first time this year, releasing about 530 billion yuan ($83.25 billion) in long-term liquidity, although the reduction missed expectations.

Analysts see less room for more China rate cuts, after the smaller-than-expected reserve requirement ratio reduction, which they say reflected the PBOC’s concern about inflation and US monetary tightening.

“The government faces a dilemma: how to balance economic growth and containing the outbreaks. Locking down large cities like Shanghai is highly costly,” said Zhiwei Zhang, chief economist at Pinpoint Asset Management.

“Such costs will become more visible in coming months.” – Rappler.com