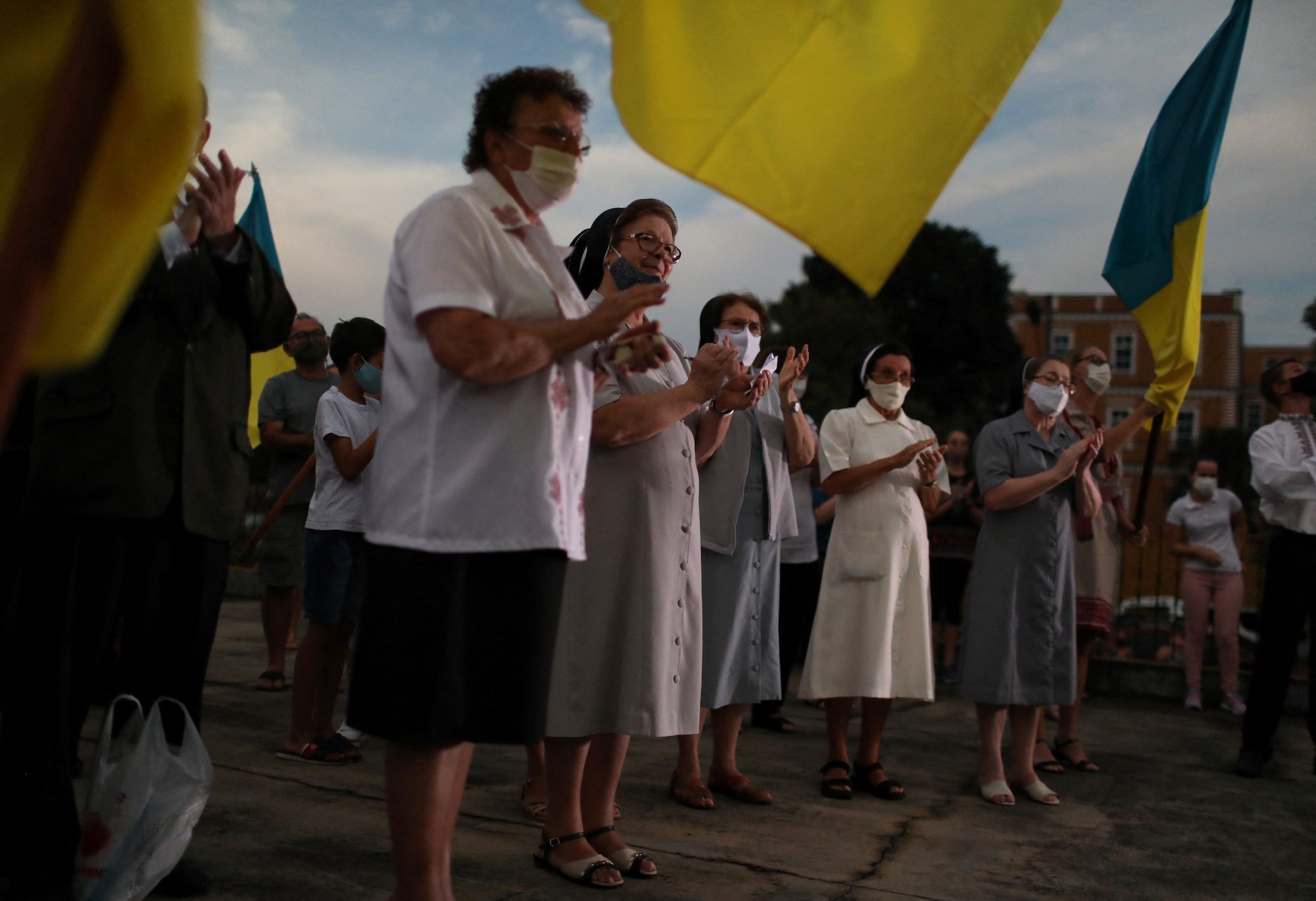 SUPPORT FOR UKRAINE. Descendants of Ukrainian immigrants, who are part of the largest Ukrainian community in Latin America, take part in a demonstration in support of Ukraine, in Prudentopolis, Parana state, Brazil, February 24, 2022.

Facebook Twitter Copy URL
Copied
With inflation-adjusted income falling and the global economy decelerating, Latin America faces a similar backdrop as it did in 2018-2019, when citizens took to the streets

NEW YORK, USA – The poorest will be the hardest hit across Latin America and the Caribbean by the economic fallout from Russia’s invasion of Ukraine, with the region facing further inflationary pressure, a senior official at the International Monetary Fund (IMF) said on Wednesday, March 16.

“High inflation, especially food inflation, affects the poor in our region the most. So that’s the main challenge that the region will face,” Ilan Goldfajn, the head of the IMF’s Western Hemisphere Department, told Reuters.

The cost of US crude oil jumped to its highest level since 2008 earlier this month, while the price of wheat, for which Ukraine and Russia account for 30% of global exports, reached a record high.

The current spike in wheat prices was triggered by Russia’s invasion of Ukraine and the sanctions on Moscow and trade disruptions that followed. The World Bank said a number of developing countries face near-term wheat supply shortages due to their dependence on Ukrainian exports.

Russia was the top wheat exporter in 2018 and Ukraine the fifth largest, according to World Bank data.

“You’re having an inflation of food and energy on top of a high inflation legacy of the previous [COVID-19-related] shock,” Goldfajn said.

The supply chain bottlenecks linked to the pandemic had already sent Latin America on a monetary-tightening path, with all the major central banks raising interest rates, both to fight inflation and protect against an expected outflow of capital chasing returns in developed countries.

“We expect that given the main channel [of economic transmission] of the conflict is inflation in energy and food, central banks will end up having to react and further defend their credibility,” Goldfajn said, adding that so far inflation expectations in the region remain anchored.

A further ratcheting up of borrowing costs, the income-corrosive effects of inflation, and a slowing global economy could undermine growth in the region, said Goldfajn.

With inflation-adjusted income falling and the global economy decelerating, Latin America faces a similar backdrop as it did in 2018-2019, when citizens took to the streets in protests that only stopped when pandemic lockdowns were imposed in 2020.

“Governments should continue strengthening the well-targeted social safety nets, trying to expand them and expand the coverage and reach,” Goldfajn said.

More social spending might be a tall order for governments facing higher borrowing costs and stretched fiscal positions after two years of lockdowns, especially in many countries in the Caribbean and Central America, where commodities are mostly imported.

For some other nations in South America, the increase in commodity prices could be a macroeconomic lifeline, even as consumers get hit.

As the region’s largest grains exporters, Argentina and Brazil could benefit, while Colombia could take advantage of its oil exports. Chile’s mining capacity should also be a tailwind.

“The human suffering in the conflict and the negative global shock does not benefit anybody,” said Goldfajn.

“When you look at South America, [they] export commodities that are exactly the ones that are being affected globally, so you do have mitigating factors. But you need to be able to seize the opportunity.” – Rappler.com