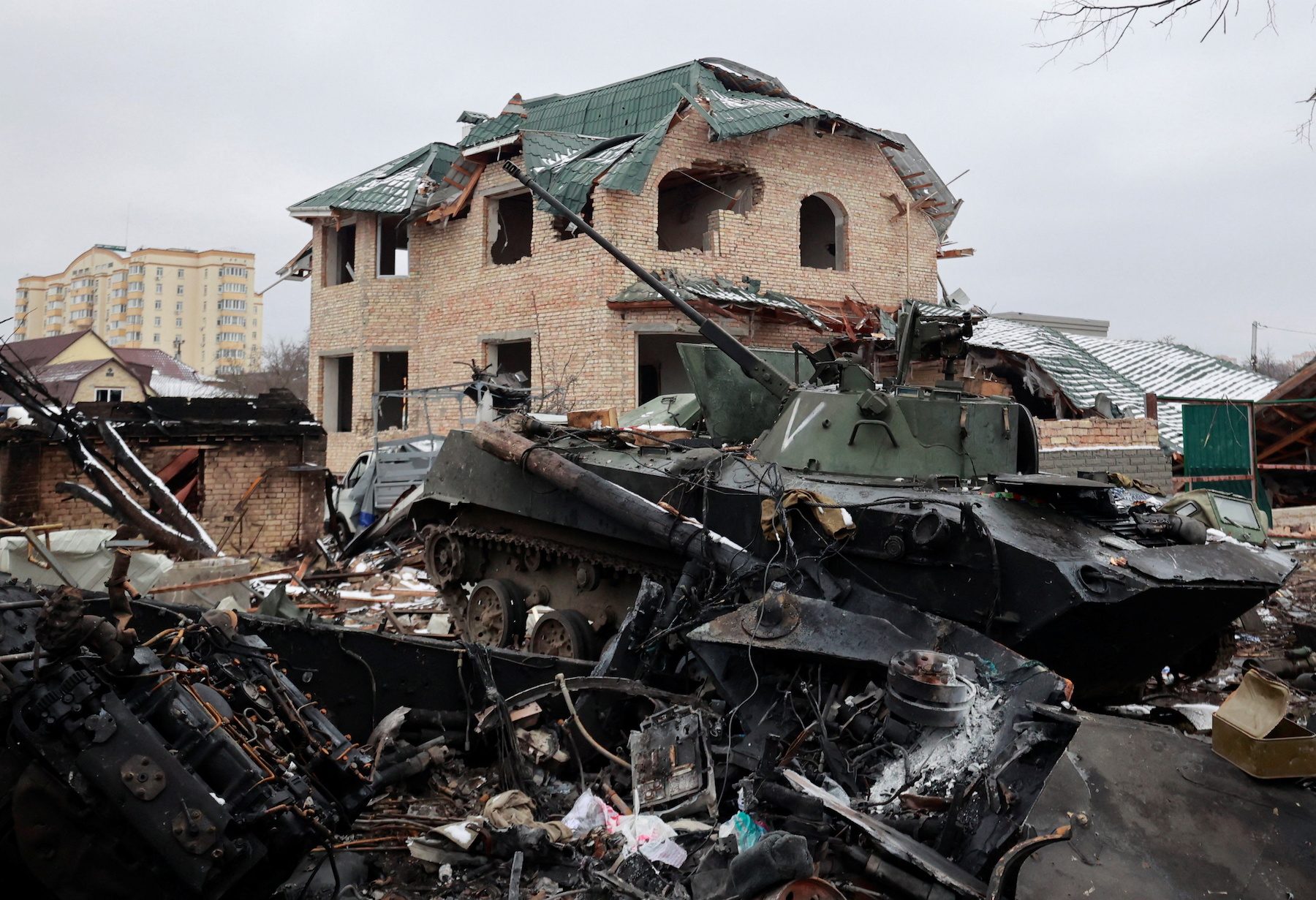 AFTERMATH. A destroyed armored vehicle, with the letter 'V' painted on its turret, is seen on a street in the town of Bucha in the Kyiv region, Ukraine, March 1, 2022.

The global lender said Ukrainian authorities had canceled an existing standby lending arrangement with the IMF, but would work with the fund to design an appropriate economic program focused on rehabilitation and growth when conditions permit.

“The Russian military invasion of Ukraine has been responsible for a massive humanitarian and economic crisis,” IMF Managing Director Kristalina Georgieva said in a statement after the meeting, predicting a deep recession in Ukraine this year.

“Financing needs are large, urgent, and could rise significantly as the war continues,” she said. Once the war was over, Ukraine was likely to need additional “large support.”

Vladyslav Rashkovan, Ukraine’s alternate executive director at the fund, gave an emotional and deeply personal speech at the board meeting about the devastation caused by the war and its impact on its people, a source familiar with the meeting said.

His remarks were met with spontaneous applause, a rare event at such meetings. In its statement on the new funding, the board also expressed its “strong support for the Ukrainian people.”

Russian Executive Director Aleksei Mozhin, who is the board’s most senior member and serves as its honorary dean, spoke only briefly, telling board members, “I pray for peace,” the source said.

The IMF said the war had already resulted in very serious consequences, citing the flight of over 2 million people from the country in 13 days and large-scale destruction of key infrastructure.

The disbursement under the IMF’s Rapid Financing Instrument (RFI), equivalent to 50% of Ukraine’s quota in the IMF, will help fund urgent spending needs in the short term, while helping to catalyze financing from other partners, the IMF said.

The RFI provides rapid funding to IMF member countries without the need for a full-fledged program. Members can tap the RFI repeatedly within any three-year period if the balance of payments need is caused by an exogenous shock, according to the IMF website.

It comes on top of $700 million disbursed to Ukraine by the IMF in December, and $2.7 billion in IMF Special Drawing Rights, or emergency reserves, that Ukraine received as part of an IMF allocation in August.

The World Bank’s executive board on Monday, March 7, approved a $723-million package of loans and grants for Ukraine. – Rappler.com