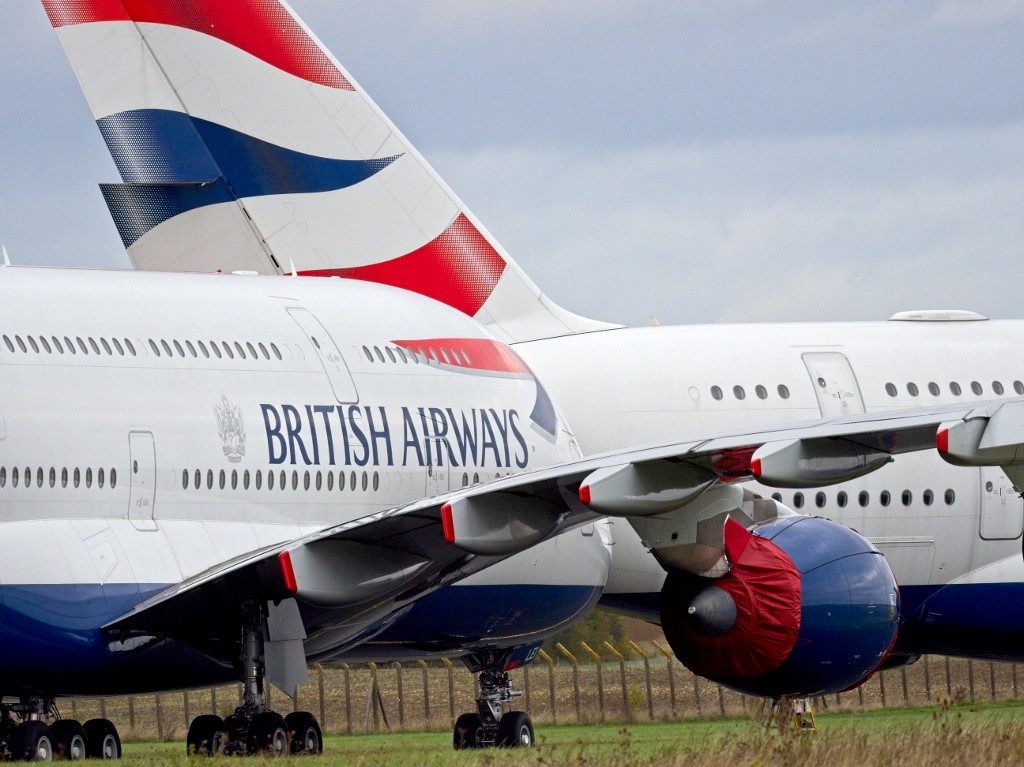 British Airways Airbus A380 aircraft stand parked at the Chateauroux-Deols 'Marcel Dassault' Airport in Deols, France, on October 29, 2020. - Many aeroplanes from several airlines are parked at the airport as a result of the downturn in air travel caused by the new coronavirus (Covid-19) epidemic. (Photo by GUILLAUME SOUVANT / AFP)

Facebook Twitter Copy URL
Copied
IAG says its losses so far in 2020 have reached 5.6 billion euros as a result of the worsening COVID-19 crisis

IAG, the owner of British Airways and Spanish carrier Iberia, dived into a net loss of 1.76 billion euros ($2.1 billion) in the 3rd quarter on coronavirus fallout, it said on Friday, October 30.

The loss after taxation in the 3 months to September contrasted with net profit of 1 billion euros a year earlier, IAG announced in a statement.

IAG added that its losses so far this year totaled 5.6 billion euros as a result of the worsening COVID-19 crisis that has decimated demand for global air travel.

The company resumed flights over the summer, following the national lockdown, but still only operates a greatly reduced volume of services.

Revenue plunged 83% to 1.2 billion euros in the reporting period, according to IAG which had already outlined its dire quarterly performance last week.

The group repeated on Friday that it suffered an operating loss before exceptional items of 1.3 billion euros, after profit of 1.4 billion euros a year earlier.

“This creates uncertainty for customers and makes it harder to plan our business effectively.”

“We are calling on governments to adopt pre-departure testing using reliable and affordable tests with the option of post-flight testing to release people from quarantine where they are arriving from countries with high infection rates,” said Gallego.

“This would open routes, stimulate economies, and get people traveling with confidence. When we open routes, there is pent-up demand for travel. However, we continue to expect that it will take until at least 2023 for passenger demand to recover to 2019 levels.”

BA, which is slashing thousands of jobs, earlier this month announced the sudden departure of Doyle’s predecessor Alex Cruz.

The European travel giant, whose portfolio also includes Aer Lingus, Level, and Vueling, is in the process of axing 13,000 jobs or more than a quarter of its workforce.

IAG’s massive jobs-slashing efficiency drive, launched in response to collapsing demand, is in line with other major carriers like Air Canada, American Airlines, and Lufthansa.

“The group has made significant progress on restructuring and we continue to reduce our cost base and increase the proportion of our variable costs,” added Gallego.

“We have also successfully completed a 2.74-billion-euro capital increase in the quarter. It strengthens our financial and strategic position and makes IAG better placed to take advantage of a recovery in air travel demand.”

Turning to the outlook, IAG warned that demand continues to be “adversely affected” by “volatile government restrictions and quarantine requirements.”

The company is not providing profit guidance for the current financial year due to chronic uncertainty on the impact and duration of the coronavirus health emergency.

IAG predicts however that it will take until at least 2023 for passenger demand to recover to pre-pandemic levels. – Rappler.com